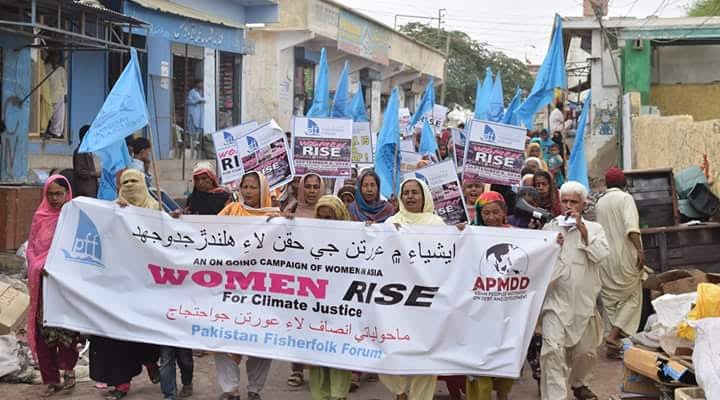 It cannot be ignored any longer: scientific studies on average temperature rises the warming of the oceans, and shrinking snow cover and melting glaciers bring us the message of a profound crisis in our global climate.

While 2020 will most likely be remembered as the year the COVID-19 pandemic hit, it was also a year in which the effects of the climate crisis continued anabated:  the dramatic melting of permafrost in Siberia; flooding and landslides in East Africa, Afghanistan and Pakistan; wildfires in Australia and California; and prolonged heatwaves and drought in Europe and many other regions.

But it is the experiences of millions of the earth’s inhabitants that tell us the real story. The climate crisis is affecting people and communities worldwide, with homes, livelihoods and in many cases, lives, lost. In the Global South, these impacts are far more devastating for vulnerable indigenous, tribal and rural communities. And the climate crisis is not gender-neutral. The Office of the High Commissioner for Human Rights’ study on climate change and gender reveals that in general, it is women who bear the brunt of the climate crisis. Pre-existing disadvantages suffered by women – a result of gender inequality – are exacerbated by the damage wrought by the climate crisis. Women’s domestic responsibilities become even harder to fulfil, and their nutrition levels, sexual and reproductive health, access to land and resources and mortality are negatively affected. At the same time, the rates of of gender-based violence, trafficking and forced marriage increase.

However, in spite of this, women are playing key roles as climate change actors and activists. Their visions for a healthy future for all are essential if we are to transform the patriarchal, fossil fuel dependent and neoliberal systems that have helped create today’s climate crisis. In this issue of Gender & Development contributors from around the world share examples of feminist responses to this, the most pressing issue of our time.

A key challenge lies in addressing the main drivers of global crises, and their localised manifestations. Feminist responses to the global climate crisis call for fundamental system changes, with a focus on a just, inclusive, regenerative, green and care-based economy. In their article Mara Dolan and Tara Daniel underline that feminists are demanding a fundamental shift in the global economy and its financial system in order to enhance human and planetary wellbeing and justice, as reflected in the Feminist Agenda for a Green New Deal. The post-COVID19 recovery offers our greatest opportunity for putting into place the kind of radical transformation such an Agenda sets out.

Indigenous and rural women are at the forefront of adapting to climate change, building climate resilience for their communities. To prevent ‘maladaptation’, such climate action needs to address patriarchal power structures and practices that create gender inequalities. In their article, CÍntya Feitosa and Marina Yamaoka describe how the women-led initiatives of Adapta Sertão in Brazil promote climate-resilient agriculture on one hand, and at the same time strengthen women’s leadership. Oxfam’s WE-Care framework builds resilience in Pakistan through the active participation of women in water governance, and a better sharing of care work. Myra Nerine Butt, Saleha Kamal Shah and Fareeha Ali Yahya’s article on this argues that women’s meaningful participation and the amplification of their voices in initiatives such as this is essential, as they hold knowledge that is key for shaping climate resilience.

Prevention of further climate change – or climate change mitigation – is vital , but women are often excluded from these efforts. Women though, are already involved with energy, agriculture and managing waste.  In the Global South, the urban poor and rural women are responsible for collecting wood, small scale farming and managing waste. Therefore, applying a full gender lens in the sustainable energy, agricultural and waste sectors, is imperative to ensure gender equality in these areas. In her article, Olumide Adisa discusses the role of Dimitra Clubs in Niger. The clubs promote  solar-powered irrigation -with an emphasis on communication and women’s active participation and leadership – and have successfully led to a gender-transformative way of addressing the climate crisis.

In the early 1990s, women from all corners of the world formulated the Women’s Action Agenda 21 to make their voices heard at the Earth Summit in Rio de Janeiro in 1992. International organisations like the Women’s Environment and Development Organization (WEDO), genderCC, and Women Engage for a Common Future (WECF) began to advocate for the recognition of women’s rights and empowerment in climate policies and action. But, as Sophia Huyer, Mariola Acosta, Tatiana Gumucio and Jasmin Irisha Jim Ilham describe in their article, it took more than twenty years for gender mainstreaming to find its way into international and national climate change policies and actions And we are still fighting!

Women’s organisations, feminist movements and individual women are actively advocating for climate justice and women’s rights. Young people are taking to the streets for Fridays for Future, and feminists active in Extinction Rebellion are making their voices heard on issues such as biodiversity and climate change. And feminist participatory action research (FPAR) is supporting the building of collective grassroots feminist movements across Asia and the Pacific. This issue of Gender & Development shares  inspiring stories underlining the importance of full feminist engagement in addressing the climate crisis, in order  to  secure the future of women, girls, gender non-binary, boys and men of all backgrounds worldwide Only together can we can change climate change!