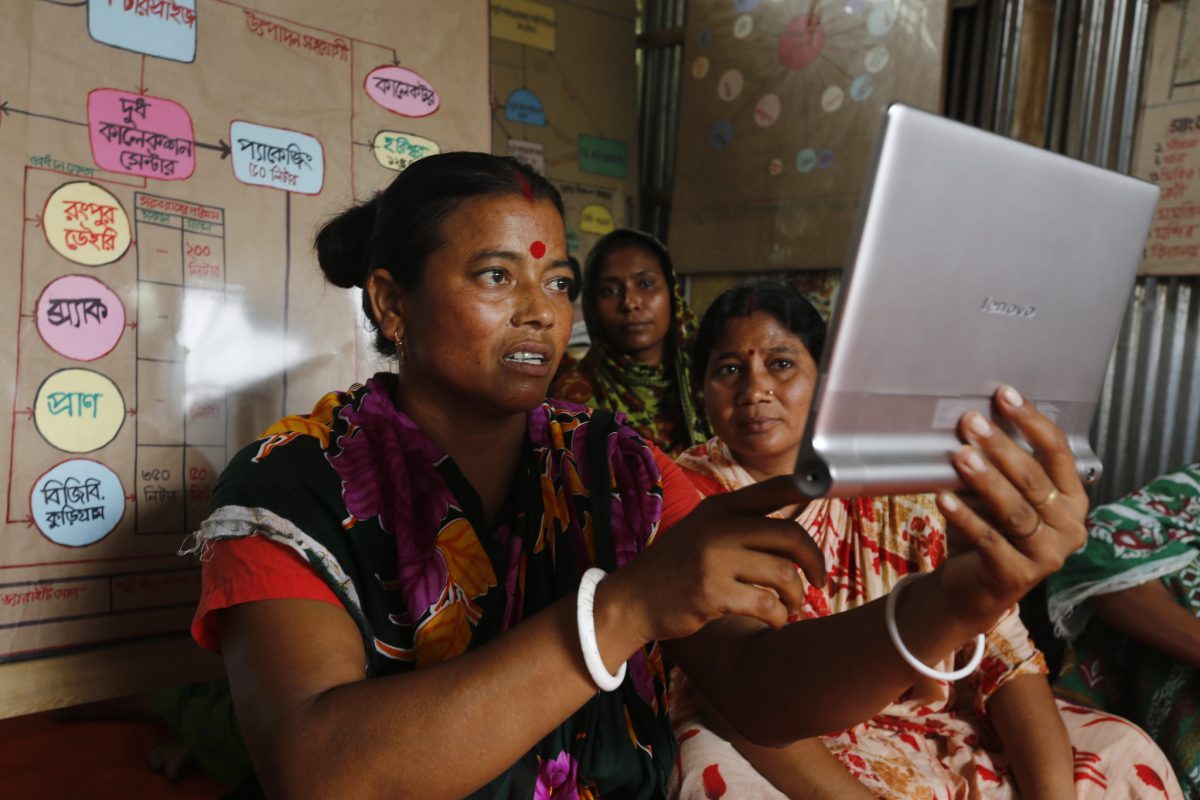 By 2020, almost three quarters of the world’s population – or 5.7 billion people – will subscribe to mobile services. The number of people using the Internet is also rising exponentially. What is this doing to us, and to the world we live in? The new issue of Gender & Development focuses on ICTs from the perspective of women’s rights and gender justice.

Women are around 10 per cent less likely than men to own a mobile phone, and in some regions the gender gap is higher: women in South Asia are estimated as 26 per cent less likely to own a mobile than men, and a staggering 70 per cent less likely than men to go on the Internet. The gender gap is a serious justice issue. For those of us with a smartphone in our pocket, ready access to digital transforms how we live, work, and relate to others. Contacting each other and sharing photos and messages is just the start. We use digital in education, in business, to find our life partner, to contact service providers, to claim our rights. Articles in this issue focus on experiences from India, Afghanistan, the Philippines, South Africa, Kenya, Jamaica, and Bolivia.  The world has transformed in little more than 20 years.

Yet the digital divide is much more complicated than any neat binary comparison between male and female ownership and online access. Gender intersects with many other aspects of difference and disadvantage including age, membership of a marginalised ethnic group, wealth/poverty, location in the world, and whether we live in an urban or rural area.  The poorest and most marginalised are clearly the least likely to have a smartphone. Writers in this issue argue that for ICTs to realise their full potential for social justice, including gender equality, we certainly need to look at the issue of access, but also beyond that, to affordability, availability and awareness, and ultimately still further, to questions of power and inequality.

In their article in this issue, Faheem Hussain and Sara Amin show how women’s access to ICTs in urban Afghanistan helps with the many challenges of daily life. Yet access is policed by men who prevent women using digital to gain knowledge that rocks the boat. ICTs and their potential to empower women can threaten men.

The complex relationship between ICTs and gender-based violence and abuse is a major theme in this issue. In his article, Dhanaraj Thakur offers findings from a study into ICTs and GBV in Jamaica. He highlights some aspects of the online environment which are argued to increase the likelihood that individuals perpetrate violence and abuse: the chance of anonymity, the fact that online exchanges are electronic and occur at a distance, meaning empathy can be reduced; and the speed at which images and messages can be sent.

It takes almost unimaginable bravery and fortitude for women continue the struggle for equality in a world of social media trolling, where online threats carry the risk of off-line violence, as well as being a form of violence in themselves. In a recent study by the Inter-Parliamentary Union, a staggering 82 per cent of women parliamentarians in different countries reported online abuse and threats, mainly through social media. The world of digital is a largely unregulated world which has obvious power for harm, as well as good. A recent extreme example of real-world violence with virtual origins is the recent murderous attack in Toronto, Canada, by the ‘Incel’ movement (misogynist men forming a collective online to discuss, incite and commit violence against women).

A range of voices in this issue focuses on feminist experiences of using digital to counter the haters, fight for equality, and end violence and abuse. We are living through the #MeToo moment, where the impact of a viral conversation about gender-based violence is currently being felt in many places worldwide and what used to be acceptable is now called out and – increasingly – punished. Divya Titus, founder of #IWillGoOut in the India tech hub of Bengalaru, shares the campaign’s experience in an article in this issue. The campaign began its life as a conversation between Facebook friends who began to organise in a spontaneous response to mass sexual assaults in the city.

Feminist accounts like this suggest that while Audré Lord may have been right to highlight the obvious contradictions in ‘using the master’s tools to dismantle the master’s house’, in an era of digital perhaps she’d reach a different conclusion!  Political action often involves adapting and repurposing ‘tools’ to serve the struggle. Feminists are using digital and re-shaping it as they go, because we have little choice and women’s rights and freedoms are at stake.

Parallel to the efforts of activists to counter violence and abuse in existing digital spaces, other feminists are challenging male and global North domination of digital design and content.  The world of digital is heavily male-dominated. Careers in tech design are disproportionately filled by men rather than women. 2012 figures showed women holding 17 per cent of jobs in tech in the UK, and 25 per cent in the US.   The campaign Whose Knowledge? is an example of intersectional feminists in action, challenging biases around gender, race and sexualities in digital knowledge creation, and supporting the creation of alternative knowledge throughout the global South.

This is the second issue of Gender & Development journal’s 25th birthday year, and we’re proud and happy to offer all its content online to both journal subscribers, and to those who cannot afford paid access. That’s true for every issue, and back issue content remains available too. Take a look at the information on how to read the journal on this website for more information. Happy reading.