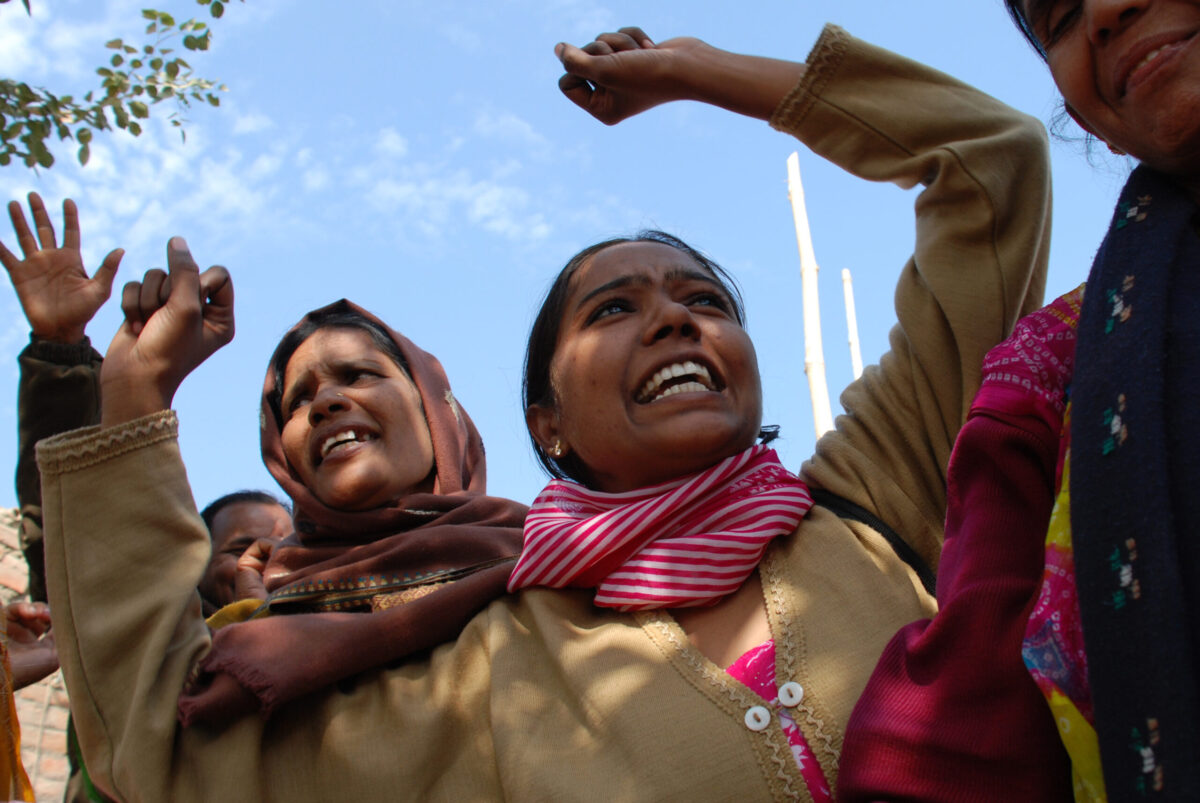 We are in unprecedented times. The world is facing impending climate disaster, the continuing COVID-19 pandemic, the global refugee and migration crises, rising levels of authoritarianism and fundamentalism – the list goes on. This issue of the journal brings together case studies and analysis in 20 articles that focus on feminist protests and politics, exploring feminist activism in a world in crisis.

In the face of the current challenges facing humanity, feminists continue to demand their rights and call for justice for all. From Sudan, where women protestors were instrumental in bringing down the government of Omar Al Bashir in 2019, to the success of the ‘Marea Verde’ (Green Wave) demonstrators in Argentina, whose campaign brought about the legalisation of abortion in 2020, feminist activists continue to make their presence felt.

In fact, we know that when it comes to securing the rights of women and girls in countries around the world, it is the collective power of strong local feminist movements that is the crucial factor in bringing about change.  As a recently-published report states, feminist activism works. The sustainability of women’s rights organisations and movements is vital, therefore. As a result, feminists within the development sector are calling for funding to be channelled directly to where it can have the most impact – the women’s rights organisations and movements themselves.

Feminist organising and activism takes many forms, from street protests and online campaigning, to the lobbying and policy work of women’s rights NGOs and work done within the sphere of ‘formal’ politics.  Feminist demonstrations in public spaces have a long history, and show no signs of stopping. In their article in this issue of Gender & Development, Gabriela Artazo, Agustina Ramia and Sofia Menoyo examine the participation of the young women of Argentina’s Green Wave. This movement has combined the less ‘visible’ elements of long-term policy work towards a particular end goal, with dramatic – and very visible – street mobilisations.

And in another manifestation of feminist street protest, The Rapist in Your Path phenomenon has spread across Latin America and beyond. This form of demonstration combines song and dance and brings women together in solidarity as they express their anger at violence against women and girls, and state inaction to combat it. In her article in this issue, Ana López Ricoy asks whether this kind of political action can be seen as a new form of South-South, transnational feminist organising.

Online activism has been identified as a key characteristic of a ‘fourth wave’ of feminist protest and movement building, and  it continues to be a defining feature – think #METOO, #NiUnaMenos, #WHYLOITER. It features in several articles in this issue including that by Martin Atela, Ayobami Ojebode, Racheal Makokha, Marion Otieno and Tade Aina, who identify the factors that led to the success of the Bring Back Our Girls (#BBOG) campaign in Nigeria.

But of course, action in pursuit of feminist goals is not limited to the streets or the digital realm, nor is it confined to women’s rights movements and organisations.

Many feminists are involved in social movements or work in institutions and organisations that are not directly concerned with gender justice. Here, they must seek to effect change from the inside. An example can be seen in the article by madeleine kennedy-macfoy, Tamara Gausi and Chidi King, which looks at Black women trade unionists working to counter the intersectional disadvantage suffered by Black and migrant women workers.

Sometimes dubbed ‘femocrats’, feminists working for development organisations and/or in the women’s policy arena tread an often a difficult path, trying to manage their own feminist ideals and demands from women’s movements on the one hand, and the institutional inertia or outright resistance from within their own organisations on the other. Susana Araujo’s article in this issue looks at the disappointing outcome for gender equality of Spanish-Peruvian negotiations on overseas development aid, and asks, do women’s rights organisations need “femocrats”?

Allies are sought, and needed, in the world of ‘formal’ politics, too. As is clear though, ‘woman’ is not synonymous with ‘feminist’, and many female politicians do not share feminist goals. Feminist movements nonetheless look to women political leaders to support their calls for change. Ramona Vijeyarasa’s article assesses the relationship between women’s movements and women leaders in the Philippines and Indonesia, and the opportunities and limitations such relationships provide.

Feminist activism continues whatever obstacles it faces. However, while it is making concrete gains in some quarters, in others it is coming up against forces that seek to halt further progress. In many cases, feminist activists are having to fight to defend existing rights from being rolled back. For example, in the Americas, while Argentinian feminists are celebrating the success of the Green Wave protests, the right to abortion is increasingly at risk in many US states. In fact, the progressive sexual and reproductive health and rights agenda agreed at the 1994 UN International International Conference on Population and Development has long been under threat from groupings of countries and religious lobbies, including the Vatican, operating inside UN fora. Here, they seek to turn back the clock on gains for women’s rights.

Ironically though, while some conservative coalitions are attempting to overturn the rights of women and gender minorities, attacking what they call ‘gender ideology’ and the threat it poses to the family and the nation, in other places, right-wing populist politicians are using the issue of women’s rights to criticise and stigmatise migrants and minorities. We can see evidence for this in the article from Daria Colella. This analyses the ‘femonationalism’ of Italian politicians, who seek to sow Islamophobic and anti-migrant sentiment by claiming Muslim and migrant men present a danger to gender equality and women’s safety.

To the list of crises we are facing as a world then, we should perhaps be adding anti-gender backlash and the deployment of the women’s and LGBTQI rights agenda not to promote equality and freedom, but to stoke division and prejudice.

Feminist protest and politics into the future

However, the dynamism, determination and sheer resilience displayed by feminist activists around the world shows us that positive change can and will come. Feminist activism as part of women-led, gender-justice focused movements, and as part of wider movements for social transformation, is a powerful force for good.  We see the tireless work of women seeking to make sure gender equality is part of climate crisis responses; successes in pursuit of reproductive rights and the strength of feminist reaction when these rights are removed; the bravery of LGBTQI activists in the face of bigotry and hatred, sustained calls for action on the epidemic of violence against women and girls, and the rise of new generations of young feminists demanding that their voices are heard – just a handful of the countless examples of the activism being so vigorously and resolutely pursued by feminists around the globe today. Everywhere, feminist protest and politics in pursuit of rights and freedom is evident, and ever more hard to ignore.