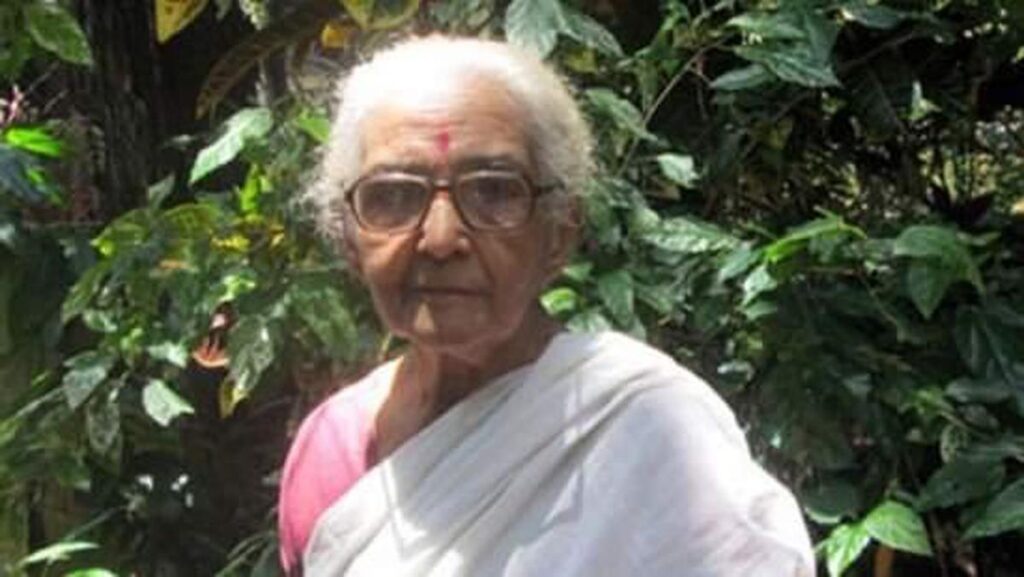 K. Saradamoni. Photo from The Hindu

I first met Sardamoni more than forty years ago, in the late 1970s. We were fledgling feminists at that time, and she welcomed us with affection, paying attention to what we thought and said, even, and especially if she disagreed with us, with refreshing openness and candor. We soon realized that she, and others who were charting out new paths through academic understanding as well as long-standing commitments to active interventions, brought formidable energy, experience and zeal to whatever they did. Saradamoni was almost invariably demanding—insisting that we think, write and act. These were not expectations that we could meet very easily, and although she was probably sometimes impatient, and even disappointed, her unflagging enthusiasm as well as expertise remained a source of inspiration, a legacy for those who were fortunate to know her.

Born in 1928, and educated in India and France, interdisciplinarity was not an abstract slogan for Saradamoni. She combined her training in ‘hard’ economics and statistics with a deep understanding and empathy for the less privileged and fieldwork amongst agricultural labourers, both women and men, often from the most deprived sections of society. While she travelled widely and remained committed to a global perspective, her roots lay in Kerala, and it was to understand and explain the specificities of the state’s polity, economy and society that she devoted considerable and consistent scholarly attention. Her scholarship was also marked by passion and commitment, which stemmed from her vision of a better world. There was no veneer of neutrality; instead, there was a determination to ask difficult questions and work through both statistics, documents and ethnographic studies to analyze and present a detailed understanding of complex structures and processes. This is evident in her work on the Pulayas of Kerala (1980) and on matriliny (1999), both of which proved to be crucial for understanding the region. Till the very end, she continued to write in Malayalam, bringing the breadth of her vision as well as the depth of her knowledge as an ‘insider’ to bear on her concerns, which were invariably wide ranging.

It was in the 1980s that I had the opportunity to work with her for some time for a conference that she organised, with the capacious title of ‘Women, Work and Society’, as part of the golden jubilee celebrations of the Indian Statistical Institute. Her daughter Asha and I were assigned the task of collating articles to serve as background material. In the process, one realized that Saradamoni was envisaging a range of connections.

The concerns that animated the project are expressed with typical clarity in the preface to the proceedings of the conference, held forty years ago, in September 1982. Saradamoni wrote:

“Work” itself has to be redefined and evaluated anew if women are to get due worth for their contribution within and outside the home. Their work very largely goes unseen, uncounted and unrecorded. Fifty per cent of the human population shares more than half the world’s workload; still they are among the underprivileged and remain invisible and stay in low-skilled and low status work. … Though not overt and clear, inequality at home has linkages to the unfairness in the wider system, the work place included. This fact cannot be easily established due to factors including ideological, conceptual and data problem. Understanding the wider system itself is becoming more difficult because of the growing complexities of the national and international systems, which is affecting the lives of women, men and children everywhere. Women’s struggle for dignity and equality, which covers a wide range of issues, cannot remain outside the struggle for a better world where better relations—social, economic, political, legal and cultural—will prevail within the house and outside, within countries and between countries. [1]

Given this perspective, it is not surprising that the very first session was devoted to a critical analysis of what was then known as the New International Economic Order, with Saradamoni making a strong case for examining its implications for the lives of ordinary people. Equally significant was the attempt to engage with scholarship on both capitalist and socialist societies, apart from an intensive focus on the Indian scenario.

Many of these ideas might seem commonplace today, and yet, the issues that Saradamoni was foregrounding and connecting remain as, if not more relevant at present. Besides, if they do appear familiar, it is because of the perseverance and the constant reiteration of the need to explore connections ranging from the domestic to the global that scholar- activists like Saradamoni highlighted relentlessly.

If Saradamoni succeeded in compelling others to acknowledge connections between the domestic with the global, this was probably in no small measure due to her everyday attempts to connect her private life with her public concerns. These flowed together seamlessly, in her preferred use of khadi, in a certain austerity and frugality, even as she was not averse to the good things of life, and on her dining table, which doubled up as a workspace—laden with papers, books, as well as with meals that ranged from the simple to the sophisticated.

It is this remarkable and rare ability to combine and connect disparate worlds, which enabled her to arrive at almost prophetic conclusions. The conference mentioned above adopted a statement, part of which reads as follows:

“The participation of women as equal partners in the economic, social and political development of the country is one of the essential conditions for successful development but it requires profound structural changes in the economy and social life in each country and at the global level. At the same time, without full participation of women on equal terms in bringing about such changes, they may become distorted and intensify inequality.

Development as the central point and principal instrument for the solution of the global problems, must be conceived in a radically different way.” [2]

The challenge of both conceptualising and working towards a radically different world remains as, if not more pressing forty years later.

Dr. Kumkum Roy is a retired professor who taught at the Centre for Historical Studies, School of Social Sciences, Jawaharlal University, New Delhi