Masculinities in the Making:
From the Local to the Global 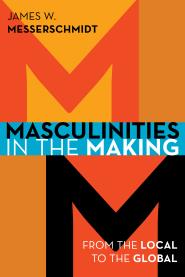 As James Messerschmidt notes in the introduction to Masculinities in the Making, this book brings together several of his previous published studies into one volume. Thus, many masculinity scholars may be familiar with both the case studies presented here, and the theoretical framing of them in terms of hegemonic masculinity (which can be defined as the form of idealised masculinity in society that reinforces the hierarchical gender relationship between men and women, and between men themselves) and structured action (in short, the everyday interactions that create and reinforce social structures such as gender, class, and race). However, even if this is so, as was the case for this reader, the book contains some revised theoretical analysis, and a new application of the theoretical concepts to the empirical case studies.

The book is organised around five major chapters, with a short introduction and a short conclusion. The first chapter revisits James Messerschmidt’s theoretical work on hegemonic masculinity, including his co-authored rethinking of the concept with Raewyn Connell back in 2005 (Connell and Messerschmidt 2005). His second chapter revises his most significant theoretical contribution to the ‘doing’ of masculinities as structured action. The next three chapters report on the application of life history methods to three quite different forms of masculinities: wimps, gender queers, and US presidents.

In revisiting hegemonic masculinity, James Messerschmidt usefully reviews a number of different masculinity scholars who have used the concept in a diversity of ways in their empirical work. These studies include research on hegemonic masculinity in a rural high school, in rap albums, in a US television programme, and among gay male sex workers, older men, and male college athletes. He notes the very different use of the notion of hegemonic masculinity, where, for example, in some studies, it is equated with masculine character traits, and in others it is contested and appropriated to challenge existing gender relations. James Messerschmidt believes that a reformulated concept of hegemonic masculinity continues to be valuable in understanding how patriarchal gender relations are legitimated and contested at the local, regional, and global levels.

For me, however, what was missing in this otherwise comprehensive review and discussion of the uses of hegemonic masculinity was its applicability outside Western contexts. Although his review includes studies in the countries of Mozambique and Mexico, no consideration is given to how hegemonic masculinity might need to be adapted for use in these and other non-Western studies. What are the problems in applying theoretical frameworks and methods developed in the West to the non-West? A number of gender scholars have argued that we cannot translate theoretical frameworks and methodologies from the global North to the global South. They have suggested that we need to examine specific masculine cultures from within. Raewyn Connell has been criticised for universalising her frameworks for studying gender and gender relations, and this criticism should be engaged with. As she herself has noted in Southern Theory (Connell 2007), Northern knowledge is embedded in many of these concepts. The question of whether researchers can adopt theoretical and methodological frameworks from the West with little adjustment to the local context warrants some discussion and it would have been appropriate, given the global as well as local focus of the book, to have explored these issues here.

Chapter Two revisits James Messerschmidt’s framework of structured action, whereby masculinity is understood as situated, social, interactional, and embodied accomplishments. In this frame, social structures are reproduced through embodied social actions. Consequently, in this view, people have the agency to break from and resist patriarchal ways of doing gender and masculinity. While James Messerschmidt acknowledges that social action is not an autonomous practice enacted by free-willed individuals, he does not address the critiques of structured action, which argue that it marginalises the structural context in which such actions take place. Numerous critics have argued that structured action neglects the structural dimensions of gender inequality. In this view, the mechanisms of power which reproduce gender inequality are obscured through the focus on face-to-face interactions between people. This raises the question of the extent to which the attitudes and actions of people who are resisting a patriarchal understanding of masculinity can effectively transform the institutional arrangement of gender. Social structural analyses of gender and face-to-face enactments of masculinity are not necessarily in opposition, however, but we need to understand more fully how the micro-level processes of enacting dominant forms of masculinity are interconnected and constrained by the macro-level structural dimension of gender inequality. I would like to have seen these connections explored more fully in this chapter.

The remainder of the book is focused on the application of structured action theory, to the case studies of wimps, gender queers, and US Presidents Bush and Obama. While the first two case studies both involve strategies for enacting forms of masculinity that are at odds with the dominant hegemonic form, the masculinity of President Bush and President Obama would seem to be the embodiment of global dominating masculinities. It is through an analysis of presidential speeches that these dominating forms of masculinity are illustrated. While Bush’s speeches represent him as the hegemonic masculine protector of the civilised world, Obama’s speeches reveal him to be equally represented as a hegemonic masculine protector. Thus, while there are some subtle difference between the enactments of masculinity of Bush and Obama, they are both equally engaged in dominating masculine practices at the global level. It is ironic that the self-representation of Bush as hegemonic masculine protector is so much at odds with what we now know about his own avoidance of active military service when he was in the armed services. It is perhaps a limitation of analysis of politicians’ speeches that the lived experiences of how these two men performed masculinity throughout their lives is not considered here.

In the final and short concluding chapter, James Messerschmidt advances ten priorities for future directions for masculinity scholars that arise from his analysis of the case studies. It is a fine way to finish the book, and it poses some excellent challenges for future research on men and masculinities. Although perhaps not ideal for complete newcomers to this field of study, in bringing James Messerschmidt’s theoretical and empirical work together in one volume, this book will be of immense value to masculinity and gender studies scholars, especially those who are exploring the research implications of hegemonic masculinity and masculinities as forms of structured action.