Gender, Development and Globalization:
Economics As If All People Mattered (Second Edition) 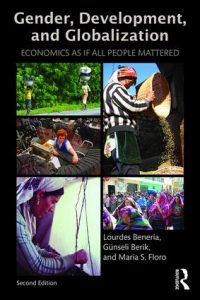 Gender, Development and Globalisation explores the implications of the social and economic processes of change triggered by globalisation for gender inequality and women’s lives across the world economy. While still making some reference to structural adjustment and to the debt crisis, which do remain key historical landmarks in the rise of neoliberalism and its ‘globalisation project’, the book also engages significantly with the impact of the 2008 financial crisis and its gendered dimension, both in the North and in the South.

The book is organised into six chapters. The first two provide a great overview of the evolution of the gender agenda in development studies and economics. Quite a lot has already been written on the paradigmatic shift from the Women and Development (WID) to Gender and Development (GAD) framework – the focus of the first chapter of the book. However, in my view, the analysis in this chapter stands out for its concise historical overview; for its engagement with the Women and Development (WAD) approach, often glossed over in much of the contemporary gender literature, and for its efforts to compare the rationale, policies, and implications of structural adjustment with those characterising the world economy after the 2008 financial crisis. The final part of the chapter provides a necessary critique of contemporary notions of ‘smart economics’, and important reflections on the limited success of processes of gender mainstreaming adopted in the international policy arena, which often turn into a mere technical exercise, constituting what Andrea Cornwall (2007) has called ‘empowerment lite’.

The second chapter provides a solid discussion of some of the key contributions of feminist economics, starting with its critique of the homogenising construct of homo aeconomicus or ‘economic man’ (in orthodox economic theories, a human being who always behaves rationally and self-interestedly) and its ideological and methodological underpinnings. In fact, the chapter maps the feminist-economics critique of major theoretical frameworks; obviously neoclassical economics, but also Marxism and institutional economics. Indeed, feminist economists have played their part in exposing the limitations of the rigid and unlikely assumptions of neoclassical economics, which represent society as the sum of atomised individuals merely engaged in maximising their own ‘utility’. However, they have also challenged monolithic conceptualisations of class and exploitation, and revealed the gendered nature of a vast array of state and non-state institutions. Across both chapters, which are two of the best in the book, in my opinion, the authors stress the relevance of Amartya Sen’s capability approach in moving the scope of the feminist critique from gender inequality to well-being, and highlight the inextricable relationship between the feminist agenda and commitments to social justice, rather than to narrow definitions of allocative efficiency or growth.

The third and fourth chapters are good review chapters centred on markets and labour under globalisation. Mainly drawing insights derived from the work of Karl Polanyi, and again on the capability approach – which seems to emerge as a key connecting thread in this volume – Chapter Three analyses the gendered implications of the internationalisation of production, the commercialisation and financialisation of everyday life, and the massive rise in inequality and vulnerability that characterise the global marketplace. The fourth chapter looks at the restructuring of labour markets under globalisation, analysing the interrelationship between work and informality across a number of countries, and briefly touching upon the debate on labour standards and corporate social responsibility. Notably, it also considers the erosion of labour rights and the change in employment patterns in the global North, and the complex gendered implications for work and livelihoods.

For me, together with Chapters One and Two of this book, Chapter Five represents a third notable addition to the literature. It provides a very useful summary of the key elements in the debate on paid and unpaid work, its meanings and measurements. The chapter presents the challenges in accounting for and measuring unpaid work, and its neglect in Systems of National Accounts. It goes on to illustrate the rationale and key features of the ‘Accounting for Women’s Work Project’, which is aimed at measuring the economic worth of unpaid activities, and reflects on the potential criticisms. While the authors engage seriously with some of these criticisms, particularly the objections raised by other feminist economists like Susan Himmelweit, Nancy Folbre, or Julie Nelson (p. 196), they maintain that the Project is relevant, unveiling as it does the costs of care, which are largely ignored in economic analysis and policy circles. Particularly compelling, in this regard, is the authors’ argument around ‘time-poverty’, inspired by the work of Claire Vickery (p. 216), and the need to understand ‘work-intensity’ as a measure of deprivation for women, given their engagement in both productive and reproductive work.

Chapter Six concludes the book. It highlights the three main problems preventing progressive social change towards ‘equitable human development’; namely the de-linking of poverty and inequality in development discourse; the paradoxical, ever-increasing entrenchment of neoliberal policies following each crisis they, in fact, manufacture; and the turning of gender mainstreaming into a technical exercise. While some of the possible alternatives indicated by the authors as fruitful follow quite intuitively from the theoretical and political inspiration of the analysis, others are rather counterintuitive, and perhaps would need further unpacking. In particular, to what extent and in what ways does a commitment to ‘people-centred development’ framed around feminism, sustainability, and social movements necessarily sit well with policies advocated by New Developmentalism, which the authors seem to see as a potentially productive avenue for women? Indeed, as also admitted by the authors themselves, many of these policies are still framed around growth-led, modernising ideas that have traditionally seen women as sources rather than beneficiaries of development. Hence, under which conditions and where could these ideas be compatible with people-centred development?

This, it seems to me, remains an open question for further investigation, rather than representing a fruitful alternative per se. In fact, it remains largely underdeveloped in the conclusions of the book. I look forward to the authors’ engagement with these issues in the future. In the meantime, this timely, engaging, and accessible second edition of Gender, Development and Globalisation should be widely read, by gender and development scholars and students, feminist economists and analysts, development practitioners, policymakers and all those concerned with the complex gendered outcomes of globalising processes.

Gender, Development and Globalization: Economics As If All People Mattered is published by Routledge
Review originally published in Gender & Development 24.2 (2016)