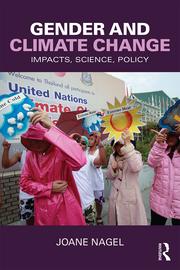 My reading of this book coincided with the UN’s major conference on climate change (UNFCCC’s 21st Conference of the Parties) in Paris at the end of 2015, extensively lauded as a success by the politicians who hosted it, and more cautiously by the media which covered the conference. The lack of attention to gender in the conference’s outcome document, the ‘Paris Agreement’, was identified with disappointment by the Women and Gender Constituency 1.

This, and two exchanges I had at the ‘Red Line’ protest in the Avenue de Grande Armee – one with a veteran male
British environmental campaigner who could not be convinced that gender inequality needs to be considered as an integral part of the causes of and solutions to climate change; the other a young woman protester wearing a T-shirt emblazoned with ‘Fuck Me Not The Planet’ – convinced me that much work remains to persuade people that climate change, and other environmental problems, are the product of particularly gendered ways of social organisation. Joane Nagel’s book is a timely contribution to this, helping readers to develop an understanding of how gender underpins climate change.

Through the course of the first four chapters of the book, Distinguished Professor of Sociology at the University of Kansas, USA, Joanne Nagel shares her own scientific journey towards an understanding of climate change.These chapters consecutively define climate change, and explain the role of gender in global warming, sea level rise and climate change science. My impression is that Joane Nagel has written this primarily for a North American audience, drawing her most powerful examples of how climate change is gendered from the USA. For me, a European feminist social scientist who has long thought about the relationship between gender and the environment, the two chapters that focus primarily on US examples of themilitary-science complex, and climate change scepticism, are the most interesting.

The extent to which military and security concerns drive American climate change research is striking, and goes a long way in explaining the extraordinarily masculinist bias in this research. I was also interested to learn about the gendered histories of arctic exploration, inwhich women’s roles (both indigenous women, and the wives of ‘explorers’) have been obliterated.

Examples drawn from Europe, Australia and the global South are better known in the gender and climate change literature I am familiar with, not least the groundbreaking Oxfam publication in 2002 2. While they serve Joane Nagel’s argument well, some of these examples, such as the Bangladesh floods of 1991, in which women’s mortality vastly outnumbered men’s, are already well rehearsed in the literature, and need only referring to. Other less familiar examples however, such as the Australian bush fires, could have been explored further. Used in the chapter on gender and global warming to illustrate how men can experience a climate change impact more severely than women, Joane Nagel compares firefighting with war fighting ‘where men test their courage and, more often than women, give their lives’ (p.43). However, in modern warfare, civilian-combatant mortality is, at a conservative estimate, 50 per cent 3.

One report examining civilian deaths in Iraq suggests that ‘female Iraqis and Iraqi children constituted the highest proportions of civilian victims when the methods of violence involved indiscriminate weapons fired from a distance: air attacks and mortars’ 4. Emerging research findings of the consequences of Australian bushfires has revealed the escalation and extent of domestic violence after the bushfires 5, themselves a result of climate change, which furthers Joane Nagel’s argument beyond that of Hurricane Katrina in the USA. Domestic violence against women and children, along with other quotidian experiences which, over time, reinforce inequality at least as much as catastrophic disasters, could have been developed in relation to Rob Nixon’s concept of ‘slow violence’ that Joane Nagel uses (p. 103) to explain how such experiences in poor countries, while not well enough documented to prove causation due to climate change, undoubtedly have an impact on people’s lives.

Joane Nagel draws quite a few parallels between the gendering of climate change and the gendering of health, medicine, and the pharma industry, on the basis that evidence of gender disparities are much better documented in the medical and pharmaceutical sciences. At times, a focus on this seems a little distracting and not sufficiently focused on climate change, although it could be pointed out that the work being done in these areas would be a good model for climate change science to emulate. However, these are minor criticisms of a book which deserves a wide reading amongst students of climate change, and environmental science more generally. The book reveals how fundamental an understanding of gender is to appreciating how climate change is produced, experienced and addressed. With the world at such a pivotal moment in determining how it should respond to climate change in order to avert catastrophe, Joane Nagel has provided a departure point for those engaged in studying and making decisions on climate change, as well as those challenging these decisions, to consider the central role of gender in this ‘greatest threat to rights in our time’ 6.