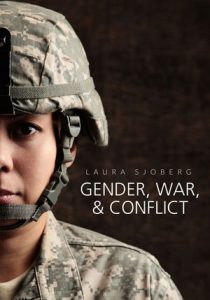 Laura Sjoberg’s new text Gender, War and Conflict is a welcome addition to the burgeoning feminist literature in International Relations (IR). Taking as her point of departure the increasing numbers of women who are now ‘actors’ in what are conventionally understood as the theatres of conflict and war, Laura Sjoberg explores the challenges posed by recent developments to not only the historic dominance of men in frontline, especially combat, roles in militaries, and the historic, intimate link between masculinity and war fighting, but also to our entire understanding of the complex gendered dynamics in conflict and war.

Her overall aim is to examine critically the relationship between gender, war, and conflict, drawing from conflicts around the world to document how this relationship plays out in varied regional, national, and cultural contexts. Laura Sjoberg begins by revisiting Cynthia Enloe’s question where are the women? (1)  She documents the varied roles that women play in conflicts and wars around the world, roles that include combatants, those who provide vital support services, those who contribute paid and unpaid labour to wartime economies, and those who organise politically in the cause of peace.

Laura Sjoberg is keen to show, however, that the gender dynamics of war and conflict cannot be understood in terms of a ‘traditional’, less still ‘natural’, gender division of labour, even as mainstream Hollywood fare (Laura Sjoberg’s example, in this instance, is Saving Private Ryan) continues to perpetuate gender myths of masculinised heroes and women who need to be ‘saved’ by the heroic male combatants, or who must wait and weep. Laura Sjoberg then locates men as men in conflict, interrogating constructions of militarised masculinities in the context of state-sanctioned violence, as well as looking at men as men in the expanding sector of private contractors in conflict and post-conflict zones, in political leadership roles, and as perpetrators of war crimes.

Throughout, Laura Sjoberg is concerned to show how representations of war – in both the media and in much of the mainstream academic literature within IR, particularly – largely perpetuate gender stereotypes and, in so doing, neglect or render invisible central aspects of gendered experience in times of war and conflict; for example, the experiences of men who are victims of sexualised violence. It is for this reason, Laura Sjoberg claims, that the study of gender must go beyond ‘men’ and ‘women’ (Chapter 4 – ‘Why Men and Women Are Not Enough’) to include diverse gender identities and sexualities and fully incorporate insights from Queer Theory and Transgender Theory.

Thus, while Laura Sjoberg’s starting point in her study is one that is now familiar to students and scholars in IR, she does a good job in taking forward some long-standing debates and discussions within feminist IR (and feminist theory more broadly), bringing her audience up to speed with current developments in the field. The later chapters in the book undertake a similar journey; discussions acknowledge debts to feminist scholarship and cite seminal texts from the 1970s and 1980s (for example, Betty Reardon, Jean Elshtain, Judith Stiehm) before moving on to contemporary research in the field. Current research includes, but is not limited to, works on gender mainstreaming and United Nations Security Council Resolution 1325.

The book is principally aimed at students. It is light on extended, explicit discussions of theory. Rather, the overall approach is eclectic, weaving specific strands of feminist and gender theory into the discussion of substantive issues and cases. Laura Sjoberg’s intention is to provide a guide to the field, setting out the broad range of gender studies in conflict and war, highlighting core literature, flagging up key issues and debates, and providing a wide variety of concrete illustrations and cases to ground discussions. The text works well as a guide to the field, and will be especially helpful to those new to this area of study. Laura Sjoberg has provided a clearly written and organised text which achieves a level of accessibility that will be welcomed by students, but which also avoids the kind of over-simplifications that might frustrate tutors keen to show just how much gender does indeed matter.

Further strengths are a wide range of empirical illustrations that are genuinely international in scope and helpful pedagogic features, such as seminar questions and web links at the end of each substantive chapter. Gender, War and Conflict will find its way on to reading lists on specialist courses on gender in IR. More importantly, perhaps, it is ideally pitched to serve as core reading on general courses on conflict and war and security studies.

The book provides a comprehensive introduction to gender, but also pushes students to not only critically reflect on gender issues in their field of study, but also appreciate how deeply gender is already embedded in their chosen field of study. As such, the book encourages students to challenge and rethink much of what is commonly presented as the core agenda and central issues on options that are still all too often presented as either gender neutral or as covering subject matter in which gender is only at best of marginal import and interest.