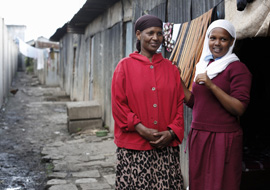 Gender & Development last focused on urban development almost two decades ago. In our March 2015 issue, we are seeking to update the picture, examining progress in supporting women’s rights and the promotion of gender equality in the context of rapid and continuing urbanisation, enduring patriarchal power relations that result in oppression, abuse and violence, and growing inequality between global elites and the poor and powerless majority. Brand new case studies from practitioners, academics and activists – on topics including participatory methods in urban planning: urban governance and accountability; Safe Cities; and urban livelihoods – make abundantly clear that the voices of women living in urban poverty need to shape policy, both as a matter of social justice, and to ensure sustainable development for humanity.

Gender & Development in published by Routledge. If you are interested in subscribing to the journal, please visit the Routledge website. (Please note the reduced subscription rates available for low and middle-income countries.)

For free access to the articles in the Inequalities issue, please visit our page on the Oxfam Policy & Practice website, and search the site using the article title or author name.

You can access the Introduction, the first two articles and the Resources Section from the Working on gender equality in urban areas issue, free, below.

Women and Civil Society in Turkey: Women’s Movements in a Muslim Society
Reviewed by Cagla Diner