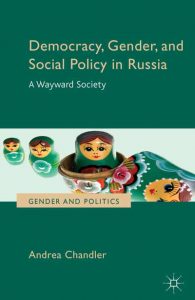 In 2013, a federal-level law banning the ‘propaganda’ of ‘non-traditional sexual relationships’ in places where it could be accessed by children was approved by the Russian parliament, the Duma, and signed into law with strong support from the Russian President, Vladimir Putin. The law provoked shock and condemnation in parts of Europe and North America, where it was seen as violating the rights of lesbian, gay, bisexual, and transgender (LGBT) people in Russia, leading to calls for a boycott of the 2014 Winter Olympics, held in Sochi in southern Russia.

But as this detailed study by Andrea Chandler illustrates, this piece of legislation did not appear from nowhere (and so, perhaps, should not have come as such a shock). Rather, it represents the latest example in a line of social policy measures detailed in this book, which are aimed at ‘protecting’ children from the moral and social ‘crisis’ that Putin and other political leaders believe has engulfed Russia. This ‘crisis’ is evident in: a falling population; a high abortion rate; child neglect, abandonment, and abuse; and high levels of alcoholism and related ill-health. Andrea Chandler argues that the roots of this ‘crisis’ are felt by Putin to lie in democratic reforms and the influence of corrupting ‘Western’ values, as well as the legacy of rapid market reforms in the 1990s (which resulted in an increase in unemployment and poverty).

The answer? A paternalist, top-down social policy that: promotes heterosexual, monogamous marriage as the only acceptable form of family; encourages couples to have at least two children; asserts the duty of Russian citizens to obey authority and serve the motherland; and sees the state’s role as guiding and protecting a ‘wayward society’, to use Andrea Chandler’s term. Inevitably, this is an approach that is highly gendered, placing unique emphasis on women’s roles as mothers, rather than workers, and men’s roles as breadwinners and as conscripted soldiers (1). So state support introduced in this period to encourage couples to have more children, in the form of parental leave, and cash grants and benefits rewarding the birth of a second or subsequent child, are only available to women, even in cases where a man is a single parent. At the same time, attempts by progressive women lawmakers to make it easier for women to be economically active have failed, such as trying to introduce legislation covering gender discrimination in the work place or increasing the number of kindergarten places. This takes little account of the fact that the majority of Russian women with young children work (and often face overt discrimination from employers), or, indeed, that there are a large number of men raising children on their own across the country.

Andrea Chandler examines the emergence of this approach to social policy from the collapse of the Soviet Union in 1991 until 2012, looking at six main issues which she sees as relevant to gender and social welfare: family law; discrimination and political representation; censorship; pronatalism (the policy of encouraging childbearing); child welfare; and conscription. Her method of investigation is to study the various relevant policy documents and laws that have been produced by the Russian legislature since 1991, as well as reports to international bodies (such as the Committee on the Elimination of Discrimination Against Women and the Committee on the Rights of the Child), media reports, and court transcripts. In addition, Andrea Chandler also analyses transcripts of debates in the Duma, providing a fascinating insight into the way that the terms of these discussions shifted during this period. As she recounts, in the 1990s (during Boris Yeltsin’s presidency), there were lively discussions around different approaches to social welfare issues in the Duma, and limited attempts to introduce liberal reforms to social welfare legislation, to encourage social inclusion and the rights and responsibilities of the individual. But with the arrival of Putin to power in the early 2000s, this gave way to a strong pronatalist, nationalist rhetoric, reflected in current social policy. I found accounts of the ‘rediscovery of the child’ (Chapter 6) as a subject of social policy (prompted by concerns over the falling birth rate, the increasing visibility of street children, and panic over the erosion of moral values, rather than a concern for children’s rights) and of ‘gender and the state in debates on conscription’ (Chapter 8) to be particularly interesting. In the latter, debates about acceptable grounds for exemption from conscription reveal the (unresolved) tension between young men’s role as soldiers and ‘defenders of the motherland’, and newer calls for them to live up to their responsibilities as fathers (something that would be interrupted by compulsory military service).

The book’s main strengths lie in Andrea Chandler’s meticulous attention to detail, the extremely comprehensive account that she gives of the evolution of social policy reform in Russia since 1991 and how this relates to wider processes of democratisation and changes in gender relations, and the huge amount of primary research that has clearly gone into this study. One omission, I felt, was any in-depth consideration of issues of ethnicity and religion in relation to pronatalist policies (and to concerns over child welfare and conscription). Panic over falling birth rates and falling moral standards has centred on Slavic Russians, and has been fuelled by pronouncements made by the leaders of the Orthodox Church. While Andrea Chandler acknowledges this, and provides statistics for much higher birth rates among Russia’s non-Slavic, Muslim populations, she does not dwell on the links between pronatalism and nationalism that I am sure would have been made in some debates in the Duma, as well as in media accounts. In addition, the way that the book is structured, with most of the thematic issues considered in each of the four (broadly chronological) sections means that the text can sometimes feel repetitive. Finally, a thorough proof read would have picked up the fair number of mistakes that remain in the text (distracting from the content).

This book provides a valuable account of the interplay of politics, gender, and social policy in Russia over this period, and will be of great interest to anyone interested in social policy, post-Soviet transitions, and contemporary politics and society in Russia. That said, the book’s discussion may be too detailed and specific to the Russian policy context to appeal to a more general audience concerned with gender issues. In addition, the author assumes quite a considerable prior knowledge of Russia’s recent political and social development, again making it less accessible to a non-specialist audience.

1 All Russian men between the ages of 18 and 27 are eligible for one year’s military service. © 2015, Joanna Pares Hoare, Independent Consultant, London, UK, email: joanna.j.p.hoare@gmail.com