Gender and Violence in Islamic Societies:
Patriarchy, Islamism and Politics in the Middle East and North Africa 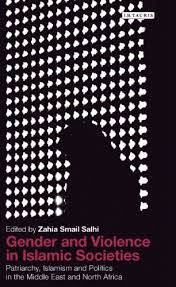 This book aims to draw out the subtle ties that link gender violence, state patriarchy, and Islamism in the Middle East and North Africa. Using a multidisciplinary approach, the book’s 11 chapters address various aspects of these ties, with a focus on the resulting violence that women face daily in private and public spaces, and that ranges from the physical to the symbolic, through violence that is cultural, social, and psychological. Both geographically representative of the diversity of the region and theoretically innovative, this collection constitutes a genuine breakthrough in the field of gender-based violence, a subject considered taboo in the region until very recently. Breaking the taboo while presenting women as agents, and not victims, of the patriarchal order is a strong aspect of the book.

And it has other strengths: a successful combination of academic and activist perspectives that make sense given the overall complexity of the region; a sound methodology that combines the quantitative and qualitative aspects of analysis; and the inclusion of research geared towards transcending description to proposing solutions, namely through more inclusive readings of religious texts.

More specifically, in highlighting the unequal power relations between men and women that pervasive patriarchy and the rise of Islam exacerbate, the book brilliantly depicts how gender-based violence is sustained by a misinterpretation of Islam, conservative political discourse, and discriminatory Family Laws in the majority of countries. This ‘dissecting’ reading of violence in an already unstable region is timely, and demands urgent action on the part of the politicians, religious authorities, and academics/activists. The strategies proposed in the book are to be welcomed. Patriarchy in the Middle East and North Africa thrives on the instrumentalisation of religion and politics, often used to maintain males’ control of women.

In each chapter, the book offers fine analysis, ample documentation, new theoretical and empirical insights, a large and clear selection of data and, generally, a convincing, well-reasoned argument. In the introductory chapter, the author lays the ground by placing the core messages of the book within a framework in which patriarchal states and Islamism inform gender negotiations. Starting from a United Nations-based characterisation of violence against women, a number of innovative theoretical issues are used to underline the main obstacles to attempts to eliminate violence in the Middle East and North Africa (MENA) region: a misinterpretation of religion with the aim of keeping the gender order intact through sustaining various types of state and male kin violence. These core ideas are in one way or another successfully conveyed in most of the subsequent chapters.

The second chapter builds on the first by pinpointing the ubiquity of gender-based violence in the form of rape, incest, and forced and early marriage under the cover of ‘preserving male honour’. In the third chapter, we see how this concept of honour is used to justify the killing of women and girls in the name of Islam. This instrumentalisation is legitimised in politics as Chapter 4 underlines in relation to Turkey. In Jordan, this legitimisation is reflected in gender discrimination in the workplace and the highlighting of women’s honour and modesty to the detriment of their self-confidence and self-worth. In the westernmost country of the region, Morocco, domestic violence is yet another form of stark exploitation of young domestic workers, beaten and mistreated in a context where such acts are not sanctioned by the law (Chapter 6). Domestic violence may also be spousal, as shown in Chapter 7, on Egypt, or in the form of genital mutilation (Chapter 8), both of which are perpetrated in the name of religion. In the last three chapters, manifestations of violence through language use are brilliantly depicted as cultural and social constructs that become legitimised by patriarchal ideology. This is shown in the way husband–wife power dynamics are played out in language, the gender-based use of expletives and profanities which are allowed only if uttered by men, as well as by the fact that women are not legally protected from verbal abuse, largely viewed as a private matter, and finally by the absence of women and girls in English Language Teaching textbooks.

In sum, while the book brings out the deep-seated gender-based violence in the socio-cultural fabric of Middle Eastern and North African societies, it underlines the agency of women in the region, and rebuts the stereotype that depicts them as passive and submissive. The book draws a meaningful picture of gender violence in the MENA region’s historical, political, social, and cultural roots and foundations that determine to this very day the status of women and ways in which they are exposed to violence. As such, the book is of significant relevance to students and faculty of the humanities, especially women’s and gender studies.

Gender and Violence in Islamic Societies: Patriarchy, Islamism and Politics in the Middle East and North Africa is published by I.B. Tauris.
Review originally published in Gender & Development 22.1 (2014)