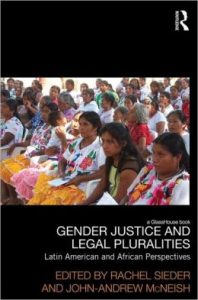 This title in the ‘Law, Development and Globalization’ series draws out issues in relation to gender justice and legal pluralities in multi-ethnic, multicultural and often multi-faith settings, illustrating that even in highly specific contexts there are no simple answers to such questions. The book comprises eight research-based chapters – four on countries in Latin America (Bolivia, Guatemala, and Mexico, which gets two) and four on African countries or regions (Mozambique, Southern and Eastern Africa, Sudan, and Tanzania). Most of the contributors are social, legal, or political anthropologists whose interest is in how gender justice and legal pluralities play out in the lives of women and men and their societies rather than in normative definitions of justice and specifically gender justice.

The detail elaborated in each chapter is enriched by the editors’ excellent 30-page overview, which sets out broader conceptual, historical, and political issues, highlighting salient points from the main contributions.

A brief review cannot capture the complexity of this discussion on ‘how gendered rights claims are made and responded to within a range of different cultural, social, economic and political contexts’ and ‘how individuals and communities are able to negotiate to protect and promote their interests within legally plural settings’ (p. 2). Rachel Sieder and John-Andrew McNeish look at legal pluralities – the co-existence and constant evolution of multiple legal frameworks, ranging from ‘custom’, ‘tradition’ and religious orthodoxies to formal statutory law at the national level, and to regional and international norms. These can generate ‘gendered forms of exclusion’ or serve as a resource allowing women to navigate and negotiate among various layers of legality and legitimacy, and often elements of both at the same time.

One shared characteristic of the Global South is the legacy of (at least) a dual legal
system, one for the former colonial power(s) and local elites, and one (or more) for the often ethnically diverse local population. The post-colonial push to ‘modernise’ often created ambivalence about ‘tradition’ and suspicion of cultural specificities and linguistic diversity, sometimes regarded as ‘backwards’ or divisive, and frequently concealing the systematic denial of the most basic rights to whole swathes of the population.  In the mid-1980s, for example, at the height of a brutal military campaign against the poor and largely indigenous population, I recall that the arrival lounge at Guatemala’s national airport boasted a superb exhibition of Mayan weavings – suggesting to the uninformed visitor that the country celebrated its indigenous peoples. Nothing could have been further from the truth. Far from this breathtakingly cynical display, refugees and displaced communities were selling off their magnificent woven garments to purchase anonymous western-style clothing. They needed to disguise their place of origin – and selling their heirlooms was both a ‘coping mechanism’ and a ‘survival strategy’, to use today’s leaden development jargon. As the editors repeatedly underscore, no rights claim or legal regime is ‘devoid of power relations and politics’ (p. 14).

Parts of Latin America now acknowledge their ‘pluricultural’ (Mexico) or ‘plurinational’ (Bolivia) nature, or are in a ‘process of partial and ambiguous multicultural recognition’ (p. 116) (Guatemala). As a result, they are grappling with ‘legal hybrids’ arising from ‘non-state’approaches to defining what is deemed unacceptable behaviour and administering sanctions. Where does this leave gender justice? Rachel Sieder and John-Andrew McNeish identify three dimensions. First, that the term implicitly acknowledges the failure of aid-assisted efforts to promote ‘gender equality’ and ‘gender mainstreaming’, and the liberal emphasis on attaining the minimum universal conditions women need in order to exercise their rights and make informed choices, to address the real sources of ‘ongoing gender-based injustices from which women suffer’ (p. 16).  A second dimension emphasises identity and cultural specificity, and is wary of assuming that women necessarily aspire to be empowered as individual agents or to challenge male domination in all its forms, largely because they define themselves and their interests in collective terms. The problem is that ‘cultural and moral relativism …is at variance with universal legal standards’ (p. 17). The third assumes that gender justice cannot be achieved in isolation from tackling gender–power relations – which entails both holding all power-holders to account if they exercise power in ways that diminish women (p. 22) while also struggling ‘for more equitable and less violent relations and for human dignity’ (p. 23). Fundamentally, ‘gender violence cannot be isolated from the structural and political violence that women suffer due to their conditions of ethnicity and social class’ (p. 61).

Precisely because contemporary situations are a product of their history, the chapters on contexts of which the reader has some prior knowledge are inevitably more accessible than those describing an unfamiliar setting. So I was struck by the account by Natalia De Marinis of the violence unleashed in the state of Oaxaca in southern Mexico following the multicultural reforms dating from the early 1990s. The growing involvement of women and of human rights organisations in giving a deeper meaning to indigenous ‘autonomy’ gave rise to widespread brutality – death threats, massacres, rape, and wanton looting and destruction of property. Local power-mongers and thugs with links to (if not the collusion of) political parties and state authorities seemed to act with impunity. But this bald statement conceals other levels of complexity. One woman broke with Triqui cultural mores by going public on having been tortured and gang raped by paramilitaries. Although the woman brought this into the public domain she did not press charges via the state justice system or accept special protective measures, signalling ‘the enormous tension that exists between individual and collective rights’, in a context where there is ‘the sense of collective subjectivity, justice and women’s agency that prevails within indigenous communities’ (p. 173).

Rachel Sieder’s chapter on Guatemala describes how the Defensoría K’iche’, an indigenous defence organisation set up by Mayan rights activists, mediated in the case of an attempted rape of a young girl. The girl’s mother had taken the unusual step of going to the public prosecutor’s office after getting no response from the village authorities. Following the young man’s confession, the Defensoría offered him the choice of submitting to a ritual beating to ‘correct’ him, or for the case to proceed through the state justice system. Despite the gravity of the charge, the Defensoría was regarded as the appropriate and legitimate authority to dispense justice. The chapter on Bolivia (John-Andrew McNeish and Ana Cecilia Arteaga Böhrt) recounts how a corrupt local official was subjected to ‘indigenous justice accepted under the new constitution’ (p. 207), which entailed sentencing him to a two-hour whipping and banishment from the community. This raised concerns that ‘the apparent sanction given to the use of customary physical punishment … has brought out the least progressive tendencies in Bolivia: often taking the character of ethnic conservatism and violence’ (p. 220). Certainly, such sanctions would appear to fall foul of Article 5 of the Universal Declaration of Human Rights, which states that ‘No one shall be subjected to torture or to cruel, inhuman or degrading treatment or punishment’, and raises issues about which legal framework should prevail in the event of major discrepancies.

This dilemma goes to the heart of many of the situations described in the volume, whereby petty crimes, offences against local custom, and ‘family disputes’ are settled via ‘traditional’ jurisdiction, while more serious matters are referred to the state judicial system. But as feminists well know, this private–public dichotomy often glosses over potentially serious cases of gender injustice, such as ‘domestic’ violence. In Tanzania (in Natalie J. Bourdon’s chapter), as in other countries, ‘family disputes’ may arise because of a tradition that dispossesses the widow of their joint property on the death of her husband. In such cases, it may be critical for women to seek non-traditional legal remedies. Where a couple came from different clans or ethnic groups, or where their religious convictions meant that they eschewed some local customs, for example, some widows have successfully appealed against the application of a narrow, clan-based definition of inheritance rights. Another strategy is to exploit discrepancies between local customary or state law and the rights converred by international conventions to which the country is a signatory, such as the Convention on the Elimination of All Forms of Discrimination Against women.

Each chapter has stand-alone validity, but the juxtaposition of case studies from a tiny handful of African and Latin American nations doesn’t quite work. This reservation aside, the volume’s wealth of grounded insights will unsettle any taken-for-granted assumptions about what gender justice means in plural legal systems.