Domestic Violence in Asia:
Globalization, Gender and Islam in the Maldives 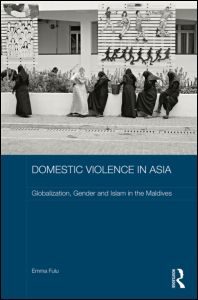 In Domestic Violence in Asia, Emma Fulu subverts the dominant direction of domestic violence scholarship by taking an alternative starting point. Rather than focusing on a linear trajectory which moves from violence to peace, the Maldives is explored in a reverse light: as a country that once experienced low levels of domestic violence now struggling to make sense of, and respond to, a mounting culture of violence. It is this reversal which structures the book’s chapters, moving from identifying ‘protective factors’ which kept domestic violence low (Chapter 2), to the changing nature of the family and gender inequality (Chapters 3 and 4), which have contributed to a purported ‘social crisis’ (Chapter 5).

Seeking to question ‘What makes the rate of violence in the Maldives so low?’ (p. 12, author’s emphasis) rather than so high (as per current orthodoxy), Emma Fulu details the ‘root causes of peace’ (p. 12). These include, but are not limited to: the flexible nature of marriage and divorce; relatively equal gender relations; non-aggressive meanings of manhood; a moderate honour/shame complex; the rarity of crime; and the strength of family community support networks.

Yet, as the book goes on to argue, it is these very foundations of peace which are being shaken by wholesale changes in socio-economic circumstances. In the context of a Maldives experiencing democratisation, globalisation, and growing Islamism, the book posits that ‘domestic violence is not static and must be recognized as a dynamic phenomenon, affected not only by local factors but also by global forces’ (p. 16). And it is spousal violence which is being fuelled within Maldivian homes by a combination of individual, familial, political, and institutional influences. Emma Fulu identifies the worsening of conditions for women in concert with trends towards: increasing urbanisation and income disparity; growth in violent crime and drug taking; the evidencing of less gender-equitable attitudes amongst young men; and democratisation enabling the spread of fundamentalist Islamic discourse.

The author also identifies two further processes at work which I found of especial interest as a feminist geographer who works on domestic violence issues in Cambodia. First, the book subtly weaves through it a discussion of the public–private binary. Emma Fulu contends that although in the recent past, Maldivian homes could be characterised by an openness and porosity, today the thresholds between public and private are materially enforced through locked doors, walls, and gates. Tracing too, a rise in conservative Islamism alongside more patriachical family discourse, it is contended that women’s spatial confinement to the home has become more prevalent, ‘reconstructing the idealized woman as a domesticated, dependent wife and mother’ (p. 90). Combine with this the relative isolation of residing in a nuclear rather than extended household (as a growing norm), and it is possible to see how intimate partner violence may take place more easily than before.

Second, I was interested to read about the emergent (geo)politics of marriage and love in Maldivian society. Tying into literatures on everyday politics, Emma Fulu’s book aptly shows how ‘Kinship, procreation, cohabitation, family, sexual relations, love – indeed all forms of close affective encounter – are as much matters of the state as they are matters of the heart’ (Oswin and Olund 2010, 62). Indeed, the Maldives has witnessed government attempts to bring about a ‘purer version of Islam’ (77) which has vilified the country’s high divorce rate. Given rising pressure to remain married, it is asserted that more women are at risk of partner violence as they are less able to leave an abusive relationship. Emma Fulu’s book thereby pushes the reader to stop and consider the axiomatic notion that marital stability is inherently beneficial to all women (Brickell and Platt 2013).

Other features of the book are also worth noting in this review. While perhaps
under marketing pressure from the publisher, Routledge, to place the title Domestic Violence in Asia first (the generalist) before Globalization, Gender and Islam in the Maldives second (the specialist), the book primarily serves as an intimate look at the gendered contemporary history of the island state. This does not preclude, however, a broader, albeit secondary, resonance with other countries of South Asia and Muslim nations in South-East Asia. By effectively drawing on national-level statistics, media analysis, interviews with politicians, and first-hand recollections from domestic violence survivors, the book also provides an invaluable resource for scholars who seek to synthesise mixed-method data in a compelling way. Emma Fulu does this expertly, bringing together her scholarly credentials and her personal connections, as well as those of a practitioner and co-ordinator of the first ever nationally representative survey on violence against women in the Maldives. Lastly, the book is immensely readable in its content, language, and style, and can be recommended to development scholars and practitioners alike. In sum, Domestic Violence in Asia is a sophisticated book which deepens our understanding of the dynamic and often contentious relationship that exists between women’s intimate (in)security and the broader transformation of a nation.