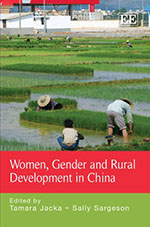 Over the last three decades China has experienced phenomenal growth rates, rapid industrialisation, and fundamental transformation of its socio-economic fabric. Its soaring economic power has been matched by a spectacular decline in the number of people living below the international poverty line. However, such economic success has also been accompanied by widening income inequalities across and within regions, and between urban and rural areas. Under the leadership of Wen Jiabao and Hun Jintao from 2002 onwards, the Chinese Communist Party ushered in a new ‘people-centred’ developmental approach that sought to address these growing disparities through ‘integrated urban–rural development’.

But what did this approach signify for rural women? To what extent have rural women been able to make use of newly available organisational, discursive, and material resources to improve their own positions in society? Alternatively, in what ways have state policies, and institutions for rural women, been deployed to construct rural women’s agency in ways that facilitated a state agenda?

The guiding question in this edited volume is whether state strategy on rural development understands rural women as an appendage to economic growth, as ‘vulnerable’ beings of ‘low quality’ in need of state protection and self-improvement, or whether it provides a means through which they become ‘empowered’ to shape their own development trajectories. The editors of this book have drawn together a rich collection of field studies carried out in different rural areas in China to explore in depth the subtle and complex ways in which women’s agency is negotiated. In particular, they explore how, on the one hand, women’s agency is configured and promoted through developmental projects, debates, and institutions and, on the other hand, how rural women’s actual behaviour and choices subvert the state’s idea of their agency. Their findings suggest that this complex intertwining of state policies, institutions, and agendas and women’s agency can have unintended consequences for gender relations, and for rural development outcomes.

The book consists of three parts. The first deals with women’s agency in the context of land reforms, leisure, and public cultural performances. The second hones in on state–non-government (NGO) interactions in land rights, population policy, and education. The final part examines the impact of NGOs, ideas about globalisation, and donor-funded projects targeting rural women. Sally Sargeson and Song Yu’s chapter in the first section, for example, tackles the thorny issue of land reform and citizenship, building upon their fascinating research in three sites in Hunan, Fujian, and Yunnan provinces. Their research highlights the importance of who is defined as a citizen in a village and how the gendered definition of citizenship affects women’s ability to benefit from land development, and to partake as a citizen in such village decisions. Their detailed empirical work draws attention to local variations in the exclusion of women from village decision-making and land rights, and the different strategies women deploy to resist being deprived of land entitlements. Lisa Eklund’s chapter in the second part, for example, on the ‘Care for Girls Campaign’, provides sharp insights into the way that state programmes can perpetuate certain gender stereotypes and norms, such as women being ‘loving and caring’, whilst failing to challenge some of the structural underpinnings of women’s different positioning, such as virilocal marriage (that is, living with the husband’s family). Yang Lichao’s analysis of gender and participation in a donor-aided project in northern China in the third part of the book, for example, highlights vividly the structural and normative limitations of seemingly empowering developmental initiatives. She recounts her own experiences of working on an internationally funded Grassland Management Project in Mongolia that sought to incorporate gender into a participatory approach. Cultural, political, and institutional context along with the gendered attitudes, norms, and capacities of local officials, local people, and project workers combined to limit women’s participation. Readers should also enjoy the contributions on gendered leisure practices by Huang Yuqin, as well as Catherine Ingram and co-authors’ depiction of cultural development amongst Kam minority women in Guizhou province. Similarly, Laura Bossen’s chapter on the gendered dimensions of reproduction and real property in rural China, and Heidi Ross’ skilful analysis of the gendered nature of schooling, provide considerable food for thought. For those seeking a critical analysis of gender and development in practice, the reflective chapters by Zhao Jie and by Sharon Wesoky will be particularly illuminating.

Women, Gender and Rural Development in China is a superbly rich volume of thickly textured, reflective, and critical accounts of gendered processes of rural development. There is no doubt that it will make a significant contribution to the field of gender and rural development. This engaging edited volume will be essential reading for students and researchers of gender, development, and China.

Women, Gender and Rural Development in China is published by Edward Elgar.