The Future of Feminism 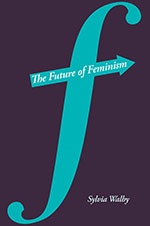 The Future of Feminism comes at a critical time in European and international politics. It provides a clear and thorough account of the contribution of feminism and its organisations, particularly within European (and also North American) contexts. It provides well-substantiated arguments with a huge amount of detail on different organisations and initiatives. Sylvia Walby’s central argument is that feminism is not dead, and that the major successes, and opportunities for its future success, lie in embedding the principles of women’s equality into social democratic and other (particularly human rights) projects.

In the first two chapters, Sylvia Walby defines her terms (including feminism), and refutes the argument that ‘feminism is dead’. In Chapters 3 and 4 (‘What Does Feminism Do?’ and ‘New Forms of Feminist Organisation’) she provides numerous illustrations of feminist organising and reaction to the challenges feminists have faced over the last four decades. Chapter 5 addresses the issue of mainstreaming, and Chapters 6 and 7 look at the broader political context, and how feminism has ‘intersected’ with other political ‘projects’ (or agendas for change). Finally, the book looks towards ‘Alternative futures’ for feminism.

Probably the main strength of the book is the level of detail on women’s organisations and movements in the UK and European Union (EU) in particular, and it is interesting to have this perspective recorded so diligently. The other real strength of the book is the way that Sylvia Walby embeds her understanding of feminism and its opportunities in her (very thorough) understanding of political philosophy, and the development of different democratic traditions in Europe and the USA.

But I’m not sure that I would agree that this is what I see as feminism, or the future of feminism. The definition used by Sylvia Walby of feminism is where the problem starts for me:

The definition of feminism in this book is inclusive. It includes some projects that do not define themselves as feminist, but nonetheless share feminist goals. It is focused on the pursuit of the goal of gender equality by individuals, groups, projects and governmental programmes, but it expands so as to encompass the wider goal of the advancement of women, on the grounds that both these goals require the project of transformation of gender relations before they can be achieved. Projects that potentially contribute to this transformation are included in this book as ‘feminist’, even if their immediate goals appear to be more limited. (p. 5)

I found the definition to be too broad and too inclusive, and so although it could trace many different activities that might contribute towards some form of equality, it lacked real analytical meaning. So, although groups such as UK feminista are included in the definition, so too are the committees of parliamentarians in both the UK and the EU who are promoting gender equality.

The trouble for me is that the interests being promoted by parliamentarians are those that include women in the mainstream economic and political structures, whereas the interests promoted by UK feminista are far more oppositional, challenging and rejecting the mainstream economic and political institutions. I found it confusing to include both in one definition of feminism, and it might have been more helpful to have acknowledged the presence of multiple feminisms, and to have made clear that this book is about one particular strand of Northern liberal/social democratic feminism that finds its natural home in the bureaucratic arenas of the UK parliament, the EU, and the United Nations (UN).

The focus on policy arenas such as the EU or the UN restricts the understanding of feminist activity, but it also fundamentally restricts how we understand feminism to be useful.

The increase in opportunities for feminists to engage with mainstream politics strengthens the likelihood that feminists will choose to develop organisational forms that further facilitate this engagement. This creates a pull towards stably organised groups and away from separatist and more spontaneous types of political activity. (p. 72)

This to me seems to further embed the understanding of feminism in the bureaucratic realms of mainstream politics, and – despite the initially inclusive definition – leave less room for more oppositional feminist politics that insist on maintaining a separate space in which to develop alternative, often critical but also often important, new ideas.

Readers of Gender & Development will also find that although the book claims to see feminism in international perspective, the material in this respect is less convincing. The context of the UN and its associated instruments and organisations is indeed important as a space for feminist activity at the international level, but it is a very particular space to which access is not necessarily equally available to all feminist organisations, particularly those from the South. I had hoped that this book might reflect some of the energy and passionate politics of feminist movements (and I will use the plural here to suggest that there are many feminist movements, who can and do ally around particular agendas) around the world. I missed the analysis developed by organisations and movements such as Isis International/Isis WICCE, JASS (Just Associates) or FIRE (Radio Feminista), or numerous other advocates of feminist analysis in different areas of the world.

However, there is no denying that this is an authoritative book. The sheer number of examples used clearly illustrates Sylvia Walby’s extensive knowledge and experience. But at times, these can appear to overwhelm the point that is being made. It is also superbly well referenced, rooting the material in wider philosophical and political literature. Although this gives the book academic credibility, it can also, at times, make it less accessible to readers who are not looking for such a thoroughly researched description.

I would recommend this book to scholars, political activists, and those interested in the feminist traditions of Europe, and to some extent also North America, and the international context of the UN. I enjoyed enormously the depth of material, particularly on the social democratic political traditions in Europe. I also found perhaps the clearest analysis of how this tradition of feminism finds synergy with the international agenda of human rights.

The Future of Feminism is published by Polity.