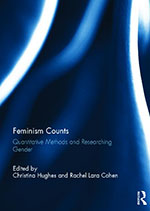 Feminist debates about methodologies – the methods used to conduct research– are of great importance to those working in the gender and development field. In fact, this journal dedicated an entire issue (15:2) to the topic, in which gender and development (GAD) practitioners and academics examined the positive and negative aspects of a variety of methodologies used to collect gender-related data. The diversity of methods explored in that issue showed that ‘there is not one method … that necessarily makes research feminist’, rather a feminist ‘research approach, or framework, is critical’ (Beetham and Demetriades 2007, 199–200). The authors of Feminism Counts: Quantitative Methods and Researching Gender, however, contend that quantitative methods have been, and continue to be, avoided by feminist researchers to the detriment both of particular disciplines and gender research goals more broadly.

Feminism Counts first appeared as a special edition of the International Journal of Social Research Methodology, and contains all but one of the original essays, seven in total (more on the missing essay later). Although the collection is not GAD specific, several of these essays will be of great interest to GAD researchers and practitioners. For example, in Chapter 2, Jill R. Williams presents her take on demography, a field that lacks serious ‘engagement with feminist theory’ (p. 10). As those working in development know well, ‘[d]emographic tools are extremely good at documenting macro-inequalities … as well as micro-level power differentials’ (p. 11), both of which are invaluable in the fight for gender justice; thus the importance of integrating a feminist perspective into this work cannot be overstated. In her section ‘doing feminist demography’ (pp. 16–18), Jill Williams provides an excellent primer on integrating feminist perspectives into demographic work which should be required reading for all demographers, as well as development officials concerned with collecting ‘gender disaggregated’ data (as mandated by many organisational as well as international guidelines).

Other chapters that will be of interest to those working in the GAD field include Chapter 5, by Sylvia Walby and Jo Armstrong, which will be of particular use for those interested in measuring intra-household inequalities, and Chapter 4, by Jacqueline Scott, of use to those working on gathering time-use data. Both chapters provide important practical knowledge on quantitative methods based on the authors’ experiences measuring gender equality in the British context. That said, Jacqueline Scott also expresses some assumptions about feminist perspectives on quantitative methodologies that I believe to be erroneous – or at least misguided – but are present in several chapters in the book (including in the introduction itself): the assumption that all feminist researchers are ‘anti’ quantitative methods.

It is important to point out, as the editors and the authors of Chapter 6 (Marianne Hester, Catherine Donovan, and Elidin Fahmy) do, that the feminist qualitative/quantitative ‘paradigm wars’ have deep historical roots. During what is commonly referred to as the ‘second wave’ of feminism (in the global North), feminist researchers decried the positivistic nature (that is to say, the emphasis put on a strictly ‘scientific’ approach) of the majority of academic research of the time, arguing that it did not capture the realities of women’s lives – and, in many cases, did not seek to gather information on women whatsoever. As quantitative methods were associated with positivism, qualitative methods became those preferred by feminist researchers. While it may be true that many feminists of that time period shunned quantitative methods, the contemporary reality of feminist researchers from all disciplines is closer to Ann Oakley’s (2000) call (widely cited in the collection, in fact) for the use of methods that are the most appropriate for the job, often meaning the inclusion of both qualitative and quantitative methods.

The review of feminist research methods textbooks by Rosario Undurraga that appeared in the journal special edition, but was left out of the book, would be useful in contesting these assumptions (and it should also be mentioned that the introduction to the book states that the review is included). Rosario Undurraga reviewed relatively recent books on feminist methods – published in 2003, 2007, and 2008 – and found that ‘the simplistic reduction of quantitative methods to positivistic assumptions is discussed and contested by all three books reviewed’ (Undurraga 2010, 277). And further, and as is noted in Gender & Development’s own issue on research methods (quoted at the start of this review), ‘[t]here is not one way of doing feminist research nor one method attributed to it; both quantitative and qualitative methods can be pro-feminist or non-feminist depending on the ways in which they are theorised and practised’ (Undurraga 2010, 278). A case-in-point is articulated by Diane Crocker in Chapter 7 where she argues that, in the case of measuring violence against women, popular quantitative surveys used to measure violence do so in a way that the focus is placed on ‘incidents in isolation from context or effects’ (p. 84), to the detriment of understanding the socio-political forces that perpetuate gender-based violence.

Indeed, from my perspective and experience – on measuring gender-based violence and women’s empowerment in the international setting – it is the continued emphasis on the quantitative that remains a serious impediment to capturing the multifaceted nature of women’s (and men’s) lives, not the predominance of qualitative research. Could more work be done to integrate gender into quantitative methods used in various fields? Yes. But it is also true that more could be done to ensure that certain disciplines take qualitative research methods seriously (and not just when qualitative data can be reduced to numeric values). And, yes, it is important, as the editors note in their introduction to the book, that our research is able to speak to policymakers and contribute to legislative and policy change on the national and international levels. In the current climate, this often means playing the ‘numbers game’, since, as Annalise Moser (2007, 7) has noted, ‘what gets measured is more likely to get addressed’. However, we should not let that game overshadow the fact that the reverse is also true – sometimes what needs to be addressed cannot be measured (at least in ways that are understood by World Bank managers or United Nations officials). Gender, in all of its nuances and intersections with race and class and sexuality, cannot be assessed through quantitative – or qualitative – methods alone.