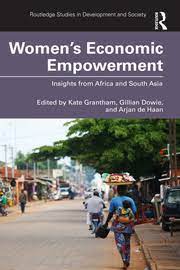 Published as part of the Routledge Studies in Development and Society Series, Women’s Economic Empowerment: Insights from Africa and South Asia is a multi-disciplinary collection based on research conducted as part of the GrOW (Growth and Economic Opportunities for Women) programme funded by the UK’s Foreign, Commonwealth and Development Office, the William and Flora Hewlett Foundation, and Canada’s International Development Research Centre. The programme aimed to generate evidence to inform social and economic policies for improving the opportunities and lives of women living in poverty while at the same time promoting economic growth.

The volume is an important and timely contribution to investigations into the relationship between gender equality and economic growth, and the challenges that women in the global South face in their efforts to become more economically empowered, and it features a wide range of rich case studies, from Burkina Faso, Democratic Republic of the Congo, Ethiopia, Ghana, India, Kenya, Nepal, Rwanda, Sri Lanka, Tanzania, and Uganda.

The volume consists of three parts, plus an introduction by the editors. In this, they provide the definition of WEE adopted by the GrOW research programme, namely the ‘capacity of women to participate in, contribute to, and benefit from growth processes in ways that recognise the value of their contribution, respect their dignity, and make it possible to negotiate a fairer distribution of the benefits of growth’ (p. 2). For the editors, the GrOW research has revealed the complex and deeply embedded systemic barriers preventing women from achieving equality both economically and socially, and in finding decent work opportunities (p. 3). Noting that the research findings from across the GrOW programme show that economic growth alone is not sufficient to bring about progress on gender equality, the editors underscore the importance of ‘addressing economic empowerment in a holistic manner…to address gender inequality and promote WEE’ (p. 7).

The first part of the book, entitled ‘Conceptualising the Relationship Between Economic Growth and Gender Equality’, lays out the theoretical and conceptual underpinnings for the rest of the volume, with an earlier version having informed the design of the GrOW programme itself. In this hugely valuable and informative section, Naila Kabeer considers pre-existing evidence from the global South on the relationship between economic growth and gender equality, and explores the ways in which wider societal gender inequalities are reproduced in the market economy, hindering women’s opportunities to engage in more inclusive patterns of economic growth. To aid her discussion of the evidence, Naila Kabeer adopts a frame of ‘continuums’: the gender and entrepreneurship continuum, characterised as ‘from survival to accumulation’ (p. 28), and the gender and wage-labour continuum, characterised as ‘from exploitative to “decent” work’ (p. 35). As part of her analytical framework, Naila Kabeer also identifies two kinds of structural constraints faced by women in the labour market. These are, firstly, intrinsic gender constraints – social norms and beliefs around masculinity and femininity at the family and kinship level – and, secondly, the constraints that operate at the ostensibly impersonal level of states, markets, and legal systems. The relevance of these frames and the role these constraints play in the lives of women are clearly apparent throughout the next two, empirical, sections of the book, in which evidence from the GrOW research programme is discussed. This first part of the book concludes that in employment-centred growth strategies, which may seem to offer opportunities for women’s economic empowerment, gender inequalities in labour market outcomes are likely to persist without policies that address gender-specific constraints.

The second part of the volume, consisting of four chapters, presents syntheses of GrOW programme research exploring the evidence on women and their economic empowerment in relation to the key areas of labour markets, macro-economics, the care economy, and social norms. The particular value of this part of the book lies not only in its presentation of the research findings, but also in the contextualisation of the research within the wider global discourse on each area, so that each chapter forms a valuable, stand-alone thematic essay. For instance, Chapter 4, ‘Developing Care: The Care Economy and Economic Development’, by Nancy Folbre, engages in a discussion on the most important findings from the GrOW-supported research alongside a broad overview of research on the care economy, and the chapter draws on other recent studies to suggest policy-level recommendations for reducing women’s care burden that would both foster women’s economic empowerment and promote economic growth.

The third section of the volume consists of five chapters, each detailing empirical studies conducted in the global South as part of the GrOW-supported research programme. These explore women’s livelihoods, and the impediments to and prospects for economic empowerment across a range of very different contexts, and this diversity is a significant and very welcome aspect of this section of the book. Chapters include an examination of gender norms in artisanal and small-scale mining, and an investigation into women’s labour force participation in the north of Sri Lanka. As well as detailing research findings on women’s participation in the labour force and the structural and sociopolitical struggles they face, this section also provides an analysis of school-to-work transitions in the sub-Saharan Africa region.

The research in the case studies has produced high-quality evidence, and has employed a diverse and innovative range of methods for data collection. The chapter, ‘Picturing Change Through PhotoVoice’, describes a community-based participatory and visual methodology through which researchers document the experiences of women living in poverty in balancing child care with work. As the authors of this chapter argue, this methodology’s strength lies in ‘the fact that it is not just researchers analysing the photographs produced during the research process, rather the participants themselves analyse, interpret, and narrate their own stories and experiences behind the photographs’ (p. 172).

As the volume is composed of ten chapters written by different authors coming from a broad variety of backgrounds, it must be highlighted that the language used and the style of writing differs from chapter to chapter. While some are much easier to read and the style is more engaging, others with more theoretical and analytical sections can be challenging for readers. And while this is not the book for those who question the whole premise of continued economic growth (regardless of any benefits it may have for increasing gender equality) on the grounds of environmental unsustainability and ecological crisis, I would, however, strongly recommend this book to graduates and undergraduates, policymakers, activists, and practitioners. For all those interested in expanding their understanding of the ways gender operates in the labour market to the general disadvantage of women, this book not only provides new evidence, but also helps illuminate some possible ways forward for the economic
empowerment of women in the global South, and beyond.