The Rise and Decline of Patriarchal Systems: An Intersectional Political Economy 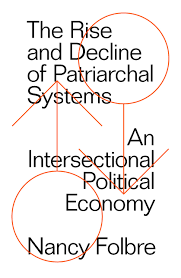 This short book certainly lives up to its big title – but then I would have expected nothing less of Nancy Folbre, always a thoughtful and thought-provoking analyst of the ‘care economy’, from Who Pays for the Kids: Gender and the Structure of Constraint (1994) and The Invisible Heart: Economics and Family Values (2001), to Valuing Children: Rethinking the Economics of the Family (2008) and Greed, Lust and Gender: A History of Economic Ideas (2009).

The titles bear witness to Nancy Folbre’s feminism, compassion, and commitment to teasing out the complex economics of the one thing that each and every human being needs from birth, through childhood, adulthood, and in death: care. While those who could afford and wanted to have always outsourced aspects of care – to wet-nurses, nannies,  boarding schools, nursing homes – Nancy Folbre reminds us that ‘[r]eliable high-quality care cannot simply be bought, because it requires empathy, connection, and commitment’ (p. 208). The cruel restrictions necessitated by the COVID-19 pandemic on accompanying the major life events of loved ones – birth, illness, death, and burial rites – have brought home that we simply cannot set a price on the value of care.

This book is divided into two parts – ‘Theoretical Tools’ and ‘Reconstructed Narratives’ – each made up of five chapters. Four of the guiding principles I highlight here, among many others I could have chosen, are first, that any ‘sustainable vision of social justice must specify both equitable rights to care and mutual obligations for its provision’ (p. 209), while the ‘unpaid and paid care of others’ is an ‘unpriced’ public good and ‘a source of immense social benefits that are not fully captured by those who generate them’ (p. 6). In other words, those, mainly women, who care for others for little pay or none generate social but not personal wealth – their ‘voluntary or coerced cooperation’ (p. 100) being its own reward.

Second, that countering a potential renaissance or, more likely, a mutation of patriarchal systems will depend on building alliances across groups divided by gender, but also by sexuality, ethnicity, age, class, and – critically in these times of mass (forced) migration – citizenship. This is not to imply that being socially assigned to or identifying with a particular group means that all or even most of its (assumed) members share the same priorities or perspectives; beneath all groups and alliances is the ‘subterranean power of conflicting interests that can seldom be reconciled simply through moral exhortation’ (p. 62).

Third, identity politics, although generally attributed to the ‘woke’ left, is and has always been, exploited by those at the top of the patriarchal capitalist pyramid to determine (and cement through laws, norms, practices, and discourse) the distribution of ‘political power…cultural discourse…and economic resources’ (p. 150) down to the majority, casting women’s semi- or total socioeconomic dependence on men, or the millions of people trapped in low-paid, low-status, dead-end work, and their material and cultural exclusion, as a question of choice for the former, and of moral failings among the latter. And, if women really want to succeed, we are encouraged to do so on men’s terms – epitomised in Sheryl Sandberg’s 2013 book Lean In, a ‘recycled version of Ayn Rand’s libertarian philosophy [which] succeeds only if life is reduced to the competitive upscale labor market’ (p. 215). Yet also, as Nancy Folbre pointedly remarks, women ‘moving into paid employment have long been described as new entrants into the labor force, as though they were doing nothing before’ (p. 135). Women’s parenting and care work is thus erased from the economy.

And fourth, that feminisms that are rooted in their own histories have the analytical capacity, confidence, and organisational potential to forge coalitions across divisive social identities that ultimately serve the interests only of those who benefit from them – whether trapping migrants in demeaning or back-breaking work and claiming that they are simultaneously ‘stealing our jobs’ and ‘sponging on the system’, the ‘glass ceilings’ that conceal prejudice against ‘subalterns’ getting above their station, attitudes that clever women are sexually unattractive to men (and
probably lesbians), to outright violence against people because of the colour of their skin, their religion, their clothing, their sexuality, their background or opinions. Drawing greater strength in working with diversity than in fragmenting into narrow identities against assaults on their common rights, feminists from the ‘global South’ alongside ‘African-American and Latino feminists’ formed ‘the vanguard of efforts to develop theories of intersectionality that encompass gender’ (p. 62). This intersectionality is precisely what we need to be alert to and resist any resurgence of patriarchal systems.

Whether dissecting economic theory, or describing the multiple ways in which patriarchal capitalism shapes our most intimate lives – whether and with whom to have sexual relations, whether, when, and with whom to have children, care for them, and pay for their upbringing, and for our parents in their old age – Nancy Folbre’s writing is deceptively simple. She has a knack for getting complex ideas and arguments across in a lucid, unfussy style. No obfuscation, no words wasted – or, for that matter, minced. At times, the sparseness is almost poetic, disarmingly profound insights captured in a pithy turn of phrase. ‘Neoclassical economists sometimes argue that women derive sufficient subjective satisfaction from their job choices – a kind of psychic income – to fully compensate them for lower wages…’ (p. 197, my italics). This set me thinking about the weekly ‘clap for carers’ in the UK. The Prime Minister, Boris Johnson, ostentatiously joined in – for the cameras – at the height of the pandemic, only to award hospital nurses (let alone all underpaid health and social care workers) a derisory 1 per cent pay rise (masking a drop from their pre-austerity earnings): performative applause was, to all intents and purposes, a psychic income for (mainly) women who are assumed to ‘choose’ a vocation for low-paid work in the caring professions. Guess what? Health professionals in the UK, thousands of them from the European Union (EU) and beyond, are voting with their feet. Shortages of health professionals were hidden in part by those trained in EU countries for whom, thanks to the hostile Brexit environment and even having to pay for their own health care in the hospitals where they work, 1 per cent was the final straw. But then, ‘[n]eoliberal policies have taken care work for granted, reassured by its longstanding provision through patriarchal channels’ (pp. 208–9). Worse, many who didn’t even qualify as ‘frontline staff’, and were not entitled to furlough pay, were exposed to a far higher risk of contracting and dying from COVID-19: bus and taxi drivers, supermarket workers, those delivering groceries or Amazon packages to online consumers, refuse collectors, ‘suffered from poor protections against infection and lack of hazard pay’ (p. 222), if indeed they had any personal protection at all.

In the end, Nancy Folbre sees cause for hope, but never for complacency. So many derive benefit from the status quo of layered systems of exploitation, or can be convinced they do, and will defend these to the hilt. They are in a position to shape ideas and aspirations: for the UK government, sciences are ‘in’, the arts (anthropology, archaeology, history, languages ancient and modern, literature, philosophy, political science, the performing arts, and even economics) are ‘out’. They can deflect blame for the harmful consequences of such choices on whatever scapegoat comes to mind. The post-pandemic world will not usher in a new and compassionate normal unless enough of us believe ‘that political rights must be accompanied not only by economic rights but also by obligations to care for one another and for the generations to come’ (p. 229). Count me in.