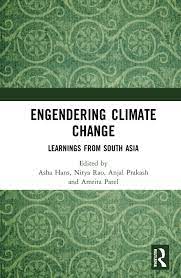 Climate change – with its rising temperatures, unpredictable weather conditions, floods, droughts, and storms surges – is a harsh reality that already impacts the lives and livelihoods of numerous communities worldwide. In Engendering Climate Change the editors, Asha Hans, Nitya Rao, Anjal Prakash, and Amrita Patel, present nine empirical case studies from India, Pakistan, Nepal, and Bangladesh. These case studies illustrate the gendered effects of climatic change on diverse groups of people, and reveal a variety of strategies that have been adopted to cope with these changes. The studies are based on research executed under the Collaborative Adaptation Research Initiative in Africa and Asia (CARIAA) programme (2014–2018), that intended to strengthen resilience of communities by informing policy and practice. The book will be of interest to researchers and students; it will also be useful for policymakers, NGOs, and think-tanks working in the areas of gender, climate change, and sustainable development.

In their introductory chapter on ‘the politics of vulnerability’, the editors emphasise that climate change aggravates pre-existing socioeconomic vulnerabilities, with geographies, and contextual and intersecting factors such as class, caste, ethnicity, and age, coinciding with gender characteristics in shaping these vulnerabilities. However, they conclude that ‘very little research is both [gender] disaggregated and contextually embedded’ (p. 1), and Engendering Climate Change is intended to contribute to filling that gap. Rather than focusing solely on the collection of sex-disaggregated data – even if this is a precondition that needs extensive efforts at all levels and within all sectors – the editors argue that research and policy needs to be based on a thorough understanding of the multiple intersecting disadvantages affecting women and men in diverse social groups, and of the opportunities available to them for adapting to climate change. Such an approach would build an appreciation of ‘the politics of vulnerability’, although this term is not explicitly defined by the editors.

The first part of this edited collection focuses on vulnerabilities. In South Asia, climate change forms an additional stressor, intensifying the existing burdens of poverty, and affecting, in geography and culture, as well as the construction of ownership of, and control over, resources and assets in Pakistan, India, and Nepal, are analysed.

As well as these factors, age, marital status (single, married, or widowed), male or female head of household, and male migration also determine gendered vulnerabilities, along with level of education, employment opportunities, and mobility. On the other hand, similar factors help define the capacity of women and men to cope with and adapt to climate change.

More specifically, the inter- and intrahousehold analyses undertaken by the chapter authors reveal the ways in which these contextual and intersectional factors determine women’s and men’s diverse perceptions of climate change, are shaped by geography (flood-prone plains versus high mountain communities), and influence the access to and use of water within the household and for irrigation for farming. Some of the studies show how in the region, conflict – not infrequently resulting in violence against women – is increasing in stressful climate conditions.¹

The second part of the book examines adaptative strategies and wellbeing. The authors of the first and fourth articles in the section emphasise how intersections of gender, caste, class, and location/geography play an important role in the access to (ground)water for domestic use and agriculture in India. They also make clear that the control over groundwater lies overwhelmingly in the hands of men, and that this has implications for women and women’s work burden, both in terms of their productive and reproductive labour. In their chapter in this section, authors Divya Susan Solomon and Nitya Rao reveal how increasing drought and groundwater dependence is leading to deep digging for borewells, creating huge indebtedness and pauperisation. Often this results in the selling of women’s personal assets, including their gold and jewellery. So, if not well regulated, the digging of groundwater as an adaptation strategy runs the risk of increasing existing gender inequalities.

The other two articles in this section focus on (internal) migration in India and Bangladesh as an adaptation strategy – or coping mechanism – in response to environmental stress and shocks. Traditionally, migration in the region is dominated by men, though some changes are visible here. Although remittances sent by male family members and greater decision-making power for women in women-headed households can undoubtedly prove beneficial, their social effects and the implications these have for gender roles and relations can be negative. Migration can result in extra workloads being put on to women’s shoulders, and in women experiencing pressure from in-laws in multi-generational families. Overall, the picture these chapters paint is one of gender roles becoming more fluid as a result of climate-induced migration.

In the concluding chapter of the book – ‘Shaping Gendered Responses to Climate Change in South Asia’ – the editors underline the importance of undertaking ‘socially-engaged research’ on lived experiences – of which this book is a reflection. Such research deepens understanding of the gendered impacts of climate change and risk management, and helps explain how vulnerabilities and agency are constructed. In the context of climatic changes, Engendering Climate Change clearly shows the need to adopt an intersectional approach that looks beyond gendered binaries, recognising that factors such as caste, class, age, ethnicity, and geographic location, as
well as inter- and intrahousehold relations are of primary importance for comprehending the reality of people’s lives. Nevertheless, as the editors point out, patriarchy determines privilege and power, and it is gendered social positions and power dynamics that are now intersecting with geographical and climate variabilities, resulting in changing roles and positions. Added to the mix, it should be noted, is the privatisation and overexploitation of natural resources, which is increasing the environmental and social pressures in the region.

While the editors stress that it is important for research and for policymakers to ‘go beyond the vulnerability paradigm and patriarchal structures to those that are inclusive to women’s agency’ (p. 233), the book itself does place a strong emphasis on vulnerability – particularly that of women. The distinction between the first and second sections of the book are not very clear: in both there is a focus on vulnerability, and less so on women’s agency and wellbeing, and generally speaking, feminists prefer to avoid a focus that depicts women primarily as victims, and not as actors. Also, in this book, it could be that the focus is somewhat skewed because while the term ‘adaptation’ (the process of pro-actively adjusting to climate change in the longer term) is regularly used, it is actually ‘coping’ – dealing with the actual climate-related circumstances in the present – that it describes. However, implicitly though, this publication does point to the need for climate adaptation strategies that are informed by nuanced, contextual, and intersectional research so that gender inequalities are not reinforced and extended, and so that vulnerability is recognised as socially and economically driven, and not an inherent human quality. Such strategies will contribute to enhancing resilience, an important lesson for (inter)national and local policies and actions.

Note
1. For a report focusing on this issue, see I. Castañeda Carney, L. Sabater, C. Owren, A. E. Boyer, and J. Wen (2020) Gender-based Violence and Environment Linkages: The Violence of Inequality, Gland, Switzerland: International Union for Conservation of Nature.