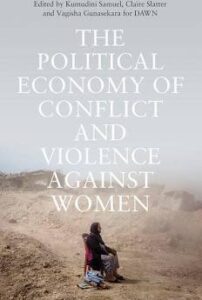 The Political Economy of Conflict and Violence Against Women: Cases from the South is a significant and timely scholarly work that examines the acts of conflict-related and wartime violence against women in the global South. The majority of international wars and conflicts are often characterised as power battles over natural resources or control of land. Feminist scholars challenge this narrative and identify structural inequalities embedded in conflicts and war, where patriarchy is being renegotiated in the household, community, and/or globally. This book is an excellent addition to this alternative, feminist literature. The Political Economy of Conflict and Violence Against Women adopts a feminist political economy approach1 and across six chapters and an introduction explains how gendered violence is deeply rooted in the domestic and international political and economic systems connected to conflict and war in the global South.

In Chapter One, a case study of the post-civil war context in Sri Lanka, Vagisha Gunasekara and Vijay K. Nagaraj explore the ways gendered social systems produce and reproduce violence that prevents women from obtaining jobs in the public sector, and buying and selling goods and services in the market place. Drawing on three years of qualitative research, the authors establish how political-economic systems of gendered violence particularly affect self-employed women. The promotion of women’s self-employment was the post-war strategy adopted by the state to reduce household poverty. However, the authors argue that the strategy was a means of further dispossession because women could not conduct business freely due to resistance from their husbands, and the lack of a ready market.

In the second chapter, Elizabeth Cox looks at the collective role played by civil society, the state, nd the extractive industries in patriarchal traditions of violence against women in two states – Hela and Jiwaka – in post- independence Papua New Guinea. The author asserts that the failure of the state to meet its obligation to protect its citizens, the non-existence of civil society, and the failure to enforce laws that safeguard women and girls are the major causes of violent actions against women. In this way, the author reveals the structural obstacles impeding efforts to end violence against women in the region.

Chapter Three examines the civil war in Columbia, and questions the ‘women-as-victim’ narrative. Cecilia López-Montaño and María-Claudia Holstine argue that women were essential contributors to the country’s peace resolution processes. The authors show that rural Columbian women created complex pro-peace activism networks that advocated for the equal distribution of resources and that sought to dismantle traditional rural gender norms. Through these networks, the women aimed to address pre-existing gender inequalities – which had been exacerbated by conflict – as part of the peace-building process.

The fourth chapter, by Roshmi Goswami, discusses the history of discriminatory laws, gender inequalities, and racism in north-east India. This structural violence has reduced the agency of its victims when it comes to deciding how to access limited social and material resources. The author identifies the way violent power relations within households, combined with broader social, economic, and political structural inequalities, place pressure on women. As a result, women are often forced into social reproduction roles that further limit their access to resources.

The case of northern Uganda is examined in Chapter Five, by Yaliwe Clarke and Constance O’Brien, and has a specific focus on the micro-politics of women’s peace activism. The population in northern Uganda has experienced violence from both the government’s law enforcement agencies and rebel groups for over 30 years. In this chapter, conflict becomes a window of opportunity for women to challenge traditional paternal familial systems, and open up avenues to engage in the peace and economic empowerment actions that have become essential sources of material support in the community. Women have started small peace groups, set up saving schemes, engaged in small businesses, harvested crops from deserted fields, and accessed financial support from international humanitarian organisations to provide for the most vulnerable. It has been women’s peace and economic activism that has empowered their call for an end to violence and for the promotion of local solutions for peace and security.

The last chapter, by Fahima Hashim, reflects on how social and cultural norms – specifically, patriarchy and traditional marriage in both Sudan and South Sudan – justify and promote violence against women. The chapter also charts how women repeatedly strive to overcome these oppressions. In both locations, women’s groups, including women in exile, women’s civil society organisations, and women politicians have resisted the normalisation of violence against women. Despite women’s repeated efforts, their needs have not been considered a priority; ignored in, for example, the creation of new state institutions and socio-economic plans in South Sudan. The chapter details the immense difficulties in both locations in securing women’s rights to equal economic, political, and social status. It concludes, however, by pointing out the progressive changes that are taking place, with the growth of feminist groups in both Sudan and South Sudan operating independently (with the funding coming from donor agencies) to challenge traditional restrictive patriarchal norms and the political regimes they inform.

The six chapters in this book are rich in empirical detail. The authors know their contexts well, and are determined to show how women in these environments are active agents who are fighting for economic and political equality, despite the obstacles. To sum up, The Political Economy of Conflict and Violence Against Women: Cases from the South successfully dismantles the traditional depiction of women from the ‘South’ as ‘just’ victims of war, and adds to emerging intersectional feminist studies. The book reveals the continuum of structural violence experienced by women during and after war. However, it also makes clear that women are always seeking opportunities to reconfigure and end structural violence in meaningful ways, from challenging traditional masculinity in rural Colombia to setting up saving schemes in Uganda. The book, therefore, is essential reading for students of gender and conflict studies, not least for the light it sheds on the
multifarious ways women contribute to peace-building processes across the global South.

Note
1. A feminist political economy approach spells out the ways in which socio-economic and political servitude renders women susceptible to violence, and clarifies the misconception that aggression against women in the private or public spheres is only generated by men (see Jacqui True 2012).