Handbook on Gender in Asia 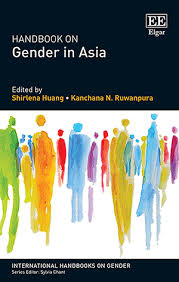 In Handbook on Gender in Asia, Shirlena Huang and Kanchana N. Ruwanpura bring together a collection of articles that discuss various gender issues in Asia. Their stated aim is to draw academic attention to gender scholarship in the global South and in works written by Asian scholars. This effort is admirable and much needed, as it not only broadens the scope of gender research but also challenges the dominance of the global North in the production of knowledge.

The book’s contents are organised into five themes. In the first theme, ‘Gender in Asia: Theory and Practice’, Anindita Datta, Wai-man Tang, and Maddy Thompson use their own research experiences to reflect on how gender, race, geography/location, ethnicity, sexuality, age, and status
intersect to shape various power dynamics in the process of research and publication. They also offer strategies for overcoming barriers and assumptions in similar research contexts in India, Hong Kong, and the Philippines. In particular, Wai-man Tang’s chapter highlights the fluidity of researchers’ gender performance in the field. Using his own ethnographic data, Wai-man Tang illustrates the nuanced contexts and responses involved when interacting with research respondents of different genders, sexualities, and ethnicities, demonstrating the complex volatility
in the research process that warrants mindful consideration.

Theme 2, ‘Gender, Ageing, and Health’, presents research concerning the ageing population, health and well-being among the elderly, parent care in Asia and transnational Asian families, and the effects of ageing on gender relations in interracial marriages. In this section, two chapters stand out for their refreshing perspectives. Lan-hung Nora Chiang and Elsie Seckyee Ho discovered that overseas Taiwanese-Chinesemen are equally devoted as their wives to taking care of their parents who stay in the home country, which challenges the stereotype that elderly care disproportionally falls on married women. Paul Statham takes a life-course approach to show how the imbalanced power dynamic in Thai-bride–Western-male marriages could dramatically change as a result of ageing.

The third theme, ‘Gender and Labour’, features five chapters on how Turkey’s informalisation of labour both increases women’s labour participation and reinforces patriarchal gender norms; how feminisation of labour in South Asia’s agriculture affects women farmers’ empowerment and reshapes concepts of masculinities and femininities; how gender, ethnicity, and migrant status intersect to affect street vending in South Asia; how modernity and modesty interweave to redefine womanhood in middle-class working Muslim women in Pakistan; and the current state of domestic work in India. As the strongest section in the handbook, these chapters are effective in helping readers gain a good understanding of varied, gendered forms of labour in different industries; how gendered work is shaped by the larger political, economic, andmigration trends; and the importance of intersectionality in gender research. They offer valuable and stark comparisons to studies undertaken in the global North, which adopt similar research approaches but generate different findings, partly because of the different social, political, economic, and cultural contexts. In particular, the first four chapters provide useful reading materials for a graduate seminar on ‘Gender and Work’.

Theme 4, ‘Gendered Migrations and Mobilities’, includes six chapters that discuss varied aspects of gendered migration, including skilled migration, older migrants’ identity negotiation, lifestyle migration, transnational parenting, and emotion. In Chapter 17, Hyonuk Lee uses a case study of Vietnamese marriage migrants in South Korea to examine the complex interconnections and processes of economic development and gendered migration at both the national and regional levels. Once again, this chapter would provide a valuable teaching resource, with Hyunok Lee’s analytical framework serving as an excellent example for graduate students in this area of study.

The last theme, ‘Gender at the Margins’, consists of four chapters that cover various topics. This section provides overviews of studies concerning different childcare arrangements for migrant workers in Cambodia, Thailand, and Myanmar; displaced Kachin people at the China–Myanmar border; violence against women in Nepal; and women’s activism in higher education. In Chapter 22, Elaine Ho offers readers a rare glimpse into the world of gendered forced migration. Her discussion of displaced Kachin women’s experiences of work, their changing notions of home and motherhood, and their participation in political empowerment add valuable insights to the limited literature on gender and displacement.

While any handbook of gender involves a selection of organising themes that are rarely comprehensive, this book’s exclusion of gender and family deviates from most handbooks on gender. Family relations and structures significantly affect and are affected by employment, health care, childcare, immigration, and education, among other aspects of gendered society. Although several chapters are relevant to family lives, the handbook’s omission of the family as a distinct theme means that it misses an opportunity to discuss this important social sphere and its interconnections with other topics in gender research.

As they explain in their introduction, the editors hope to use this volume to develop ‘new Asian feminist and gendered discourses that make sense of the local empirical realities of Asia’ as well as ‘connecting and speaking to the broader global discourse of feminism’ (pp. 1–2). This goal is only unevenly accomplished by the book’s 23 chapters. For me, the handbook lacked a concluding chapter in which the editors could have explained what their ‘new Asian feminist and gendered discourses’ might look like, and in what ways these newly developed (or developing) discourses align with or diverge from gender scholarship in the global North. In the absence of a chapter that illuminates the uniqueness of Asian feminism(s), I encourage readers of this handbook to ponder on these important questions.

Overall, the handbook is a great text for those studying gender in Asia, whether at graduate or undergraduate level. It is also a valuable introduction for graduate and undergraduate students in geography, sociology, anthropology, and global studies, and for policymakers and women’s rights practitioners who are interested in learning about gendered social life in Asia and the current gender scholarship on Asia.