Facing Patriarchy: From a Violent Gender Order to a Culture of Peace 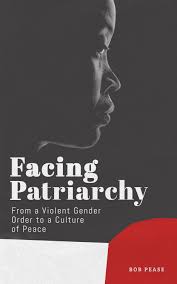 Slap!…in your face. As men, we are all complicit in violence against women, because we hold collective responsibility for this violent gender order. Facing Patriarchy is primarily aimed at an audience of pro-feminist men, while Bob Pease also intends it to be useful for women concerned with gendered violence and/or patriarchy. This is an uncomfortable read for men but stay with it and sit with the discomfort. The book is a welcome and important contribution to reviving a serious debate on patriarchy in feminism, social sciences, and gender, as well as for getting to grips with the complexities of masculinity in relation to violence. Essentially, it is focused on understanding gender-based violence as a problem of patriarchy and pointing a way out of the prison.

Introduced with a brief sketch of Bob Pease’s own history and positionality, his style is provocative and clinical. The intent is to challenge us to disengage from patriarchy and from masculinity, to come to understand it and to acknowledge our complicity and collective responsibility (as men). The content of debates and evidence on violence is intentionally challenging and the language is uncompromising in holding ‘all men’ to account, while less is said about some women’s complicity (albeit acknowledged). Bob Pease’s clinical style of testing detailed and relevant arguments through twist and turns toward logical conclusions can feel a little longwinded and dry at times, and the repeated references to all men’s complicity risks putting some readers off, perhaps a price worth paying.

The book is framed, conceptually, around ‘five pillars of patriarchy’, and it contains a wealth of theoretical and empirical material – from vintage to more recent sources. However, the narrative structure can feel a little disjointed and, while there is some helpful cross-referencing between chapters, it is sometimes difficult to follow the flow – or trajectory – of Bob Pease’s argument.

The first part of the book foregrounds Bob Pease’s argument by challenging common public health-based approaches to preventing violence against women, typically deploying socio-ecological models.¹ He presents a strong critique of their lack of theoretical rigour, and their ill-defined linkages between micro-to-macro ‘levels’, as well as their rather mystical appeal to ‘changing social norms’. This is followed by a fairly well-argued challenge to neo-liberal co-option of ‘gender’ in official (state, private, and multilateral) programmes which emphasise depoliticised versions of ‘gender equality’ and promote personal responsibility and equitable social norms, in ways that deflect from patriarchy.

Part Two presents Bob Pease’s framework for how to understand patriarchy, based on five ‘pillars’, in rough terms; men’s internalised identification with masculinity (individual), men’s abusive relations with women (relational), men’s masculinised peer-group dynamics (homosocial collective cultures), institutionalised patriarchal power relations (structural), and hegemonic ideologies or politics (ideological). Now, this does look a little like an ecological framework (and the pillars are indeed repeatedly referred to as ‘levels’ throughout the book, as they would be in a socio-ecological framework). To be fair, however, Bob Pease does a good job of explaining these as mutually reinforcing and inter-dependent, while also presenting an understanding of patriarchy which is neither limited to any particular context (but internationally linked), nor strictly limited to gender hierarchies (also intersecting with racist, elitist, and other kinds of oppression). But is violence against women enough of a lens through which to understand patriarchy?

Indeed, Part Three broadens the analysis to understand patriarchy in relation to men’s violence against other men and boys, to militarism and to environmental violence, all in thought-through and well-substantiated ways. The concern of the fourth and final part is summed up in the sub-title of the book, i.e. how do we get ‘from a violent gender order to a culture of peace’? This begins with good arguments for disrupting men’s complicity with the pillars of patriarchy and ends with ‘fostering a feminist ethic of care in men’.

A major strength of this book lies in its adding to much-needed debates about systemic patriarchy, by providing an analysis of gender-based violence within patriarchal societies, which balances structural drivers of violence, men’s agency and gendered power-relations – in interaction. Bob Pease helps his reader to understand the dynamics between men’s identification with masculinity, their relations with women, their peer-cultures, and their investment in patriarchal structures and power-relations – as mutually reinforcing, as inter-dependent, and as a form of violence. This is particularly important for academics, activists, and others concerned with engaging men and boys for gender justice. The book is also useful for mapping out and understanding many detailed arguments about men in relation to gendered violence, as well as debunking common counter-productive arguments or messaging deployed in depoliticised debates and programmes on engaging men, such as appealing to ‘good’ men’s sense of attachment to chivalry for ‘protecting women’ from ‘bad men’ (which, of course, validates male power and reinforces ideas about the need for male ‘guardianship’ of women). I find the book a little less convincing in its theoretical depth, for the lack of precision on the status of the five ‘pillars’ and how they may relate to what other writers speak of as dimensions, spaces, or kinds (e.g. of power). Furthermore, the book’s reliance on a gender binary downplays intersectional complexities and contradictions, as does its appeal to ‘all men’. Finally, while ‘backlash’ is spoken of in terms of men’s general resistance and their violence, I was disappointed not to find a more thoughtful engagement with the current wave of what is seen by many as forms of patriarchal backlash across the world. Appreciating that any book can only cover so much, this still feels like an opportunity missed, since this current wave of phenomena is clearly about much more than men and involves complex, volatile debates about reshaping societies and thus also patriarchal gender orders.

Still, face it: this is a good book. Even if some of the language it uses may not be easily understood by readers who are not already familiar with sociological and/or gender studies literatures, I strongly endorse it – to colleagues in academia, to feminist friends, and to students of gender and development as ‘highly recommended reading’ – for Bob Pease’s meticulous tracing of well-evidenced and politically sound arguments around men, violence, masculinity, and patriarchy, as well as for his coherent presentation of a framework of ‘five pillars of patriarchy’. I imagine it will also be welcomed by many critical activists in movement circles concerned with gender justice.

Note
1. Socio-ecological models come in different forms but are essentially similar in placing individual human beings as the centre of an analysis, surrounded by layers of context. Sometimes suggestively referred to as ‘the onion model’, this usually presents the individual at the centre (at the micro-level), then enveloped by a family or intimate relationships, in turn surrounded by ‘communities’, sometimes also surrounded by ‘social norms’, but then in turn usually enveloped by institutions (providing goods and services), all of which is set within a wider (macro-level) context of political systems and laws, etc. In gender and development, this then lends itself well to thinking of ‘levels of strategies’ ranging across: individual education/support, relational work, community work/collective organising, public awareness work, institutional strengthening/reform, and political strategies.