Handbook on Gender and Violence 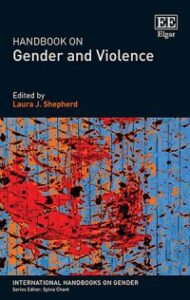 The Handbook on Gender and Violence, edited by Laura Shepherd, is a timely, feminist collection that contributes to ongoing debates around gender, violence, and gender violence. It provides a rich overview, and includes perspectives from a variety of different fields, ranging from legal studies, film studies, and terrorism studies to international relations. As well as analysing the intersection of gender and violence and its boundaries, many authors throughout the Handbook take an intersectional approach, considering various forms of identity marker – such as class, race, age, religion, ethnicity, and sexuality – in relation to violence and how it manifests itself. That said, in her introduction to the volume, Laura Shepherd acknowledges that the Handbook is not a comprehensive work – something impossible given the complexity of both concepts. Rather, it should be viewed as a collection of essays engaging with gender and violence.

The Handbook is structured in three parts: Concepts, Representations, and Contexts. The ten essays in the Concepts section explore crucial conceptual ‘tools’ for thinking about gender and violence. These include gender itself, race, intersectionality, sexuality, masculinity, the body, sex, patriarchy, femicide, and security.

It is important to point out that the language and style varies between the essays, as they are written by different authors coming from different fields. Thus, some essays might be more challenging to read than others, in particular the conceptual and more theoretical contributions.

Readers already using the concepts explored in the Concepts section might find some of the literature presented familiar. However, the authors’ critical engagement with the current debates around each of the concepts is valuable, and this section will be especially enriching for an academic audience. With their practical and empirical illustrations and suggestions, the essays in the Representations and Contexts sections may lend themselves more to a practitioner, activist, and policy making readership.

Not only in the Concepts section, but in all the essays, the authors speak to ongoing debates around their respective topics, and provide well-substantiated arguments, drawing from examples from different parts of the world. Throughout the Handbook, the authors emphasise the significant levels of feminist activism around the issue of violence, and underline that without the hard work of previous generations of feminists, contemporary discussions about gender and violence would not be possible. But this is not to say that the Handbook provides an overly positive outlook; rather it illuminates the various challenges that still need to be faced, such as the different manifestations of femicide, or harassment in the digital realm.

As a whole, the Handbook challenges the reader to reconsider what violence is, how its boundaries are fluid, and both time- and context-specific, and that these boundaries are ‘socially and culturally constructed’ (Fileborn, p. 377). This allows for only certain forms of violence to be ‘perceived’ as violence with others being ‘(il)legitimate or (in)tolerable’ (Montoya, p. 32). Overall, the Handbook points to the importance of a multifaceted approach for understanding gender and violence, and the need to refrain from using single-axis perspectives, such as only focusing on gendered or racial dynamics, and not the intersection thereof (Montoya, p. 29). Another important insight from the essays is that violence is not only material, but also discursive (Swanton, p. 161; Griffin, p. 338), and that violence, apart from being destructive, also has productive elements for organising and creating elements of life (Griffin, p. 337). Without violence ever being precisely defined in the Handbook, gendered violence is shown to be contextually distinctive but also universal across the globe (Kelly-Thompson, Lusvardi, and Weldon, p. 253).

I would recommend the Handbook on Gender and Violence to policymakers, academics, activists, and practitioners, alike. The carefully chosen contributions across the book’s three sections illuminate the complex interplay between gender and violence, a particular strength of the book being the attention it pays to intersecting and mutually constitutive identities. This makes the Handbook of relevance, in fact, not only for those working in this field, but for anyone wishing to challenge their own biases regarding the gendered dynamics of violence with which we are confronted every day.