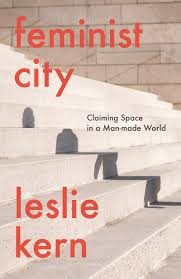 It is a circle that women can never seemingly square: our presence in public city spaces can be both a sign of social disorder and a necessity for legitimising a particular idea of the city (the ‘liberal city’, the ‘global city’). Access to city streets can be marked by fear, pleasure, possibility, and constraint. Our bodies can become part of problematic processes of commodification and urban transformations such as gentrification, but also take a stand at the forefront of activism for more just urban futures.

In Feminist City, Leslie Kern illustrates clearly the physical and psychological contortions inherent in navigating these contradictions in ‘cities of men’. She infuses dominant urban theories with a gendered perspective, for example, critiquing the absence of pregnant bodies in studies of the flâneur/flâneuserie¹ in a city of mothers, or how sociologist Georg Simmel’s ‘blasé attitude’ might be deployed, or not, by women.² There is excellent engagement with areas that have had much less attention in urban studies, such as friendship, disability, singleness, and public lavatories; an absence that is perhaps indicative of our own gendered structures within the discipline (Phadke et al. 2011).

In her overview of post-war urban transformation, the development of suburbs, segregation, and white flight – where white residents of inner cities move out as people of colour move in – Leslie Kern sets out an historical trajectory of urban planning and the systematic removal or neglect of gender in those plans. She unpicks the cluster of assumptions that urban planning is based on that have, in the past, centred on men’s needs, mobility, and physical build, while ignoring the double (work, domestic/caring responsibilities), sometimes triple (dealing with forms of exclusion such as racism), and even quadruple (managing safety) shifts of paid and unpaid labour in which women must engage.

In addition to physical barriers, Leslie Kern draws attention to the intersections of classed, racial, and cultural barriers with those of gender and sexuality. The focus on intersectionality is a highlight of the book, incorporating an honest appraisal of Leslie Kern’s own involvement in activism that may have excluded others. She does not flinch from asking some uncomfortable questions, including how women’s desire to (re)claim urban space can also reflect and perpetuate colonial practices and discourses. The auto-ethnography is interwoven throughout the book, bringing personal experience into critical urban studies, although the balance between these two tips perhaps too much towards the former in the chapter on protest. Here it would have been good to see greater engagement with other research and examples of activism, to highlight the history and complexity of protest from wider perspectives. Similarly, while the book is framed primarily as a study of cities in the global North, and cities at the centre of the author’s own research and experience, such as Toronto and London, there would be room to incorporate engagement with research from other places.

There are occasional references to work in Indian cities, for example, that feel a little superficial, whereas a deeper engagement would nuance some of the arguments being made about gender relations in cities in the global North. In other words, there is an opportunity to use the tools and theories being developed from research in cities in the global South to reflect on what is happening in cities in the global North. For example, research on public transport in Delhi (e.g. the Metro) highlights how the commute can also be now a space of pleasure, socialisation, and security, as female passengers in women-only train carriages are enclosed and shielded from a patriarchal cityscape, building on Leslie Kern’s description of the difficulties of women’s commuting in a North American context. The work of Shilpa Phadke et al. (2011) on women and public space in Mumbai would make a significant contribution to Leslie Kern’s discussion on women alone in the city, debates on respectability and conditional access to public space, whether in India or Canada.

The book also misses some of the newer debates in urban theory, including Planetary Urbanisation, which it would be useful to address, even if just to refute. For example, while Leslie Kern demarcates a spatial separation between ‘city’ and ‘suburbs’ throughout the book, there is an argument to be had as to whether these are useful units of analysis given the shifting morphology of urbanisation and conurbations extending for tens of kilometres, swallowing surrounding villages and towns.

Overall though, the book makes an excellent contribution, particularly as a teaching text in several fields, including urban and gender studies. Leslie Kern’s clear laying out of feminist urban theory and empirical work generates both a personal and critical understanding of the city. The book is well written, with passion; even raising humour as I reflected on the all too familiar impulse described by Leslie Kern to raise a middle finger at some breach of personal space in crowded, complex urban spaces. Importantly, in one of many astute observations, Leslie Kern argues for a city of possibility in which women are not afraid to take up space with our ‘too fat, too fertile, too sexual, too messy, too vulnerable’ (p. 166) bodies, imagining a different, more just city where care work and social reproduction can be more equitably shared and less exhausting to carry out.

Notes
1. A French word, flâneur (fem. flâneuse) refers to someone (historically, usually assumed to be male) who wanders the streets of a town or city at leisure, observing everyday life.
2. See Georg Simmel’s 1903 essay, ‘The Metropolis and Urban Life’.