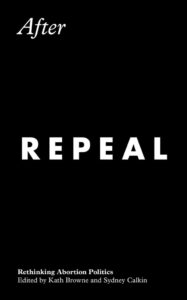 In January 2019, Ireland introduced legal abortion services, a momentous change for the promotion of sexual and reproductive freedoms. Historically, abortion had been illegal in Ireland since the country’s foundation in 1922 (p. 10). However, in a bid to inhibit any political or judicial reform, the 8th Amendment to the Irish Constitution was added in 1983, the result of a divisive national referendum. This amendment enshrined the right to life of the unborn, and consequently emboldened those who supported the already-restrictive abortion regime in the country. Over the years, a repeal campaign was galvanised by a constellation of factors, such as decisive rulings from the European Court of Human Rights and the United Nations Human Rights Committee; high profile cases that increased public awareness on the adverse consequences of abortion restrictions on women; and the sustained mobilisation and activism of a broad feminist, pro-choice movement. On 25 May 2018, a repeal referendum proved successful, and the 8th Amendment was removed from the constitution by September that year. This then catalysed the introduction of national legislation that, as authors of After Repeal point out, demonstrates the far-reaching implications of how women’s bodies are integral to state and nation-building projects and, thus, are continuously sites of political struggle.

In After Repeal, Kath Browne and Sydney Calkin bring together a collection of essays that situate the repeal of the 8th Amendment within the past, present, and future of abortion in Ireland.

This edited volume uses the contestations and mobilisation surrounding the Repeal as ‘a window into the relationship between the lived experiences of gendered subjects and the broader ideological and political structures that operate around them’ (p. 5). Distinctively, this book demonstrates how resistance to abortion reform is driven not only by the influential role of the Catholic Church in policy making, but also by the multi-layering of legacies of British colonial rule, geographies of reproductive control and access within and beyond Ireland, and in the ongoing process of constructing ‘Irishness’, which has extended from public debates to art and social media. In terms of readership, this book will appeal to academics, activists, and practitioners alike. Because After Repeal has contributions from academics, activists, and scholar-activists, readers gain both theoretical insights into abortion politics, and lessons on leveraging critical junctures and opportunities for policy reform in an otherwise unfavourable environment.

The edited volume is structured into three main sections. It begins with chapters that examine the political, cultural, geographic, and legal contexts of reproductive rights, and how these engender distinct trajectories to abortion reform in Ireland. The second section provides analyses of the campaign repertoires, frames, and strategies to the Repeal movement as these emerged dynamically in response to contemporary behavioural and material conditions, as well as in continuity with the long and historic role of Irish feminist activisms. Finally, the last section of the book looks to the future of abortion and sexual and reproductive freedom more broadly in Ireland. Here, chapters demonstrate the truly transnational or global dimension to abortion reform in that the case of Ireland ‘galvanised pro-choice activists and provoked anxieties among those who oppose abortion’ (p. 17).

Among the fascinating insights from After Repeal is the analysis of the role played by an Ghaeilge, the Irish language. Though considered by many as a minority language, an Ghaeilge proved critical in mobilising broad and strong public support for abortion reform. In Chapter 8 of the book, readers learn how the group, Gaeil ar son Rogha (Irish Speaker for Choice), forged a natural political alliance with another Irish-speaking group, the Tá Comhionannas (Yes Equality) that campaigned for marriage equality. Both the Repeal and marriage equality were framed by conservative, Catholic forces as threats to life and family, so there was clear shared political ground between the Irish-language pressure groups. However, Gaeil ar son Rogha and Tá Comhionannas were also united by the mutual goal of protecting national identity through ensuring the maintenance of Irish as a living and current language. This is interesting because opposition to sexual and reproductive freedoms is often couched in the language of protecting tradition and nation. The Irish case presents a contrasting view; showing how national identity can be mobilised in ways that broaden, rather than constrain, gender norms. Language can play a role for a truly inclusive and national discussion on sexual and reproductive freedom. This facet of Irish abortion politics is instructive for activists and health service providers alike, globally, and especially in highly diverse, linguistically and geographically fragmented societies. Another fascinating account can be found in Chapter 12, which tackles ‘heteroactivism’ and how the anti-abortion movement is not a male-dominated movement but rather involves the deliberate participation of conservative women and the harnessing of ‘prowoman’, maternal narratives. Charting the ripples created by Irish abortion reform in Canada and the UK, ‘heteroactivism’ is an interesting lens through which to map the transnational ideological opposition to bodily autonomy threading together anti-LGBT and anti-abortion groups.

In After Repeal, readers are reminded of Savita Halappanavar, whose death in 2012 has served as a catalyst for abortion reform public debates and mobilisation in Ireland (p. 11). However, the book does leave unsaid whether and how racialised dynamics played a role in broadening or restricting the gendered construction of Irish national identity. The impact of Savita’s death on her family and community is not re-examined further, nor are any other previous deaths where the linkages of mobility, immigration, and citizenship become most salient. Their addition would have provided an opportunity to speak to some of the still wider, compounded, and long-term harms engendered by restrictive abortion laws. Nevertheless, in reading this book, we are invited to rethink abortion politics, and find that this requires interrogating Ireland’s abortion reform through the lens of justice.