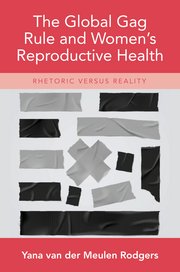 I am feminist, woman, and mother to three tween/teenage daughters – and I believe to my very core in women’s rights to abortion under all circumstances. It feels appropriate to declare this: abortion is an emotive subject, and in this book, Yana van der Meulen Rodgers clearly documents how the views, personality, and politics of different US governments  through time have shaped the sexual and reproductive experiences and rights of women across the globe.

As I write this review, there is widespread media discussion about the US state of Alabama restricting abortion in all cases, and a spotlight is being shone on abortion illegality nearer to home, in Northern Ireland. It is the first time I have seen my daughters and their friends outraged about restriction on women’s sexual and reproductive rights, and they are even more angry when I explain to them about the impact of US policy overseas – through what is widely known as the global gag rule¹ – and how this has become more restrictive with each subsequent Republican administration. There is, however, surprisingly little research to date on the impact of successive global gag rules. This is precisely why this book – which presents and synthesises evidence and dismantles rhetoric – is so important.

The Global Gag Rule provides robust and systematic analysis, using multiple methods, with a strong global lens. Its content is presented across seven chapters, and includes the history and politics of US assistance for family planning and the global gag rule itself, global abortion policies and practices, and new estimates of the impact of the global gag rule. Yana van der Meulen Rodgers draws three core conclusions from this analysis, which are convincing and clearly grounded in the multiple and mixed-methods data-sets presented. First, in most countries that receive US family-planning assistance, the global gag rule has failed to achieve its goal of reducing abortion, and the 2017 reinstatement of the rule is likely to result in more abortion globally. Second, there is no clear relationship between restrictive national abortion laws and the chances of a woman having an abortion. Put simply, restricting and/or making abortion illegal increases unsafe abortion, the need for post-abortion care, and maternal mortality. Globally, there are about 300,000 deaths associated with pregnancy and childbirth and an estimated 8–15 per cent of these are attributed to abortion. Third, the reinstatement of the global gag rule will have ‘adverse impacts across a dashboard of indicators’ and negatively impact on health outcomes for women, men, and children living in low- and middle-income countries.

Claims by women’s rights activists globally regarding the negative impact of the latest reinstatement of the gag rule under President Trump, ironically labelled ‘Protecting Life in Global Health Assistance’ are, therefore, now well-supported by evidence. Drawing on the research and  recommendations from the World Health Organization and the World Bank, Yana van der Meulen Rodgers instead argues for how integrating both family planning and safe abortion into a full range of reproductive health services will go a long way to promoting health equity and reducing maternal morbidity and mortality. She demonstrates how prioritising a broad range of productive health-care services would have more impact and be more cost-effective than the current policy, which has the net effect of marginalising and restricting both family planning and abortion.

As a geographer and applied social scientist, I was most interested in the analyses, policy narratives, and case studies that show impact through time and space. From how non-government organisations (NGOs) refusing to comply with the global gag rule reduces the availability of legal abortion services in 37 developing countries, and how organisations and NGOs that refused to sign also lost family-planning supplies, and had to cut staff in different countries (Chapter 2); to the changing policy paradigms through time, from population control to safe motherhood to women’s reproductive health (Chapter 3) and the complexity and challenges of modelling fertility and childbirth (Chapter 4).

My favourite chapter is Chapter 5, on policies and practices relating to time and place. Did you know that abortion practices and laws restricting them have existed since ancient times, and the Egyptians, Romans, and Greeks all had techniques for terminating pregnancies (e.g. fasting, bloodletting, and ingesting herbs and medicinal plants)? Abortion is currently completely prohibited or only permitted to save a woman’s life in 66 countries, one-quarter of the world’s population). The Russian Soviet Republic was the first country in the work to legalise abortion and provide free abortion care in 1920. Abortion policy and practice has also been complicated by preference for sex selection in South Asia, and the impact of the Zika virus in Latin America. I was also impressed by the agency, bravery, and strategic framing deployed by health workers and policymakers in the face of restrictions and stigma. Doctors in Senegal misclassify post-abortion cases as miscarriages to avoid police intervention. Advocates such as Eunice Brookman-Amissah (the previous Ghanaian Minister of Health) and others successfully lobbied the African Union to identify abortion as a fundamental right in a charter that considers reproductive health to be a human right.

Chapter 6 uses new econometric analysis and applies this to Demographic and Health Survey Data from 51 developing countries, covering 6.3 million women over 14 years, between 1994 and 2009. This is complex, involving the longest formula I’ve ever seen, yet Yana van der Meulen Rodgers makes the analysis and logic accessible. The results show that the global gag rule is associated with a very large increase in the likelihood of women getting an abortion in Latin America and the Caribbean (where there are the most restrictions on abortion) with the next highest increases in sub-Saharan Africa. Only in South and South-East Asia did the policy appear to reduce abortion rates.

You should read this book if you work in public health, maternal health, or reproductive and sexual health, if you work with NGOs or governments, if you are aUS tax payer or if you are a concerned citizen. You should also read this book if you are a student, advocate, or researcher who is interested in understanding a critical and fair analysis of the strengths and weaknesses of different methodological approaches and how learning can be transparently synthesised into clear and compelling arguments. Women’s lives are at stake, and hence this is critically important reading.

1. The global gag rule, also known as the Mexico City policy, restricts any overseas organisation that receives US global health funding from engaging in any abortion-related activity, be it service provision or referrals, or the giving of advice and information (hence the term ‘global gag’), even where abortion is legal in that country, and where the organisation is using its own funds. First enacted by President Ronald Reagan in 1985, it has been rescinded by the two Democratic presidents to date, only to be reinstated during Republican presidencies. The version of the global gag rule as implemented by Donald Trump is the most restrictive yet.