Human Capital in Gender and Development 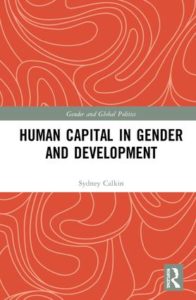 Finding room to say something striking in a field as over-subscribed as gender and the governance of development is nothing if not challenging. Sydney’s Calkin’s 2018 book, Human Capital in Gender and Development, makes a concerted effort both to speak clearly to the voluminous intellectual heritage to which her work owes an obvious debt, and to push poststructural feminist political economy ¹ scholarship into timely, contemporary ground.

Human Capital in Gender and Development offers, firstly, a critique of what is labelled ‘human capital theory’ (which as Sydney Calkin puts it, ‘re-imagines humans as a form of capital and reimagines wages as a return on capital’, p. 3); second, a reflection on the significance of the ‘gender equality as smart economics’ agenda of key development actors, such as the World Bank; and, third, a deconstruction of the implications of seeking to ‘unlock’ the potential of the world’s women (and girls) for economic development. The book begins by acknowledging how central the faces of women and girls have become to the global development machine, their economic productivity a buzzword for successful development policymaking in the contemporary era. While feminists have, of course, been working to get gender on the agenda, so to speak, of governance and development for many years, Sydney Calkin suggests that something significant has emerged in the most recent years following the global financial crisis, based on a political discourse of ‘tapping’ into women’s economic potential, and recognising ‘gender inequality as a producer of economic, social, and political inefficiencies’ (p. 2). Evidence for this can be seen in the publication of the 2012 World Development Report (‘Gender Equality and Development’), the recent and notable turn to corporate-inspired ‘girl effect’ discourse, and the many public–private partnerships that now seek to ‘tap’ women’s economic agency in development, all of which Sydney Calkin discusses in detail.

I found Sydney Calkin’s poststructural approach to her subject material both highly appropriate, and well-sustained throughout the course of the book. In her justification for preferencing the work of poststructuralist thinker Michel Foucault in her analytical strategy, Sydney Calkin takes pains to show an awareness of the use of ‘big name’ male theorists in a feminist text, and I appreciated this. I am already persuaded by a poststructural approach to gender and development ², but what Sydney
Calkin’s book does so well is to highlight simultaneously the ways in which poststructural analysis reveals both the regulatory practices and the possibilities of the governance of development. Poststructural work is often much maligned in the political sciences, as Sydney Calkin discusses in Chapter Two, but not often by people who understand its core engagements and potential. So, it was something of a relief for me to read an entire book dedicated to advancing a relatively small, but significant, sector of feminist international political economy research. I could not agree more with the argument (p. 179) that it is ‘not merely the case that gender equality is commodified and employed to sell things’, and that what might be more valuable to note is ‘the way that the human capital logic of girls and women as untapped resources is employed to legitimise new forms of corporate authority in the development process’. This, for me, is evidence enough of the critical and transformative potential of  poststructural research in and of development, and shows Sydney Calkin’s commitment to research with material application.

To date a lot has been said about gender and development, and a lot will continue to be said about gender and development. This makes it, for me, one of the most interesting, and dynamic, areas of scholarly inquiry, and I appreciated the timeliness of Sydney Calkin’s particular intervention, which engages respectfully with previous discussions and debates, while pushing forward poststructural feminist knowledge and practice. Sydney Calkin’s book fittingly captures the ways in which we might continue to engage critically with assumptions about, and practices of, gender and development. I agree, ultimately, that the Smart Economics agenda extends neoliberal governance in interesting but problematic ways, and cannot be read either as façade or corporate mask. The question of feminism’s co-optation is ongoing, but always worth posing. For me, Sydney Calkin’s
book adds an important contribution to knowledge and existing debate, making it a valuable resource for interested students and scholars, and an intervention in the gender/governance/development debate that should stand the test of time.

1. By poststructural feminist political economy, I refer to a diverse body of feminist and gender political economy research that critiques both the production of knowledge in and for the global political economy and the practices of power that shape it. This research challenges the takenforgrantedness of dominant ideas and assumptions in the global political economy to show how these rest on gendered foundations, such as the myth of Economic Man that underlies modern Economics, or the central figure of the market in the neoliberal globalisation thesis. Poststructural feminist political economy challenges conventional, rationalist accounts of what drives our socio-economic systems while eschewing dichotomised, hierarchical, and essentialised thinking, revealing the constitution and effects of gendered privilege across economic knowledge and practice (in the privileging, for example, of liberal values in the conditionalities and ‘benchmark’ standards of international organisations, or the exploitation of gendered stereotypes to maintain state war machines, flexibilised labour conditions, or corporate globalisation, and so on).

2. Poststructural approaches to gender and development take seriously that the dominant meanings of both gender and development are produced by and through social, cultural, political, and economic relations of power (or the way power is organised and diffuses across societies). These relations include, but are not limited to, the practices and processes of neoliberal restructuring, governmental planning and policymaking, economic organisation, poverty, social reproduction, globalisation, and labour markets. In particular, poststructuralists interrogate critically the formation and effects of Eurocentric and gendered development discourses and assumptions, which means that they examine how development is written and practised in ways that privilege certain types of identity, behaviour, or knowledge, and what the effects of this might be.