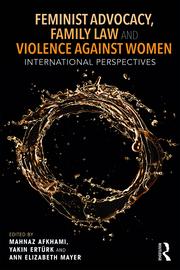 Around the world, the body of laws governing areas such as marriage, divorce, child custody, and inheritance are known as family law, also called personal status laws in some countries. Often religiously based, these laws have long been the focus of protest from women’s rights activists, who argue that they discriminate against women, and are used to justify violence against them.

Feminist Advocacy, Family Law and Violence Against Women; International Perspectives is a useful book for anyone engaging in women’s rights advocacy in this area. The book showcases a range of strategies and tools deployed by women’s rights activists in their pursuit of legal reform in relation to violence against women, and provides insights into obstacles encountered and lessons learnt.

The cross-country overview (Chapter 2) sets out these challenges and lessons learnt very clearly, and is a helpful guide for women’s rights activists who are navigating their own advocacy campaigns. For example, it includes an instructive discussion on how the pluralistic societies of countries like India and Lebanon, while providing space for democratic engagement, also complicate the drive to advance women’s rights reforms because family law differs between religious groups.

The case study of India focuses on violence against women in the family, and the linkage between domestic violence and gender-based discrimination in family laws. This is a particularly well-written analysis of the movements that drove reforms, including the use of courts to challenge discrimination in religious laws, such as the Supreme Court of India’s ruling to strike down the arbitrary practice of triple talaq (divorce) against Muslim women.

The interview with Moroccan women’s rights campaigner Rabéa Naciri provides fascinating first-hand insights into the reform of the Family Code in Morocco, including on how the women’s movement pushed for such reforms. One lesson learned is that by being debated in Parliament it allowed for a democratic discussion on the proposed reforms.

The Convention on the Elimination of All Forms of Discrimination against Women (CEDAW) appears to have been useful to the women’s rights movements in a variety of contexts, helping to create momentum and moving the needle on various issues. The Brazil case study highlights how the movement used the CEDAW Committee’s recommendation to push for the adoption of the Maria de Penha Law relating to domestic violence, in 2006.

The case study on Iran reflects on the long history of women’s rights activism in the country, key areas where gains, if only marginal, have been made in the wake of the Islamic Revolution of 1979, and how, despite the repressive measures imposed against it, the women’s rights movement has remained persistent, particularly in reaching out to society at large. The One Million Signatures Campaign for reform of family law is well-known for its grass-roots advocacy.

The case study on Palestine details the complex legal history and divides between the West Bank and Gaza, as well as the most significant women’s rights issues. It delves into campaigns such as the Palestinian Model Parliament (PMP), initiated by the women’s rights movement to insert women’s interests into the national discourse and agenda, advocating for laws and policies based on equality and respect for women’s rights. It also provides a listing of the strengths and weaknesses of such campaigns, for example, how they helped to mobilise widespread discussion in Palestinian society but failed to involve Islamists or their Muslim women sympathisers in the process.

What comes across clearly is that there is no one-size-fits-all strategy for achieving equality for women in family laws. Context matters for every campaign, as does the need to balance achieving the objective without losing ground in the long term.

The contributors to this edited collection adopt a variety of approaches. A few case studies are geared towards readers new to the issues: they briefly discuss some women’s rights issues or summarise campaigns. Several other chapters offer keen insights into evolving movements, contexts, and strengths and challenges in relation to advocacy. A couple of chapters are more academic, but nevertheless remain accessible to the general reader.

One disappointment is that the book as a whole does not examine, apart from in one or two instances, issues of intersectionality, such as those relating to migrant women, older women, or LGBT persons. Nor does it discuss in any detail the long-standing critiques of some women’s rights groups of being elite, educated, urban, and removed from the experiences of women from more rural areas. The inclusion of such critiques could have helped improve learning on outreach and coalition building with non-traditional allies, including the challenges that come with that.

These caveats aside, I highly recommend this book for women’s rights activists, policymakers, and students. While some of the language used does assume some prior knowledge on the part of the reader, it is for the most part accessibly written, and the breadth of its scope, in terms of issues and countries covered, means that it will help guide anyone engaging in feminist advocacy on reforms to family laws and violence against women.