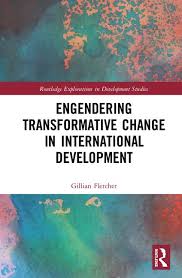 In Engendering Transformative Change in International Development, Gillian Fletcher seeks to explain the failure of international development to bring about positive change – particularly as it relates to gender equality – for the people and communities. The book starts with an overview of how and why ‘development’, in both theory and practice, operates as it does. Gillian Fletcher offers a whistlestop tour of the origins of development’s dysfunction and the inability to tackle what she identifies as development’s ‘wicked problems’. She suggests that ideas and programmes follow the (donor) money, which represents a built-in hypocrisy, particularly on the question of gender equality, where the largest donors are not themselves faring very well on the metrics for this measure that they champion.

A central focus for Gillian Fletcher is the nature of knowledge, which she considers in Chapter 2. That dominant frameworks and ideas, identified here as ‘fixed knowledge’, frequently and detrimentally undercut the more fluid and situated knowledge of local people is an important issue, and is tackled with a welcome sense of outrage and urgency. Gillian Fletcher  stresses the need to work in ways that are what she terms ‘generative’. This means that they are contextually specific, and start with asking ‘why’ problems exist in each context. Here, she draws on her experience of working on HIV in Myanmar, arguing that there is an over-emphasis on sharing ‘facts’ such as the efficacy of condom use with at-risk populations, rather than any real attempt to understand and engage constructively with the complexities of the lived realities of these groups.

Gillian Fletcher devotes an entire chapter to questioning the ‘gender norms’ that underpin how international development has approached the vexed question of sex work, raising nuanced insights into the multiple identities of sex workers. Whether self-identifying as men, women, or trans, she highlights the tendency to erase the ‘complexity’ of people’s lives with a ‘widespread focus on sex workers as “vectors of disease”’ (p. 55). Her in-depth insights into the diversity of lived experiences of sex workers in Cambodia draws attention to their exclusion and invisibility in the wider sphere of development work that is associated with gender equality and/or women’s empowerment. As Gillian Fletcher emphasises, ‘I have never met a woman who identifies as a sex worker and is included in an international development women’s project…they can only ever be engaged with in terms of one aspect of their lives’ (p. 48). It is surely an indictment of the pigeon-holing tendencies of development practice that this complexity and diversity is largely overlooked, and has, as Gillian Fletcher points out, been reduced to a narrow focus on HIV prevention.

Subsequent chapters then draw out concerns in relation to the practice of sorcery in Papua New Guinea. Gillian Fletcher suggests that there has emerged a tendency to label this as a form of gender-based violence (where women are accused of sorcery and/or witchcraft) rather than a question of a range of inequalities combining with religion and belief systems that vary across those islands, and with varying effects between and among men and women.

This is followed by a chapter on the Australian aid programme’s relationship with Africa, through a community engagement programme – Promoting Rights and Accountabilities in African Communities (PRAAC) – which ran across 11 African countries. Whilst noting the positive ambition of the programme’s commitment to ‘transformative change’ with marginalised groups designed to be ‘deeply place-based and empowering’ (p. 140), Gillian Fletcher is critical of the emphasis on numerical metrics to measure ‘success’ in these programmes, which she describes as ‘the tyranny of scale’ (p. 138). This tyranny, she argues, fundamentally undermines the participatory and bottom-up approaches the programme professes to extol and prioritise.

This has been a difficult book to review. On the one hand, Gillian Fletcher’s writing is accessible, and her anger is both palpable and entirely justified, in my view. On the other, the literature reviewed does not properly map on to the problems the case study chapters subsequently investigate.

A related concern is the lack of problematisation of her own lens, wherein the notions of ‘marginality’ and ‘bottom-up’ are valorised and elevated as markers of (gendered) exclusion that are both identifiable and, if properly tackled, the most important and only valid starting points for addressing the failings of development. This is not entirely unfair, but it is a partial reading of the development studies literature, which is extensive and damning in its critique of the institutional apparatus that supports development practice in the form she rejects. While she is rightly critical of this apparatus, there is no sustained engagement with the literature that would in fact support her analysis.

Further, instead of building an in-depth, place-based insight in a way that she herself notes is needed for the transformative, bottom-up change she envisions, she instead starts her analyses with broad insights on, variously, prehistoric migrations, a wide range of statistical indicators on poverty, HIV and gender inequality, and detailing the groups that fall inside and outside what she calls the ‘charmed circle’ (p. 28) of people who benefit from the existing system.

I can appreciate the ambition here – a broad, systemic re-telling is necessary if what you are demanding is nothing less than bottom-up, systemic change. Gillian Fletcher’s final chapter seeks to end on a positive note by presenting what she suggests is an effective project led by an Australian organisation, The Healing Foundation, which works to tackle violence – including genderbased violence – and promote healing amongst indigenous communities in Australia. But here she introduces another lens – the colonial encounter – and in detailing its historical harm does not really engage with the structural inequality that has resulted, or the relevance of this lens to the other case studies. Are ‘projects’ designed to ‘heal’ or ‘community engagement’ really answers for centuries of systemic, structural inequality? The history of change processes would suggest that solutions need to be both top-down and bottom-up to lead to longer-lasting change. There exists a large and critical body of literature that would have supported her to make this case more robustly, an opportunity she has, I feel, largely missed.