Gender and Risk-Taking: Economics, Evidence, and Why the Answer Matters 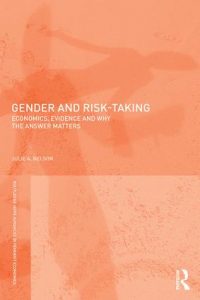 Gender and Risk Taking exposes the weaknesses in academic and common sense thinking that  understands women and men to have ‘fundamentally distinct natures resulting in divergent preferences   and behaviours’ (p. i). Such a book might be thought to be unnecessary in the 21st century when feminists have long argued that gender differences in behaviour are socially constructed rather than naturally. Nonetheless ideas about gender-differentiated behaviour remain prevalent in common-sense thinking and continue to influence employment decisions, political leadership, and the gender division of domestic labour and childcare. This book makes crucial reading for those who seek to challenge this view and to do so on the basis of rigorous analysis.

The idea of natural gender differences in risk-taking behaviour was popularised during the financial crisis of 2008. Christine Lagarde (CEO of the International Monetary Fund), amongst others, asked – if Lehman Brothers (the first bank to fail in the USA) had been Lehman Sisters would there have been a crisis? This remark was made partly in jest, but nonetheless it implied that rather than there being any problems with the financial system of neoliberalism, the crisis was due to the over-exuberance of the testosterone-driven macho men of Wall Street whose risky behaviour might have been curbed by the presence of more ‘naturally’ risk-averse women (Prugl 2012).

This view led to more research on gender and risk-taking, especially in behavioural economics, and some, but by no means all, of these studies claim to have found supportive evidence for the belief that women and men act differently when it comes to taking risks – with women being more cautious or risk-averse than men. However, Julie Nelson argues that authors, or commentators on their work, simplify and overstate their findings by stating only that the findings show that women are more risk averse than men when it would be more accurate to say: in our sample, we found a very small statistically significant difference in mean risk aversion between men and women, with women on average being slightly more risk averse. But the degree of similarity is also very high, with upwards of 95 per cent of women and men having the same degree of risk aversion (p. 138). This finding is more nuanced and complex, and less suited to the sound bites favoured by popular reporting and social media in particular.

Julie Nelson shows that the studies that find a gender difference in behaviour are far more likely to be published in academic journals and taken up by the popular press. They are seen to be newsworthy, confirming as they do pre-existing assumptions about gender roles, and challenging more critical feminist thinking. Studies that find no gender differences, however, are far less likely to be published, as they are considered less interesting.

To support her argument, Julie Nelson carried out an analysis of 35 academic papers. She demonstrates how the findings of these studies are both overstated and over-generalised. To follow the argument, there is one key analytical point that needs to be understood. This is that when comparing women and men’s preferences and behaviours, it is important to look at similarity as well as difference, and to recognise that there can be a statistically significant difference between women
and men’s behaviour on average, but this can be very small, and exist alongside a great deal of overlap or similarity between women and men’s behaviour.

In order to highlight the significance of her findings, Julie Nelson draws an analogy between gender differences in height, and gender differences in risk-taking. Within any given community, men are statistically significantly taller than women – so 95 per cent of the time, the next man you pass in the street is likely to be taller than the next woman. By contrast, in relation to risk-taking, on the best evidence the next woman you pass in the street would only be 5 per cent more likely to be more cautious than the next man you passed. What this means is that if you made decisions in relation to risk aversion on the basis of gender, you would be likely to be wrong almost half the time. In other words, the analysis provides no better foundation for assuming a difference in behaviour between any particular woman and man than would guesswork. Thus, decisions taken on the basis of differential gender behaviour would be based on prejudice rather than reason.

Julie Nelson builds up her argument carefully through a number of short chapters which begin and conclude by summarising the argument for the lay reader. The intervening material provides a more complex explanation for the more statistically savvy reader. Such discussion provides a framework for readers to challenge other studies analysing gender behavioural differences in this erroneous fashion, and to carry out new analyses more accurately.

Having effectively established her argument concerning behavioural differences, Julie Nelson asks: ‘So, is gender an important factor in determining risk preferences? The answer is no. But does this mean that gender is unimportant for the question of how we, as a society, deal with risky situations? The answer is also no’ (p. 137).

This second question is considered in the later chapters of the book. Julie Nelson points out that risk aversion, caution, or fear has generally been denigrated within orthodox economics. By contrast, the risk-taking, competitive behaviour of the rational economic man is considered in a positive way, theoretically and in practice. She contrasts this view of risk-taking with that in Psychology, where risk-takers may be seen as either ‘heroes or fools’, and how ‘too little risk aversion may be associated with unrealistic illusions of control that suppress the feelings of anxiety that might otherwise warn of danger’ (p. 118, Nelson citing Ronay and Kim 2006). She points out that these values might be critical when it comes to finance or climate change, and so economists need to recognise the social harm that arises from the encouragement of gender-stereotyped beliefs of risk-taking. Not only does the undervaluation of the significance of risk aversion, fear, or caution damage women as a consequence of their exclusion from decision-taking roles, but the exclusion and denigration of these values also threatens the ‘future of human life on the planet’ (p. 133).

Julie Nelson’s argument rests on a sophisticated re-interpretation of the quantitative analyses, but it is written in a way that makes statistically complex material accessible to readers with little or no statistical knowledge. As a consequence, the book is a must for any research student and any academic or policy worker, and indeed any enlightened decision-maker who wishes to make decisions on the basis of evidence rather than prejudice. The book ultimately challenges the idea that women and men have fundamentally distinct natures that result in divergent preferences and behaviours; and calls for decisions to be made on the basis of evidence rather than prejudice. If its arguments are taken seriously, it should assist in moving towards a more gender-equitable and sustainable world.