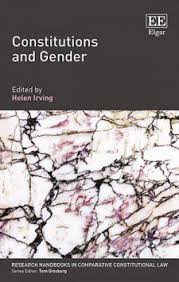 This timely book is the first in a series of Research Handbooks in Comparative Constitutional Law from Edward Elgar, which also produces a series of Research Handbooks in Comparative Law. This volume is the first of these handbooks to focus on gender. The editor, Helen Irving – professor of law at the Sydney Law School at the University of Sydney, Australia – has compiled 19 impressive chapters that serve as a corrective to the marginalisation of women’s experiences that is usually the case in most collections, which may have little or no coverage of gender issues.

The contributors range from distinguished senior pioneers in the field to junior scholars, and
come from a wide array of countries, including South Africa, Greece, Canada, Australia, the United
States, the UK, Spain, Germany, and the Netherlands. Most authors are members of the legal academy, but the areas of Public Administration, Political Science, and Politics and Public Policy are
represented as well. The readings are accessible to the generalist, and the book is ideally suitable
for scholars, practitioners, and students in law, political science, and feminist studies.

For the fortunate few involved in actual constitution-making, this volume is essential. I would
strongly advise anyone about to engage or engaging in constitution-making, as I did in three
societies many years ago, to study this work very thoroughly. My participation in the South African
post-apartheid constitution-making process over several years in the 1990s also informed my subsequent activities with respect to the development of the Palestinian Basic Law as part of the Oslo
Peace Accord process. Both of these experiences then influenced work I did on the post-genocide
Rwandan constitution. It would have been marvellous to have had access to a collection of this kind
when I was involved in these efforts.

While the book is clearly a wonderful addition to the genre, I will mention a few areas that could
have been strengthened. Among the book’s weaknesses are that it could have included additional
voices from the global South; more Asian, Middle East, and Latin American authors, in particular,
would have been welcome. Almost all contributors are women from Western countries. The sole
male author, John Kang, provides a unique and original perspective on gender, situated in masculinity
studies rather than feminist studies. In his chapter, ‘Patriarchy and Constitutional Origins’, he
shows that arguments concerning ‘manliness’ were central to the development of the constitutions
of Britain (unwritten, in this case), the United States, and Japan. He includes a discussion on the
American imposition of the post-World War II constitution on Japan, and the anxiety on the
part of its framers about ‘Japanese patriarchal masculinity’ (p. 12).

Despite the lack of authors from the global South, the book nevertheless provides a number of chapters examining the situation of women located in lower- and middle-income countries. For example, in Chapter 1, Silvia Suteu deals with women’s involvement in constitutional referenda, conventions, and constituent assemblies in Tunisia, as well as in Scotland and Ireland. Catherine Albertyn surveys the South African constitution-making process in Chapter 2. In Chapter 3, Johanna Bond discusses constitutional equality and customary law in several sub-Saharan countries. Wendy Lacey details the rights of older people in Chapter 5, contrasting Brazil’s more favourable provisions on duty to the family with those of Australia. In Chapter 7, Melanie Allen focuses on the ‘Constitution Assessment for Women’s Equality’ toolkit developed by the Constitution Building Program of International IDEA (an inter-governmental organisation which promotes democracy), and the trial use of the toolkit in Tunisia, Nepal, and Myanmar/Burma. Susan Williams addresses legal pluralism in Chapter 15, in part influenced by her own work in Liberia, Burma/Myanmar, and Libya. Her discussion of Islamic law makes the reader long for an entire chapter on this topic. In Chapter 16, Rosalind Dixon and Jade Bond’s coverage of constitutional cases on abortion includes Colombia as well as the United States, Canada, and Germany. Finally, in Chapter 18, Beth Goldblatt interrogates the gendered character of constitutional protection for social and economic rights with studies from South Africa, Colombia, Argentina, India, Canada, Uganda, and the Netherlands.

In addition to these state-based analyses, other contributions adopt a broader focus. In Chapter
9, Susan Millns discusses gender and constitutionalism in a supranational organisation, the European
Union. Wendy Lacey’s previously mentioned chapter is also notable for its inclusion of the
ways in which international treaties like the United Nations Convention on the Elimination of
All Forms of Discrimination Against Women (CEDAW), the International Covenant on Civil
and Political Rights (ICCPR), and the International Covenant on Economic, Social and Cultural
Rights (ICESCR) have been incorporated into national constitutions.

Few chapters take an intersectional approach in their coverage – effectively essentialising what it
means to be female despite the complexity of experiences of women within the countries discussed.
However, in Chapter 13, Megan Davis does engage in intersectional analysis when she focuses on
the constitutional recognition of indigenous peoples in Canada and South Africa, and then looks
specifically at the situation of indigenous women. In her chapter on women judges on constitutional
courts, Beverley Baines raises the question: ‘Would intersectional claims focused on race, ethnicity, gender, sexuality, religion, disability, age and/or other identities unite or divide women-dominated constitutional courts?’ (p. 312).

Caveats aside, volume editor Helen Irving does identify a number of important issues concerning
what further directions the study of constitutions and gender might take. She wonders if gender
inequalities might be addressed differently in civil law versus common law countries. Would
differences in presidential versus parliamentary systems matter as well as between monarchies and republics? How does gender manifest in the constitutional amendment process? Does strong versus weak judicial review play a role? Do constitutional compliance bodies such as a Human Rights Commission make a difference?

No doubt, there are numerous additional questions that could be and should be raised in the
future. Each chapter of this book certainly contains enough to be the subject of an entire volume.
There is clearly sufficient potential for an entire collection of handbooks on the topic of constitutions
and gender. However, the bigger challenge remains as to how to get more coverage of gender
issues into existing series and collections within the field of comparative law itself.