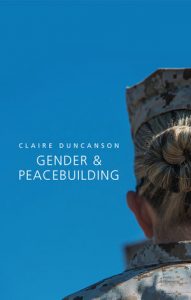 Gender and Peacebuilding by Claire Duncanson provides an excellent, critical analysis of debates about gender and peacebuilding. Aimed at scholars, feminist peace activists, and students, the book is clearly written, carefully organised, and convincingly argued. Each chapter is followed by questions for discussion, suggestions for further reading, and a list of relevant Web resources. The book is thus an effective teaching tool as well as a readable and thoughtful discussion of current debates. It begins by defining both peacebuilding and gender. Unlike peacekeeping, which has generally focused on containing conflicts, peacebuilding aims to foster the political, legal, economic, and social transformation of post-conflict states. This more ambitious goal became a central preoccupation of the United Nations (UN) in the 1990s, and has inspired considerable debate. Mainstream scholars and policymakers have focused on getting protagonists to the peace table, undermining combat and criminal economies, and instilling neoliberal solutions seen as necessary for establishing peaceful, prosperous, and democratic post-conflict states. In contrast, critical scholars argue that the neoliberal ‘solutions’ of mainstream institutions are more committed to maintaining the dominance of the global North than to ensuring the well-being of post-conflict nations. Debates on peacebuilding have remained polarised, caught between the proponents of neoliberalism and their critics, who see these ‘solutions’ as the latest form of imperialism.

While somewhat more inclined towards the critical, Claire Duncanson has discovered similar divisions between feminist scholars and practitioners concerned with ensuring gender equality in post-conflict states. Defining gender as both physical embodiment/sex and the symbolic identification of particular sexed bodies as masculine and/or feminine, Claire Duncanson highlights the role of gender, and other intersecting factors such as race, class, and sexuality, in the allocation of power in post-conflict societies. She points out that mainstream feminist scholars and policymakers have sought solutions through the UN Women, Peace and Security apparatus established to implement UN Security Council Resolution 1325, dedicated to increasing women’s involvement in peace processes and to reducing gender-based violence. In contrast, critical feminist scholars argue that peacebuilding is a neo-imperial endeavour more committed to making the world safe for neoliberal capitalism than to ensuring the human rights of people caught up in conflict. Claire Duncanson calls for a new approach, one that encourages both camps to focus on political economy, to accept the destructive nature of neoliberal policies, and to stress the need to empower women economically in order to build more gender-equal post-conflict societies.

Claire Duncanson carefully builds her argument for greater attention to political economy and women’s economic empowerment. She calls for more feminist theorising about how to facilitate the economic empowerment of women and other marginalised groups in post-conflict societies, and argues for a combined approach that will draw on both mainstream and critical feminist scholarship. In order for this to happen, she concludes both camps must acknowledge the crucial negative impact of neoliberal policies on the growth of poverty, inequalities, and conflict around the world. Indeed, Claire Duncanson argues that ‘The UN, donor countries, and international NGOs need to grapple with neoliberalism head-on if they are to achieve feminist visions of peace’ (p. 139–40). Moreover, drawing on Fionnuala Ni Aolain et al. (2011), Claire Duncanson argues that feminists concerned to ensure more gender-equal post-conflict states need to move beyond a commitment to small-scale enterprises for women, and to focus on expanding women’s economic possibilities through carefully targeted policies, including the use of gender impact assessments and gender budget initiatives.

In her conclusion, Claire Duncanson argues that peacebuilding will only enhance feminist visions of peace if it also challenges neoliberalism. This is an ambitious goal that demands calling into question established ways of thinking and acting. Women and marginalised groups clearly will have to play a key role in this transformation. Yet, the possibilities for change also need a more complicated analysis of women, gender, and power. Not all women are marginalised. Indeed, some are part of established neoliberal power structures, benefiting from their ability to enact masculine traits associated with power, or aligned with powerful men as supporters and allies. The fluidity of gender benefits those who can adopt gendered roles associated with economic, political, and social power. Class, race, ethnicity, religion, and other variables intersect with gender in the allocation of power. Claire Duncanson has quite rightly highlighted neoliberal policies and their role in maintaining inequality, but the gendered allocation of power has proven its resilience in many societies and times. While neoliberalism’s negative impact on the search for a more just and equal world must be understood and confronted, the role of gender and cross-cutting forces in the allocation of power in all societies calls for considered attention. A more sophisticated approach to masculinities, gender relations, and gender hierarchies, and their impact on the allocation of economic, political, and social power will be required. For a more gender-equal and socially just world to exist, the subtle but powerful gendered forces that maintain the subordination of many women and men around the world, particularly in the global South, but also in many parts of the global North, must be challenged.