Beyond Colonialism, Development and Globalization: Social Movements and Critical Perspectives 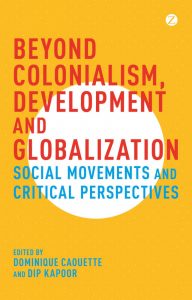 This is an important book that tackles multiple issues around the meaning and nature of development, its continuities from colonialism and into globalisation, the importance and challenges of social movements, and how and where NGOs do or do not fit into processes of radical social change. The book, an edited collection, attempts to cover a wide range of theoretical positions, and is supported by several strong and rich chapters on specific examples of organising for change. Consequently, while it is hard to sum up the arguments in a short review, it is possible to encourage people concerned with development to engage with and reflect on how the issues and ideas intersect with their own theories and practice.

The volume engages with many big ideas. One such is whether development is part of a larger ‘civilising’ process started in colonialism and continued into globalisation; a ‘modernisation’ project, which can in fact be better understood as one of discipline and social control – with different and specific forms of domination. This is challenging for those who conceptualise development as practised now as benign, inclusive, and enabling.

Another overarching idea is the rejection of Western-centric notions of development and modernisation by many social movements working at different levels in widely disparate contexts. Such a rejection relates particularly to the notion that growth and development can be delivered or fostered, measured, and evidenced, and above all controlled. This is especially pertinent for many NGOs, who are often dependent on and constrained by the funding, linear thinking, and demands of current aid paradigms. Operating within such paradigms means heavy reliance on being able to predict results in response to actions, and producing easily collected numerical evidence of change, which is then measured by concepts such as efficiency, effectiveness, and value for money. These are concepts far from the motivations and interests of the social movements and their aspirations presented here, and highlight the gulf between much of the current practice – though not the visions or missions – of NGOs globally and indigenous movements for change.

In terms of structure, the volume has three core sections, with opening and closing chapters providing key theoretical concepts, and guidance for reading. The first section concentrates on peasant and indigenous movements, with detailed chapters on India, Ghana, and Bolivia, all very different contexts, geographies, and histories, and with very specific cultures and challenges arising from these. These case studies illustrate the multiple responses to the different external processes imposed or promoted from outside over time, and reveal the different forms of subordination, resistance, and struggle, and the new knowledge creation and learning that emerge in opposition to these dominant processes. In their exploration of these ideas, the contributors examine a wide range of issues. These include the role, nature, and meaning of local action in different localities, and what can be done to connect these transnationally, and with what effects.

The second section considers the possibility and difficulties of ‘scaling up’ from the local to the transnational, and working across borders. This is something very much favoured in current development thinking but questioned here in relation to several specific issues, such as, how far action at the global or regional level actually enhances work at the local level, and whether it translates into real gains for, for example, the landless, migrants, peasant farmers, miners, women, or indigenous people. The issues that take centre-stage in this section focus on concerns with promoting food sovereignty, addressing human rights within immigration, the rights of migrant workers to decent work and conditions, land rights, and the challenge posed to global neo-liberalism, highlighting its negative effects on the poor and marginalised as seen in the work of the World Social Forum (WSF). While it is a strong symbolic structure, the WSF has so far been unable to take concrete action or make real changes in the lives of those excluded from the current growth paradigm and neo-liberal definitions of modernisation and globalisation.

The third section looks at the critical role of knowledge, academia, and ways of learning and teaching – those that promote hegemonic ways of thinking and being, and those that are needed to break the ‘silencing’ of those whose languages, cultures, and ways of understanding the world have been smashed or devalued through colonisation and modernising influences. These include a system of Western definitions of science, modernity, and delivery, exacerbated by the widespread use of ‘top-down’ experts. This is a rich section, providing new perspectives on the need for and different ways of generating alternative forms of knowledge. Chapters illustrate the importance of reclaiming the local, the indigenous, and the promotion of different forms of knowledge, evidence, and practice, via detailed case studies.

Issues of unequal power (which drive the analysis in many ways), relating to race and class are well covered in the volume, as are issues of indigenous thought and action, and their challenges to the current dominant modes of thinking around development and change. The volume brings politics squarely back into development debates, and shows how far removed technical approaches are from what is needed to really change the structures of exclusion and marginalisation. However, while there are some examples and perspectives from women’s movements and organisations, attention to the gender dimensions of exclusion, power inequalities, and the need for the full inclusion of women’s experiences and voices is somewhat muted in the overall analysis.

Having said that, this is a book that opens the mind to new ways of understanding the contemporary world, who has power and how it is used, and how different movements take and use their own power to resist, reshape, and create new knowledge and ways of acting and thinking. It breaks from the rather narrow and often sterile debates that currently limit thinking in aid agencies, and demands that we re-examine our certainties and frameworks, and open up to very different ways of thinking and practice. The many issues raised require from practitioners in development humility, a renewed respect for the dignity of the citizens we work with, and an understanding of their right to autonomy in setting their own agendas. It requires us to see the work as political, and to recognise those we want to work with as citizens, rather than defining them as clients, consumers, beneficiaries, and users of a technical project intended to provide off-the-shelf solutions to complex problems, delivered too often with little political analysis or understanding of context.