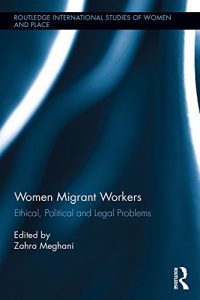 Zahra Meghani’s edited volume, Women Migrant Workers, makes a solid and timely contribution to current debates on migration and development, by bringing to the fore the ethical, political, and legal challenges facing governments responsible for safeguarding the rights of migrants. Building on earlier literature in the field of gender and migration, including the feminisation of migration, transnational families, global care chains, and remittances, Women Migrant Workers takes the field in a direction it needs to go by seeing women as workers, adding nationalism to its intersectional look at oppression, emphasising rights, examining policy impacts, and arguing for greater accountability of labour-sending and labour-receiving states.

Women Migrant Workers is a compilation of richly textured case studies examining the experiences of, for example, Filipina and Indonesian domestic workers in Singapore, and Mexican farmworkers in Canada. Contributors draw on diverse disciplinary approaches, such as political economy, history, economics, sociology, and law, to show how contradictory policies and asymmetrical power relationships curtail women migrant workers’ ability to exercise their human and labour rights.

The framing question of the volume – an important one to bear in mind in times of increasing xenophobia and violence against migrants in transit and destination countries – is not whether people have the right to migrate, but whether migrants, regardless of location or legal status, have rights. If the answer is a resounding yes, then the task, masterfully taken up by volume contributors, is to make the case for more just and transparent migration regimes that facilitate their enjoyment of those rights, and for comprehensive, co-ordinated policy responses on a variety of issues.

A major trend in migration policy is to offer only temporary residency to low-skilled workers which, as several chapter authors point out, hinders their ability to claim rights or access social benefits. Case studies from Ireland (Graham Finlay and Joanne M. Mancini) and Spain (Amaia Pérez Orozco), for example, examine how migrant domestic workers are subject to discriminatory labour, social, and migration policies, preventing their access to a basic standard of labour rights and social protection.

From the early 2000s, the idea of migration and remittances as a development strategy (the migration–development nexus) began to be touted by international financial institutions, including the World Bank. In Women Migrant Workers, feminist thinkers expose the ways in which the migration–development nexus is deeply inflected by neoliberalist thinking, with neoliberal policies playing a crucial role in putting labour migration at the service of the current model of globalisation. Delali Badasu and Sonya Michel trace how in the late 1990s, the Washington Consensus (the international financial institutions, and their market-based policy prescriptions) shifted from pushing structural adjustment policies (SAPs) to a paradigm of social investment (e.g. conditional cash transfers), arguing that this shift dovetailed perfectly with the emergence of the migration–development nexus. Not surprisingly, they point out, praise for the potentially positive effects of migration for development left out migration-related care work and the entire social context of migration for migrants and their families, leaving women as migrant workers and unpaid family care providers to fill in the gaps where necessary.

On the question of transnational motherhood, several authors take on the thorny issue of the ‘social cost’ of migration. In previous literature, feminist authors have tended to either sidestep the issue, decry the fact that absent fathers are not held accountable for the same, or take a defensive stance negating any causal relationship between mothers’ absence and negative effects on children left behind. Delali Badasu and Sonya Michel, in their Ghana case study, and to a certain extent Ofelia Becerril in her study of Mexican migrant farmworkers in Canada, call for feminists to take up the issue of the effects of maternal absence on children left behind – going beyond the polar extremes of mother blaming versus mother defending. They argue that only by squarely acknowledging the consequences can communities and policymakers address them.

The concept of global care chains continues to prove a useful analytical tool. Perhaps the most interesting chapters of the book are those that use global care chains to highlight the need for more just development models, which place care for human life at the centre of public debate (Amaia Pérez Orozco), and pay attention to the global circuit of capital circulating along the care chain, in which the capitalisation of labour (wherein migrant workers’ remittances become a source of capital for labour-exporting states) stymies efforts to empower women migrant workers and secure their rights (Stuart Rosewarne). The problem with this strategy, political economist Rosewarne points out, is that labour-sending governments have a vested interest in maintaining labour migration, because they may be borrowing or even financing infrastructure against future remittance flows. This is instrumentalist at best, exploitative at worst, and competes with states’ duty to defend the well-being and rights of their citizens abroad.

Women Migrant Workers can be dense reading at times and left me wanting to hear more of the migrant women interviewees’ own take on their situation. It is as if the authors focus on the structures, mention the women trapped within/between them, but do not zoom in on their faces or voices. The text includes occasional direct quotes from the daughter of a migrant mother, experts, an employer, but it is not until page 158 that we hear from a Mexican migrant farmworker in the first person. To echo feminist researcher Cynthia Enloe, if we are to take women’s lives seriously, we need to listen to and quote them liberally, and avoid burying their words too deeply within our work. They are the protagonists, after all.

To build on this work, researchers should pay attention not only to migrant women’s resilience and adaptation, but also to how they are actually claiming rights. The Convention on the Elimination of All Forms of Discrimination Against Women, and the International Labour Organization Convention 189 on Decent Work for Domestic Workers are mentioned only in passing in the collection, and yet are powerful, potentially under-utilised tools to combat discrimination and labour exploitation of women migrant workers. How are these being used around the world to bring national legislation into line?

Women Migrant Workers will be of interest to academics from a variety of disciplines who are studying migration (philosophy, political science, economics, sociology, anthropology, law, international relations, history, geography, gender studies, development studies, labour studies), and most especially those with a thematic interest in gender, human and labour rights, globalisation, and neoliberalism. It will also be of relevance to policymakers and civil society activists working to defend migrants’ rights, as most chapters offer concrete policy recommendations for state and non-state actors alike.

Yet the implications of the analysis presented in Women Migrant Workers extend beyond questions of migration governance. What is at stake when we closely examine women migrant workers’ experiences? Zahra Meghani et al. would argue models of democratic governance, human wellbeing, and life itself! Not to mention the outdated social security models designed to protect it. The larger question of sustainability, which is central to the new global development agenda, runs through the volume. If women’s migration for care work presented challenges for the achievement of the Millennium Development Goals, as Delali Badasu and Sonya Michel stress in Chapter 4, then it certainly will for the achievement of the Sustainable Development Goals. If public policies under current (neoliberal) development models continue to prioritise capital accumulation, and not the care work that keeps life going on a daily basis, then sustainability of life itself, as Amaia Pérez Orozco argues in Chapter 5, is indeed at risk. In the meantime, paying attention to women migrant workers’ ingenuity, resistance, adaptation, and new forms of solidarity may give us clues as to the innovative, transnational solutions that are needed.