Gender, Nutrition, and the Human Right to Adequate Food:
Toward an Inclusive Framework 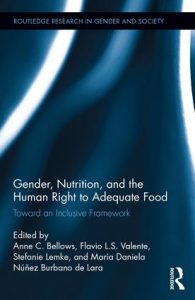 Chapter 1 presents the human rights system and frameworks as evolving social constructs. The authors guide the reader through a maze of acronyms, detailing the slow and creaky process by which the human rights system came into being, and painstakingly detail the gender equality omissions, obstacles, and missed opportunities (e.g. the instrument view of women as passive feeders of infants in the Convention on the Rights of the Child, and the omission of a right to food and nutrition from the Convention on the Elimination of All Forms of Discrimination Against Women; CEDAW). In addition, they cite the complementary and evolving legal instruments that enshrine various fragments of a gender-focused human right to adequate food and nutrition – and that show an evolution from patronising language about women’s ‘vulnerability, victimhood, weakness and need’, to rights-based language focusing on poverty and hunger as a result of structural discrimination, violation of rights, and systemic marginalisation of women’s voices (p. 65).

In the subsequent chapters, the authors present key arguments in favour of this expanded framework. Importantly, they highlight the violent nature of gender discrimination and the privation of women’s rights. In Chapters 3 and 6 particularly, the authors address gender-based violence as a fundamental impediment to women’s participation in public life and an institutional barrier to their right to food and nutrition. Noting that gender mainstreaming approaches often skip this subject, they argue that ‘silence on the topic of discrimination constitutes … de facto sanction … and propagates a cultural institution of women’s ‘vulnerability’ and their lack of self-determination’ (p. 108). They argue that the cycle of disempowerment – like that of malnutrition – is intergenerational, and that the use of violence is used to dispel protest and challenges for change.

Authors also critique the instrumentalisation of women in the way nutrition is addressed, with the ‘right to nutrition [perceived] as the selective right of children and pregnant and lactating women’ (p. 80), to the neglect of men and adults in other stages of the life cycle. They call for recognition of the rights to food and nutrition throughout the life cycle, as well as for greater inclusion of men in nutrition programming, to address harmful masculinities and reduce the disproportionate burden of nutrition security that falls heavily on women (p. 277).

Anne C. Bellows and María Daniela Núñez Burbano de Lara (Chapter 2) highlight the depoliticisation of food insecurity and malnutrition today, which occurs through an inordinate focus on food production systems to increase the supply of food – without attention to the politics of food distribution, the commoditisation of food, and the outsized influence of global multinationals, including producers of breastmilk substitutes and ready-to-use foods for the treatment of malnutrition. Stefanie Lemke and Anne C. Bellows (Chapter 5) also point out a gendered binary and artificial separation between ‘food security’ – with its focus on productivity – and ‘nutrition security’, with a medicalised intervention model that focuses on maternal responsibility, and corrective rather than preventive approaches (p. 261). Although the term ‘food and nutrition security’ has more recently come into use, they note the false dichotomy is still upheld in policy spheres, governance, and programming, as well as academia, with nutrition often being ‘colonised’ by either one or the other discourses.

In several chapters, the authors carry gender analysis of the intra-household power dynamics and linguistic discourse around food and nutrition to the global level, decrying the ‘paternalism of policy that promotes food and nutrition aid dependencies’ (p. 255). Drawing parallels between women’s and nation-states’ rights to self-determination (and the violence that silences them), the book names many contemporary threats to states’ self-determination, including land-grabbing by multinationals, the co-opting of rights-based language by actors with ulterior agendas, and the outsized voice of corporate private global economic actors in policy development (p. xxvii).

The final chapter of the volume aims to bring the arguments above and the fragmented legal precedents, articles, optional protocols, and binding agreements together into a cohesive and comprehensive food sovereignty framework, the ‘People’s and Food Sovereignty Framework of the Human Right to Adequate Food and Nutrition’. This framework re-implicates the nation-state as the ultimate duty bearer, responsible to respect, protect, and fulfil rights, and it sets out normative principles for ensuring a women’s rights and gender equality perspective in food sovereignty.

As a feminist practitioner operating in the traditional non-government organisation/donor system in the often male-dominated and ‘technical-fix’ space of food security, the issues highlighted in the book’s case studies are familiar to me, and I am relieved to see in print the strongly worded critiques that I try to call attention to in my own work: the aspect of gender-based violence as underpinning women’s decision-making disparities; the medicalisation of nutrition; the valuing of women only as reproductive vessels; the instrumentalisation of women’s rights in the name of achieving primary goals of better child nutrition; the notion that ‘the empowerment of women is linked to the empowerment of men, who must be enabled to break free from the “traditional male roles” ascribed to them’ (p. 276).

However, the volume as a whole seems to speak to a choir of the convinced, believers in the UN system and of gender rights and equality, readers comfortable with the jargon of academic feminism (such as, for example, ‘Intertwined subjectivities in utero: re/production of nutrition status over the intergenerational lifecycle’; p. 182), with the acronyms of United Nations (UN) instruments, and the underlying assumption that the ‘so-called neoliberal agenda’ (p. 2) is at odds with human rights achievements.

The supporting data are often self-referential, relying on select UN-based reports and compilations (FAO Sourcebook), secondary sources, and well-rehearsed statistics. The case studies are recognisable but thin, and some key claims go unsubstantiated or taken for granted. The volume touches a bit on everything gender-and-food security – including the evolution of the Women in Development (WID) to Gender and Development (GAD) development approaches, the cooption of the meanings of ‘empowerment’, and a critique of the sustainable livelihoods approach. While it is helpful to have all of these key arguments in one place, some are repetitive and others may have easily been left as footnotes.

The authors open and close the volume with the recognition that international law is imperfect and legal instruments necessarily evolve as the societies in which they are constructed become more enlightened, inclusive, and aware of previous limitations. Their project remains visionary and idealistic, arguing that ‘human rights promote a more precise diagnosis, and help overcome the root causes of inequities observed in society, which are linked to abuses of power’ (p. 341). Reading the documentation of the incremental pace of change through the UN system, the evolutionary nature of human rights expansion, and recognising that some of the most influential players in the space have not signed on to CEDAW, for instance, one cannot help a sigh of impatience (small wonder that the global private sector takes charge of the policy agenda!), at the inadequacy of this deliberate volume and beautiful framework to address the contemporary crises.

The authors present the writing of the volume itself as a new way of working – scholars at the University of Hohenheim assembled a diverse group of human rights experts and scholars from diverse fields, and for them, the process of collaboration and consultation has been as meaningful as the output. But the output is clearly intended for a particular audience, one well versed in and wedded to the sanctity of the international agreements – and, one senses, somewhat disconnected from the market actors, private sector actors, donors, and other influential participants in this sector. One hopes that in this ongoing process, the scholars find ways to expand their collaboration, to translate the crucial arguments in this book to other stakeholders, researchers, and activists, to democratise the debate, generate the data, and amplify the voices that will relentlessly shine a light on the violence and rights-violations underlying the global food and nutrition insecurity.