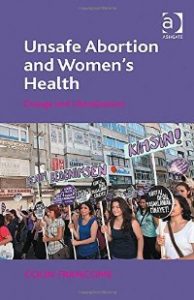 This new book, from a longstanding British advocate for safe abortion, is a rich collection of facts and information about abortion around the world, divided into chapters by world region and then by country.

Each region is presented first in overview, with data and facts. Each country summary opens with demographics, including population, religions, health systems details, then a history of contraceptive use and the development of abortion law and policy, what is known about the current situation and current practice, with data on contraceptive use and different aspects of the extent of safe and unsafe abortion in the country.

There are tables with statistics, quotes from authors who have written about the country, and much more. Each country summary consists of one to three pages of text, and the longer the summary, the more interesting it is. Countries like India, China and Brazil, as well as the US, Canada and UK, get a lot of attention, and are among the most interesting to read as a result. Some history and facts that people may not know are also provided, such as that a group of prominent women in France who were soon followed by a larger number in Germany in the 1970s announced in public that they had had abortions and asked to be prosecuted, which helped to change those countries’ abortion laws for the better.

The book opens with a global overview, and ends with recommendations on the need to make abortion safe for every woman. As an introductory textbook, for example, for undergraduates, medical students, and others wishing to get a picture of the situation worldwide, it is a very useful book. In a compact, consistent and clear manner, it presents a wealth of information. For those doing more in-depth research, it’s a good source to dip into for a wide range of facts and background about specific countries.

The fact that it is an overview, however, is both the book’s strength and its weakness. The reference list is 17 pages long, and they are good sources, including journal articles, books, reports by research institutes, news articles and more. Given the length of this list, however, it might have been helpful to have had some explanation as to the criteria used for selection. While much is included, there are also – to those familiar with the literature, many omissions. Of course, it would have been impossible to include everything that has been published, but it could, perhaps, have been pointed out to readers that the references do not constitute an exhaustive review of the literature.

Also, in many cases, the information presented is not as up-to-date as it could be, with only a dozen sources dated as recently as 2014. Given the time lines involved in book publishing, however, and particularly when publishing on a topic where the situation is changing on a weekly, if not daily, basis – as is the case with abortion in many countries – such a time lag is unfortunately hard to avoid.

That said, Unsafe Abortion and Women’s Health is quite an accomplishment and a valuable resource, bringing together in one place a wealth of information in one place on an issue of crucial importance to women.