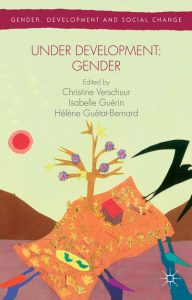 Books on gender and development have been charting and shaping the evolution of thinking in this field for several decades. They vary greatly in their sectoral or thematic focus, and in the extent to which they are more academically or practitioner inclined.

Under Development: Gender is among the former, being clearly about concepts and viewpoints that influence our thinking on gender and development. As the introduction makes clear: ‘This book , meant to be didactic, aims at providing keys to reading and mapping this literature so as to allow for a better understanding of the complexity of the interrelationship between gender and development’ (p.2). It follows that better understanding of gender in development should bring gender more into the light, from ‘under’ development both in theory and in practice.

The book is an edited collection and firmly rooted in feminist thought, as the first sentence in the Introduction states: ‘being compelled to constantly deconstruct and reconstruct generally used categories, feminist thought provides a major heuristic contribution’ (p.1). Fundamental feminist notions about social life guide the contents of each of the articles: that power dominates social relations; that women’s subordination still allows for interpretation and action; that gender is only one of the categories that determine the formation of masculinities and femininities alongside class, race, and so on, and that the interaction between productive and reproductive spheres is part of the mechanisms that cause inequality, non-development and conflict. Feminist ideas also inform the purpose of the book: this is a political project, intended to help renew and sharpen the tools for social transformation for the realisation of women’s rights.

This collection joins a long and rich feminist tradition of scholarship in the field: from Marriage and the Market (1) in 1981, toFeminists in Development Organizations: Change from the Margins (2) in 2013 (to mention just two). Such efforts continue to be much needed, given the ‘fear of feminism’ that, sadly, still dominates development practice and institutions (see Smyth 2007) (3), and the much bigger threats that ongoing crises and the globalised economic models which are their causes bring to women’s rights and to the wellbeing of all (see Lourdes Beneria’s chapter, ‘Neoliberalism and the Global Economic Crisis: a View from Feminist Economics’ in this collection).

Taken together, the articles provide a history of feminist thought on development, summarising and analysing a body of literature very valuable to both old and new generations of those concerned with development issues and intentions. The book can also be seen as being concerned with the geography of gender in development. This is not only because it is published in both French and English (with a Spanish version planned), but because it highlights the extent to which feminist contributions to gender and development from English-speaking and Nordic locations appeared earlier and have been more influential. Thus, the inclusion in this book of different perspectives, and the valuing of alternative points of view to the dominant and hegemonic ones, help to build much needed intellectual bridges between and within the global North and global South.

The book is divided into two parts. The first – Disciplines – includes chapters exploring the ways in which feminists operating within different fields (law, international relations, demography, sociology and economics) have used the notion of gender to develop new concepts and methodologies relevant to development. The second – Specific Issues – contains contributions that again use gender, this time to challenge dominant paradigms, and open up new debates on specific fields of study, including agriculture, migration, the economic crises, social movements and the solidarity-based economy.

The tremendous contribution that feminist thought has given to development-related disciplines is clear from the individual chapters. Yet it is hard to summarise their contents and to do justice to each. This is in part because, though all are informative and thought provoking – often providing useful reviews of historical developments in the particular discipline under discussion – they are not always easily accessible. For example, I found the material in Isabel Cristina Jaramillo’s contribution, ‘Feminist Legal Theory as an Intervention in Development Studies’, rather hard going (and confess to having to reach for a dictionary at times), but learned from and enjoyed the challenge. . I also struggled with understanding how the insights presented are applicable to current everyday practice. As a development practitioner, the question ‘what does it all mean for my work today’, often came to mind while reading this publication.

While the chapters in the book cover a wide range of issues, as a general comment it is worth mentioning that because of the selection of articles in the second section of the book (on Specific Issues), there is a slight slant towards issues of production and the economy. Perhaps to rebalance this leaning, Wendy Harcourt’s concluding chapter uses as an entry point the idea of ‘body-politics’. Though this introduces even more challenging theoretical constructs and ways of thinking, it clearly calls for closer collaboration and engagement with controversial forms of organising – under the general term of ‘Lady Gaga feminism’ – that are more ‘adventurous and creative’ ( p. 313) than gender and development has been so far. A healthily challenging call indeed!

This chapter contains, as well, a handy summary of the implications for development practice and practitioners of the ideas explored in different disciplinary contexts. This helps address my original question about the book’s usefulness for a practitioner.

While acknowledging the powerful influence of feminism for development in practice, via the introduction of ‘gender’ as a concept, Wendy Harcourt also points to the negative consequences of the recent history of gender in development: the threats represented by rhetoric around gender as ‘smart economics’; the various forms of backlash against women and their rights; and the growing dominance of the notion of women’s apparently inevitable vulnerability. This provides a valuable set of signposts for those engaged in development work, of which we should all take notice, whether we are academics and researchers or practitioners, or both.