The Routledge Handbook of Gender and Development 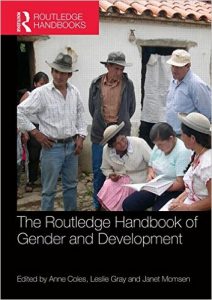 Part III provides a range of perspectives ‘on population and poverty’ (p.185), and begins with an excellent synthesis by Sylvia Chant of both hers’ and others’ theoretical contributions to the gendered dimensions and critical analyses of the ‘feminization of poverty’ (p.193) in the Global South. Sylvia Chant concludes by stating, ‘[i]f gendered poverty is to be tackled more effectively in future, it is crucial that the “feminization of poverty” is recast to adapt to the multiple deprivations encountered by women subjectively, as well as objectively, and that more empirically informed, imaginative, holistic and less instrumental ways are devised to ensure the attainment of comprehensive, and sustainable, gender justice “on the ground”’ (p.201, emphasis in original). Other chapters in Part III that I found particularly interesting were those by Ann Varley (‘At home in the city? Gender and urban poverty’ (p.204)) and Jo Boyden, Gina Crivello and Virginia Morrow (‘Gender, development, children and young people’(p.225)).

The focus of Part IV is on health, services and survival strategies. It begins with Barbara Parfitt’s robust framing chapter on gender and health, before moving on to more specific gender analyses of water governance, toilet provision, pollution and waste management in global contexts. Part V of the volume is entitled ‘Mobilities: services and spaces’ (p.293) in which we are led through a fascinating exploration of transnational care work, domestic labour, global migration, sex trafficking, and tourism. The section ends with a focus on those who are left behind in this transnational movement of people and labour. Also of interest in Part V is Salma Abbasi’s chapter concerned with the ‘Impact of ICTs on Muslim women’ (p.353). Here, the author draws on her research undertaken primarily in Pakistan, examining women’s use and experiences of ICTs. Salma Abbasi found that use of ICTs does indeed have ‘the potential to transform society by providing women with a knowledge and support network’ (p.361), and here she cites one respondent who commented that, ‘[t]he internet provides a vehicle for uncovering and shaming people who are misinterpreting Islam’s rights for women and allowing injustices to occur in Pakistani society’ (p.361).

Part VI of the Handbook provides four really interesting chapters offering the authors’ gender analyses of conflict and post-conflict experiences in a range of contexts. Adrianna Parra-Fox, for example, talks about La Ruta, an alliance of women’s organisations in Colombia trying to negotiate solutions to the armed conflict, while Ayesha Anne Nibbe’s chapter explores the ‘gendered implications of the interplay between camps, humanitarian aid organisations, and internally displaced persons in the context of conflict in northern Uganda’ (p.418). The focus of Part IV is on economic impacts of globalisation, economic restructuring and austerity for women and gender relations. Here Sally Smith, Elaine Jones and Carol Wills draw on a wide range of primary and secondary research in Asia, Africa and Latin America to consider the ‘benefits of women’s collective enterprise and fair trade as a route to overcoming gender-based constraints to engagement in markets’ (p.452). They summarise some of the key benefits as ‘increased access to services, information, markets, improved production and quality, and enhanced bargaining power’ as well as ‘important social benefits associated with being part of a collective enterprise, such as increased confidence and self-esteem, enhanced status and influence within households and communities, and a sense of solidarity and access to support in times of need’ (p.463). Other chapters in this section focus on entrepreneurship in Romania and in Sub Saharan Africa, microcredit in Bangladesh and Sri Lanka, and a consideration of the global restructuring of social reproduction. The final section of the Handbook is concerned with a gender analysis of development organisations, and the people who work in them. Thus in Part VIII we find chapters devoted to gender analyses of the landscapes of international development, the United Nations, and at the intersections of faith-based organisations and humanitarian interventions.

In sum, the Handbook provides an array of cutting edge conceptual and theoretical contributions to the field of gender and development. Its coverage, while vast, simultaneously provides a genuine depth and richness of detailed, considered scholarship and research. While I would recommend anyone with an interest in gender and development to try and get sight of a copy, at a hardback cost of around £170, it would likely have to be through an institutional acquisition, and even then, I would have some sweet talking to do to persuade my department, in times of austerity, to allocate this much of its library budget to a single volume. However, it would be worth it, as the Handbook constitutes a highly valuable resource for academics (selected chapters will provide core reading for a whole range of gender and development modules that I myself deliver at both undergraduate and postgraduate levels) and policy makers in the GAD arena. My only criticisms of the volume are twofold. Firstly, on an academic note, it is a shame that the work does not include a more balanced focus on GAD concerns in both the majority Global South and minority dominant Global North – such a lack of balance could lend weight to a populist misunderstanding that there are few GAD concerns in the ‘North’ – which, I have no doubt, is not the intention of the editors. Secondly, my criticism is a practical one: in an attempt to include so many contributions in a single volume, and with a mind, no doubt, on publication costs, the publishers have used a particularly small font, and the print quality is not the best. This makes reading more difficult, especially if age-related deterioration in eyesight is an issue. Assuming though, that many of the book’s readers will be students with younger eyes, the volume’s small type may not prove to be problematic.

These, however, are relatively minor concerns, when considering what is a major contribution to the literature, and one for which the editors and contributors alike should be congratulated.