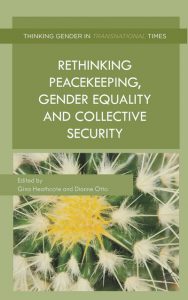 This edited publication contains articles for the most part rooted in legal and international relations perspectives, and makes use of the insights from a Symposium convened by the editors on Peacekeeping in Asia and the Pacific: Gender Equality, Law and Collective Security, held in Melbourne in 2012.

Debates on human security, peace, peacekeeping and gender equality involve complex and dramatic realities. Among feminists they have given rise to difficult discussions and contrasting positions. It is useful to note here that the understanding of ‘peacekeeping’ in the book is broad, and includes peace negotiation, monitoring, enforcement, peacebuilding, and mechanisms for provisional justice (Introduction, p. 6).These are areas of intervention that, to add to the complexity, are often undertaken by, or engage, very different actors.

The book is organised around four key themes, which emerged during the course of the Symposium: shame, hope, danger and silences. The choice of themes and their affective terminology is not only a device for giving an orderly structure to the publication, but was explicitly adopted in recognition of the fact that the intellectual and political positions of the authors are also connected to their passion and personal convictions.

UN Security Council Resolution 1325 looms large in the collection, as a springboard for analysis of what ‘the willingness to incorporate a gender perspective into peacekeeping operations [on the part of the UNSC] may have meant in practice’ (Introduction, p. 5). From this starting point, the book covers several subjects, looking at the historical struggles of bringing a gender perspective to the field, and the contestations within feminist thinking in these areas.

Notably, one such subject is the paradox of calling for women’s participation in institutions and activities of militarised systems that are so antithetical to the feminist goals of disarmament, transformation and redistribution.

An issue dealt with in several of the articles is the ‘institutionalisation’ of UN Resolution 1325 (and those that have followed) in the sense of the resolutions representing a technocratic, instrumentalist and tokenistic approach, ignoring women’s existing roles in peace building (see for example the article by Heathcote on post-conflict processes in Bougainville). Similarly, many contributors note that actual implementation of the 1325 agenda is sorely lacking, and relevant reforms remain gender blind (as illustrated by Stephanie Cousins’ evidence of gender mainstreaming in the Regional Assistance Mission to the Solomon Islands).

Chloé Lewis, among others, makes this the subject of her article, focusing especially on the three representations of masculinity dominant in the sexual violence in conflict discourse: ‘male perpetrator’, ‘strategic ally’ and ‘male victim subject’. Most of her attention goes to the first and last of the three, as their use combines to reinforce the notion of men as always perpetrators and women as always victims. Chloé Lewis acknowledges that possible solutions (gender separate, gender neutral and gender equal approaches) to the negative consequences of this complex interlocking of ideas are neither easy nor effective, at least so far. Her article manages to avoid the implicit condemnation of women’s rights advocates often to be found in discussions about the ‘silencing’ of men’s experience of sexual violence in conflict. It may have been stronger in this had the article not only juxtaposed the notions of (male) perpetrator and (female) victim, but also those of victim and survivor (both male and female).

Interestingly, in their Concluding Remarks article at the end of the collection, Judith Gardam and Dale Stephens frankly question the usefulness of some of the feminist debates on sexual violence in conflict, noting the dangers of their being distractions from pressing issues such as the protection of women’s social, political and economic rights (which the article by True attributes to the separation between the political-military and the socio-economic stabilisation pillars of UN Missions in conflict (and, I would add, in other crises).

Another theme occurring in several of the articles is that of the tensions existing among feminist advocates. The articles by Felicity Ruby and Dianne Otto help to explain a central aspect of these tensions: that between those who see ‘victory’ in the adoption of UNSCR 1325 and subsequent Women, Peace and Security resolutions on the one hand, and those who see only ‘dangers’ on the other. Felicity Ruby acknowledges the dangers, but is indisputably on the side of victory (or better, of celebrating the endurance and achievements of activist networks), and suggests that the value of UNSCR 1325 lies in its ability to be used for the prevention of armed conflict.

Dianne Otto’s account leans in the opposite direction. She is sensitive to how an emphasis on dangers may appear as a betrayal of feminist activism, and play into the hands of those who are inimical to it, but at the same time she is robust in pointing to how feminist advocacy is oblivious to the appropriation of key ideas by powerful international actors. She believes that this capture can be avoided if new positions – beyond danger and victory – are developed on the basis of a much deeper analysis of global power relations, and of the role some feminists may be playing in supporting western power over developing countries. Here, Dianne Otto sees feminist advocates as oblivious to the way in which western powers justify military interventions by presenting them as a response to the ‘terrible scourge’ (page 161) of sexual violence. Dianne Otto’s arguments are sharp and persuasive, but extremely challenging, as even the comforting notion that the UN Resolutions in question have fostered grassroots activism is challenged.

Though both articles offer glimmers of hope, Felicity Ruby’s idea of using UNSCR 1325 to prevent conflict remains perhaps too vague, while Dianne Otto’s proposition to dig deeper into power relations is very daunting, perhaps explaining why they appear in the ‘danger’ section of the book.

Whether by design or chance, the articles in the section on ‘hope’ are much more rooted in lived realities. Sharon Bhagwan Rolls’s reflects on how the Resolutions have been used to guide the activities of the Pacific Women’s Media and Policy Network on UN Resolution 1325, and especially their community radio initiatives.

In sum, this is an extremely informative, rich, and thoughtful publication, essential to all of those who – whether academics or practitioners in different fields relevant to development, conflict and peace, humanitarian response and so on – are interested in what lies beyond the basic notion of ‘women’s participation’ in peace keeping. It is, however, a demanding read because of the complexity and number of themes and positions that intersect within and between the different articles.

Both the Introduction and the Concluding Remarks offer very worthwhile reading as stand-alone articles, for the clarity of expression and sensitivity of language, and for the wealth of information – for example, on the watershed moments in the introduction of the various relevant UN resolutions – as well as for the guidance they offer to the contents of the individual chapters, their connections and contrasts.

On a less positive note, the book may not be fully accessible to all practitioners and advocates in this field, because of its appearance in English only, and because of the focus on Asia and the Pacific (with some references to Haiti, DRC and some others). In addition, it is often hard to appreciate the practical applicability of the material.

Despite this, appreciation is due, not only on account of intellectual value of the publication, but because of the personal histories of commitment and struggle that without doubt, lie behind these contributions.