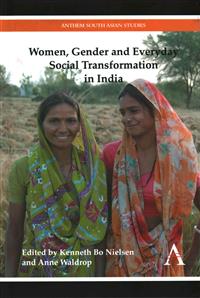 ‘The pace of socio-economic transformation in India over the past two and a half decades has been formidable’ (p. 1). This leitmotif informs this inquiry, comprising 15 chapters on everyday life and change in a globalised India. Anthropologists, Kenneth Bo Nielsen and Anne Waldrop, present a comprehensive introduction, by situating what they term the ‘Women’s Question’ into, ‘three historical junctures’ – the nineteenth and early twentieth centuries; the 1970s; and – a welcome analytical inclusion – the ‘current juncture’, which is being dominated by the debate on sexual violence (prompted by the Delhi gang rape of 2012) as the national media, sections of civil society, and the middle classes participate in these conversations.

The editors avoid the trap of conjecturing over whether the rate of sexual violence has risen, whether rape in general has become more brutal, and over perceptions that India is now unsafe for Western women. What is important here is that a crucial aspect of gender inequality has at last gained attention in mainstream spaces.

Part 1, ‘Work, Technology, Aspirations’, foregrounds the contradictory effects of a range of social transformations. The act of women leaving their homes to work at night, a growing phenomenon in India’s globalised cities, is addressed in Reena Patel’s chapter, ‘Today’s good girl’. Readers may be unaware that in 2008, Delhi’s Chief Minister, Sheila Dixit, came in for criticism over her insensitive remarks about Soumya Viswanathan, a young journalist, who was murdered in the middle of the night. The Chief Minister blamed Viswanathan for being ‘adventurous’, implying that the fault lay with her for venturing out at night. These notions pertaining to women’s mobility are problematised in Reena Patel’s chapter, with reference to the Business Process Outsourcing Industry (BPO). What is illuminating about this mode of employment – one where educated women opt for night work in call centres – is that it goes against the grain of traditional ideas about middle class female respectability. Thus, despite the fact that BPO work is well paid, it remains a stigmatised profession. However, Reena Patel captures the way in which these women, who are fulfilling their ambitions of engaging in paid employment, manage to skilfully placate spouses and family members. This chapter offers valuable insight into the contemporary middle classes’ highly ambivalent attitudes towards female employment.

Sirpa Tenhunen’s fieldwork in West Bengal, since 1999, proves to be instructive for mapping social change in the arena of communication. An over-arching observation is that while women now have easy access to Smartphones and mobile phones, they are still largely seen as a male entitlement (‘phones are associated with the men’s sphere’, p. 40). In rural, low-income populations, phones are not contributing towards the gender revolution feminists were hoping for. There are, nevertheless, subtle shifts that are proving to be significant to women’s lives, and their interpersonal relationships. Mobile phones are enabling married daughters to keep in close touch with their natal families. This is not causing friction with members of their husbands’ families, as might be expected. Unmarried women are also having a greater say in negotiating their arranged marriages via personal phone conversations. However, herein lies a missed opportunity by Sirpa Tenhunen. She does not entirely explain whether new technologies are accelerating love marriages and weakening the fabric of village caste endogamy, a subject that is critical for understanding inter-generational agency.

Harold Wilhite discusses how Kerala is witnessing a proliferation of global consumer products across the state. He evaluates the effects of such products through the prism of kinship and gender relations. This is a noteworthy inquiry, given Kerala’s image of progressive development indicators and egalitarian matrilineal systems. As his ethnography unveils, beauty products in the last two decades, such as fairness treatments and cosmetics, have unleashed pressures on young women: ‘A beauty ideal for women that is a precursor of recent globalization is fair complexion’ (p. 69). An ideal wife should have light skin and this contributes in finding an eligible groom while it puts strains on Kerala’s natal families. Even so, other everyday household technologies that are a product of globalisation are easing women’s drudgery, and providing certain kinds of relief. In reconciling these contradictions, Harold Wilhite argues that it would be a mistake to judge all changes as uniformly negative.

Part II, on ‘Democracy and the Developmental State’, focuses on gendered agency. All the chapters provide insight into how individuals and institutions can make a concrete difference. Dagrun Kyte Gjostein, for example, documents how a social activist in rural Rajasthan balances her political life with the everyday obligations of being a respectable bahu (daughter-in-law) in the conjugal home. On home-grown institutions, Mallarika Sinha Roy (p. 165) writes about the discipline of Women’s Studies in universities: ‘What distinguishes academic engagements of women’s studies is a sense of political commitment, closely linked with the history of the women’s movement on the one hand, and with contemporary women’s mobilisations on the other hand’. With her experience of having taught at Jawaharlal Nehru University, Sinha Roy describes the multiple challenges of pedagogical practices, outlining how student responses have become more complicated.

Part III, ‘Assertions and Activism’, explores social movements. Srila Roy’s chapter looks at how the Indian Women’s Movement (IWM) is adapting its framing of sexual violence and other feminist concerns, at a moment in time when the movement is deeply fraught. At the heart of Srila Roy’s fascinating narrative is the vibrant life history of Sumana, a feminist activist. Through Sumana’s biography we are privy to emerging forms of subaltern feminism, and the impact this is having at the grassroots. Alternatively, Romit Chowdhury engages us with a neglected area, namely, the politics of male movements in post-liberalising India. He attempts to get under ‘the skin’ of how men perceive themselves as victims of new gender-progressive laws, such as the Protection of Women from Domestic Violence Act (2005). Romit Chowdhury offers thought-provoking observations on how male activists invoke ‘westernization’ and ‘paradise lost’ (p. 193) to justify their claims of how the state has invaded the Indian family.

To conclude, one of the key strengths of this book is the meticulous application of an intersectional approach by all the contributors. A case in point is Karin Kapadia’s long-standing commitment to contextualising caste, class, and gender, evident here in her chapter on Dalit women’s conversions to Pentecostalism. This makes the volume both theoretically and ethnographically strong. The expansive range of topics provides us, as readers, with excellent glimpses into the complex transitions at play in modern India, and the generation of novel concepts (for example ‘Real New India’ as opposed to ‘Village India’, in Nicol Foulkes and Stig Toft Madsen’s chapter) gives us much to reflect upon. The volume will be of interest to students, practitioners, and scholars from the disciplines of gender and development, anthropology, and sociology and is equally of relevance to feminist theory and postcolonial studies. While this collection has been published in the United Kingdom and New York by Anthem, a local edition would benefit scholars in India, enabling them to have access to the rich ethnographic material included in the book.