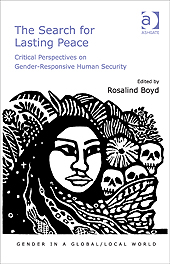 The Search for Lasting Peace is situated at the intersection of two attempts to rethink security from the perspective of people, rather than states: Human Security (first articulated in the 1994 UNDP Human Development Report) and the Women, Peace and Security Agenda (institutionalised in UNSC Resolutions 1325, 1674, 1820, 1882, 1888, and 1889, 1960). These efforts to develop alternative approaches to security, not surprisingly, have enjoyed significant levels of support at the United Nations (UN) and in civil-society (NGO) circles and less so in the halls of power in key states.

The result of a four-year (2000–2004) project on Gender and Human Security Issues (GSHI) at McGill University in Canada, led by Rosalind Boyd, this edited collection spans a period of significant debate concerning these issues: not only had the United Nations Security Council (UNSC) just passed Resolution 1325 on Women, Peace and Security in October 2000, the Canadian government had fully embraced the Human Security approach as its guiding principle for Canadian Foreign Policy, and the Commission on Human Security published its Human Security Now report in 2003.

As the book outlines, the Human Security (HS) and Women, Peace and Security (WPS) agendas have some significant overlap in their focus on security from the perspective of people, rather than states. However, most discussions of HS, whether conceptually or empirically, do not pay enough attention to gender – or if they do, gender is mentioned as an add-on. As Kristin Valasek notes in her contribution, gender tends to be equated with women, ‘women are often portrayed as victims or especially vulnerable and listed along with children and the elderly’ (p. 25), and intersections of gender with class, race, age, ability, ethnicity, and more are rarely noted. Her critique is also relevant with regard to the WPS agenda as the language in key UNSC resolutions too often positions the male experience of security as the norm, when instead ‘differences between and among women and men need to be acknowledged and explored as they related to security’(p. 25). At the same time, it is important to add a note of caution, since many see both the HS and WPS agendas as being slightly naïve in terms of their failure to recognise the power of traditional security narratives (Wibben 2011).

Since it is impossible to summarise a rich, edited volume such as The Search for Lasting Peace in a short review, some highlights will have to suffice. The initial chapters of the book (by Rosalind Boyd, Kristin Valasek, and Gunilla de Vries Lindestam) provide assessments of the shortcomings as well as opportunities embedded in the conceptual frameworks of HS and WPS, with specific focus on their impacts on the formulation of a country’s UNSC Resolution 1325 National Action Plan (NAP) and its implementation. A particularly rich aspect of the book lies in the case studies of genderbased insecurity in South Asia, the Middle East, and North America (in the chapters by Nang Lao Liang Won, Dolores Chew, Manal A. Jamal, and Laila Malik and Shree Mulay). Looking at the possibilities of the HS and WPS agendas in making a difference on women’s lives on the ground, they find significant limitations concerning the transformational potential of formal resolutions such as UNSC Resolution 1325. For example, as Nang Lao Liang Won describes, while the ability to link into international advocacy and solidarity networks around 1325 was crucial to the efforts of the Shan Women’s Action Network, a local women’s network to highlight the issue of sexualised violence perpetrated by the Burmese military, impunity abounds.

Highlighting the local and international dimension of the issues is a strength of the book overall; whether in Laila Malik and Shree Mulay’s chapter on refugees in Canada, or in the third section of the book which focuses specifically on the need to translate the WPS and HS frameworks into local contexts (with case studies on East Timor, Guatemala, Peru, the G-8 Africa Plan, and small arms proliferation).

This set of chapters (by Corey Levine, Colleen Duggan, J. Andrew Grant, and Wendy Cukier) highlight the difficulties of compartmentalising efforts to address issues that span the continuum of war and peace. This highlights a serious limitation of the HS framework: too often HS is thought of as replacing traditional notions of security concerned mostly with what happens during wartime, when it would be better to think of the two as connected. Peace- and wartime bleed into one another, and it is not always clear where one begins or ends; scholars working on security would do well to recognise this.

As the issue of small arms (discussed by Wendy Cukier and also Kristin Valasek) illustrates, especially when examined through the lens of gender, ‘we … see that the experience of men and women with guns are very different’ (p. 169) and that they straddle peace and wartime. HS approaches cannot focus only on ‘soft’ security issues such as human dignity and security through development. Instead, HS and WPS need to take the question of weapons and disarmament seriously as well (pp. 28–33) and address the full continuum of security as gendered violence.

The fact that the book is published a full decade after the end of the GHSI project, is somewhat problematic – these debates move fast (see Pratt and Richter-Devroe 2014) and new facts on the ground are established quickly (for example, Canada’s withdrawal of support from the HS agenda). What is more, in recent years the WPS agenda has increasingly been co-opted into the war on terror, and questions need to be raised about the dangers of a military interventionism that is justified by reference to women’s rights, an inherent danger in securitising these issues (see Pratt and RichterDevroe 2014; Wibben 2011).

At the same time, the WPS agenda continues to thrive thanks largely to activists pushing for their countries to develop NAPs and using the leverage, however small, that the UNSC resolutions provide in their activism beyond NAPs. Indeed, while ‘for many of us, these resolutions do not go far enough to confront patriarchy and militarism, and instead keeps us inside the same economic global system that contributes to these conflicts’, as Rosalind Boyd (p. 11) notes, ‘the UN remains the only body where we are able to address our concerns to all member states’.

This book is an important contribution to thinking deeper and acting smarter as far as gender-responsive human security is concerned – and it challenges us to broaden our analysis to think beyond those neat distinctions between peace and war or security and economics, that limit our analyses and actions. With concrete lessons learned and clearly articulated recommendations for future action, the book is an important addition to the excellent Ashgate ‘Gender in a Global/Local World’ series, and a must-read for practitioners and scholars grappling with the security–development nexus.