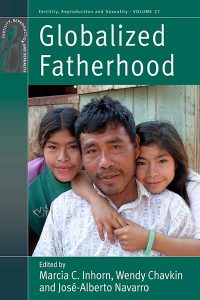 Today, fatherhood as an issue is in the news and in policy discussions. Declining fertility in much of the world, and women’s increased labour-market participation are leading to the increasing involvement of fathers in the daily care of children in some parts of the world. In these places, governments are re-examining their policies on parental leave and transnational corporations are offering paternity leave as a way to attract globalised talent. In spite of these trends, research on men’s participation as fathers, particularly in the global South, and from a comparative perspective, is still relatively scant.

Hence, Globalized Fatherhood, with its 16 chapters and original research on fatherhood (and related topics) from more than 20 countries comes at an opportune time. This impressive volume, emerging from a conference of the same title, covers a lot of ground. Themes range from corporate sector attitudes regarding paternity leave policies in the UK and Japan; assisted fertility and the global market in sperm; gay fathers and surrogate mothers; migrant mothers and left-behind fathers in Southeast Asia; infertility and infertile men (would-be fathers); the ‘bare sticks’ (men who neither marry nor father) of China; fathers of ill children; and ‘average’ fathers from Iran, Nigeria, and elsewhere.

If there are common threads or themes to be found in this wide-ranging book, they are change, ambivalence, contradiction, resistance, and tensions. Many of the chapters offer rich, ethnographic accounts of these tensions and contradictions. The chapter on the husbands of Vietnamese women who migrate for work while they (the men) stay at home with the children is fascinating for showing how individual men do change and do the care work, while at the same time keeping a foot firmly embedded in traditional, patriarchal norms. The chapter on fatherhood and marriage in Nigeria presents the multiple challenges for men – in the form of economic and family pressures – in the light of the ‘new’ Pentecostal religions, which promote both change and a continuation of patriarchy at the same time. The chapter on Iran offers a fascinating typology of fathers in terms of how they struggle to maintain traditional, patriarchal values while also letting elements of modernity into their children’s lives.

Another key insight from the volume is the tension that exists between individual change and structural or institutional change. The chapters present numerous examples of individual men who are doing gender differently: gay men adopting; traditional, Muslim men resorting to assisted fertility techniques that once were considered contrary to Islam; Mexican, Japanese, and Vietnamese men taking on new kinds of caregiving that were once considered mostly or only the work of women and girls. Up against these men, and the many others who are living change, we have structures and institutions: adoption laws, for example; the broader social norms that continue to view caregiving as the work of women; and men’s and women’s struggle to achieve economic stability. The chapter with interviews with UK corporate leaders revealing their open disdain for men (and women) who take time off for parental leave is brilliant for showing just where the resistance lies. As one corporate sector manager said, arguing that the highly sought after international talent pool they recruit is paid precisely to compensate for their limited family life, ‘No one would ever take six months parental leave –end of story’ (p. 44).

Not all the chapters contribute as much to a broad, global understanding of fatherhood. Some of the chapters offer a fascinating look at highly specific groups of men –infertile men in the Arab region and in Turkey; fathers who suffer from Gulf War Syndrome; men involved in a sexual health study in Mexico; and gay fathers from the US and Australia who hire surrogate mothers in India. While well-researched, these chapters call attention to the missing research on Arab fathers (not just infertile Arab men), military fathers (in general), more ‘typical’ Mexican fathers, or gay fathers (in general). Similarly, the chapter on the global market in sperm and the history of artificial insemination is intriguing reading, but the book cries out for a chapter, say, on men’s trends in participation in childbirth and antenatal visits, and the history of these, which are arguably as or more central to the lived experience of fatherhood. Likewise, the chapter on Palestinian fathers (from Gaza) who accompany their children for cancer treatment to Israel (there is no cancer treatment in Gaza). It stands out as such a moving piece of scholarship about human and fatherly perseverance in the face of adversity, that it deserves a book – maybe even a documentary – of its own. At the same time, it points to the need for more research on fatherhood and the effects of war and conflict, more broadly.

Another caveat is that many of the chapters are missing women’s perspectives. While we need to fill the research gap on men’s lives as told by men themselves, caregiving is relational. Some of the chapters imply women’s views but give us few insights on the relationship dynamics behind men’s changes and practices.

It is to the authors’ and editors’ credit that they cover so many themes and it is perhaps inevitable that in such an expansive survey of global fatherhood we are left wanting still more. Shifts in who does the daily caregiving, men’s involvement in abortion decision-making and contraceptive use (as a complement to the discussions of men’s infertility), fathers and families recovering from violence, and more research on the first generations of fathers who are taking paternity leave in some parts of the world, are among the topics that seem conspicuous by their absence in this volume.

In addition, for all the discussions of gender as performance in this volume, many of the chapters give only passing attention to gender equality: that is, how men’s limited participation in caregiving continues to be a major driver of the inequalities that women face. Indeed, a book that takes on a globalised view could end with a summary or analysis chapter that pushes us toward equality, and highlights the trends that are impeding it.

However, for me, the bottom line is that Globalized Fatherhood is an ambitious offering that hits the mark in most of its chapters, and advances the research in a field that is sadly lacking in it. May there be more volumes on the topic –by these authors, and many others.