Gender, Globalization, and Health in a Latin American Context 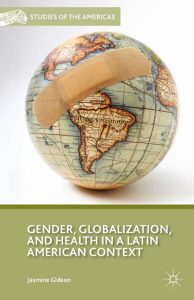 This is a lively, well informed and timely work which offers an important analysis of the complex relationships between health and gender, and which moves between a range of global, regional, national, and local influences on the social determinants of health, drawing on experiences in Latin America, particularly Chile, as an example. The origins of the arguments here combine development economics and feminist analysis, to provide a wealth of interesting detail on gendered experiences of health systems in Latin America, the role of feminist advocacy movements in campaigning for women’s health needs, the significance of paid and unpaid work, and migration, among the various factors impacting on women’s health in this region.

Central to this exposition is the development of a global-macro-meso-micro framework of analysis, which incorporates recognition of the significance at the local level of global structures including neoliberal inter-governmental organisations, together with the role played by gendered institutions in national macro- and micropolicy formulation and practice.

Jasmine Gideon begins with a discussion of the contribution of various feminist authors to a gendered political economy approach to gender and health, which includes recognition of the significance of unpaid care for economic structures and health outcomes, and its impact on opportunities for paid work. In addition, the often unacknowledged relationship between unpaid caring work and gendered health systems is explored. Jasmine Gideon adds to this debate, particularly in her observation that broader analyses of health inequalities need to recognise gender relations of power more explicitly, a point also made in the context of the limitations of gender mainstreaming, and the need to acknowledge the various ways in which health systems contribute to and help to construct notions of citizenship and entitlement, especially gendered citizenship.

This is followed by a discussion of the role of welfare in Latin America, including the part played by Western models of welfare systems in policy development, and the adoption of a breadwinner model, which both shapes women’s entitlement to services, and which helps to shape gender discourses. Within gendered health systems coverage is defined in relation to participation in paid work, leaving women’s access to health care dependent on their family relationships and male members of the household. The reluctance of policymakers to engage with feminist debates is set against the crucial role of feminist activists pushing for greater recognition of women’s needs and gender equity approaches.

Globally, many of the health sector reforms introduced in the 1980s and 1990s can be classified broadly within the neoliberal agenda, and although there were differences between countries in how reforms were applied, they were largely detrimental for women: the increased role for the private sector in the delivery of health care, greater competition between providers and the commodification of health care, a separation between purchasing and providing functions, the increasing role of prepayment schemes and use of user fees, and the greater emphasis on the individual and choice were changes which failed to address gender equity, and which affected access and coverage for women, alongside other marginalised or disempowered groups.

At the same time, changing patterns of paid and unpaid work in this region, following economic restructuring, held negative consequences for women, as well as other groups, particularly migrant populations. This included gendered occupational health risks such as unregulated employment, sexual harassment and gender-based violence in the workplace, and a lack of interest in occupational health risks among policymakers and researchers. The low level of participation in paid employment among women in Chile reflects longstanding traditions and rigid gendered cultural norms. While the rapid increase in women’s labour-market participation in recent years – which reflects global shifts in labour – has brought some positives, there are also negative health impacts, including the health costs of women’s double burden of paid and unpaid work. As Jasmine Gideon observes, the balance of health benefits and costs reflects other configurations, including, in particular, those associated with class inequity.

These shifting patterns of paid work are combined with the growing significance of migration in this region, reflecting globalisation of employment and the growing role of transnational workers in the care sector, for example, producing a gendered and racialised hierarchy in the labour market. Jasmine Gideon’s account of the health consequences of these shifts in global labour focuses largely on feminised migration from Peru to Chile, which is associated with a lack of health care entitlement or protection, in contrast to non-feminised migration from Argentina for example.

Overall, this is an informative and thoughtful book which offers readers new to the study of gendered dimensions of health in Latin America a very detailed analysis of health systems, especially in Chile, from a gendered perspective within a global context. Although the main focus is gender, Jasmine Gideon also identifies the importance of other inequalities and structural determinants of health, particularly the role of class and socioeconomic status, religion, and migrant status. While this book provides useful insights for activists and policymakers, the most obvious audience includes academics working in fields of health policy analysis, gender justice and health, Latin America and welfare, global governance, and development.

Gender, Globalization, and Health in a Latin American Context  is published by Palgrave Macmillan.
Review originally published in Gender & Development 23.2 (2015)