Women & Conflict in the Middle East: Palestinian Refugees and the Response to
Violence 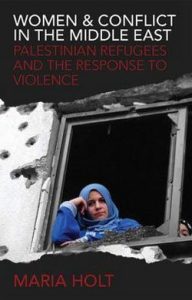 Maria Holt’s book Women & Conflict in the Middle East: Palestinian Refugees and the Response to Violence  makes a welcome addition to the literature on Palestinian refugees. It offers a particularly interesting perspective through its specific focus on women’s narratives, experiences, and definitions of violence, predominantly in Lebanon. (The book’s blurb states that refugee camps in both the West Bank and Lebanon are covered, but analysis in fact focuses largely on Lebanon.) Maria Holt foregrounds Palestinian refugee women’s own perspectives, asking ‘how women define “violence”, how their definitions may differ from those of men, and what tools they have used to protect themselves from many forms of violence’ (p. 3).

What emerges from her very large collection of different women’s voices is a rich picture on the various interlinked forms of violence – political, social, cultural, and economic – that refugee women in Lebanon face and struggle against.

Maria Holt’s aim, at the conceptual level, is to broaden definitions of violence based on women’s own accounts. This seems a very much needed contribution: although feminist writings on violence, displacement, and conflict have long proposed intersectional approaches, mainstream accounts still tend to single out so-called ‘personal’ or ‘private’ violence against women, treating it in an isolated fashion, unrelated to and prioritised over broader, more structural material forms of violence. Moreover, in the context of the Middle East and Islamic world, there often remains a tendency to ‘culturalise’ violence against women, finding its roots in Arab and/or Islamic culture, rather than ongoing displacement, political violence, and economic exploitation and/or disenfranchisement. Maria Holt warns against these traps. Yet, her chapter on ‘The Intimate History of Violence’ falls short of providing a coherent conceptual framework that would overcome such identified shortcomings. For example, Maria Holt acknowledges, that ‘it is not Islam as such that oppresses women’ (p. 70), but at the same time she foregrounds ‘tradition’ as cause for women’s inequality, arguing that ‘an association has been established between traditional family structures and the absence of women’s rights’ (p. 70). The fact that ‘traditions’ change, are (re)-constructed and -invented in the present, and thus are strongly influenced by present predicaments of political and structural violence is hinted at throughout the book, but never explicitly and systematically integrated into the author’s analysis. Instead, the chapter opens discussions on a number of different topics (the veil, ‘tradition’, domestic violence, Palestinian factionalism, the case of the Nahr al-Bared refugee camp, and so on) without systematically establishing linkages between them and/or tracing the intersections of different levels of violence and oppression that women face and struggle against.

The subsequent chapters (Three to Six) deal, respectively, with ‘the politics of place’, refugees’ narratives of al-Nakba (or ‘catastrophe’, when in 1948 Palestinians were expelled from their homes by the newly created state of Israel) and exile, refugees’ specific situation in Lebanon, and what the author terms ‘the politics of forgetting’. In each of these chapters, women’s voices, their narratives, memories, and experiences, take centre stage. The stories Maria Holt presents are vivid and varied; Palestinian refugee women speak from different backgrounds and circumstances, with different motivations and aims. Sometimes the author draws out these differences, such as, for example, when she develops an interesting discussion on refugees’ different notions and imagined versions of ‘home’:

This is also, as I note, a generational question; whereas many older Palestinians retain unmediated memories of their homeland, younger people, who were born in Lebanon, have developed more nuanced relationships with home. Their memories are coloured by war, insecurity and lack of rights in the place where they live. (p. 88)

Even more guidance through, and analyses of, the many interview passages that are cited in the book could have been provided, however. At times it is not clear who is speaking, when, where, and in what context. Contextualisation of the interviewee, and of the information provided through her/his narratives, is needed to bring out more clearly and systematically the ways in which refugees’ notions of home, refugeehood, ‘Palestinianness’, return, and so on, change according to various variables, such as age, residence, gender, political party affiliation, class, and others. Maria Holt interviewed a large number of Palestinian women (137) over a very long period of time (in total almost 20 years, with a specific focus on the period 1998–2007, and 2011) in different refugee camps in Lebanon as well as in the West Bank: it would have been interesting to know more precisely, what exactly has changed over time? How do refugees’ predicaments differ according to place (West Bank/Lebanon, the different camps, camp/city, and so on), and how does that impact specifically on women’s experiences, subjectivities, narratives, memories, and forms of agency?

Although perhaps more could have been made out of the fascinating and rich stories that Maria Holt collected, and some editorial lapses (e.g. spelling or syntax mistakes) should have been avoided, this book constitutes interesting reading for anyone working on Middle East politics, as well as on women and gender studies in the Middle East. The author’s call for a broadening of scholarly conceptualisation and understandings of violence, and for more careful listening to the ways in which women themselves narrate and make sense of the multiple, intersecting forms of violence that they face on a daily basis, is, without doubt, very much needed. It is through women’s own voices, as Maria Holt herself states, that ‘a more complete picture of the lives of “ordinary” individuals, the ones that history – in its grand and heroic sense – often ignores’ (p. 18), can be gained.

Women & Conflict in the Middle East: Palestinian Refugees and the Response to Violence is published by I.B. Tauris
Review originally published in Gender & Development 22.3 (2014)