The Politics of the Body:
Gender in a Neoliberal and Neoconservative Age 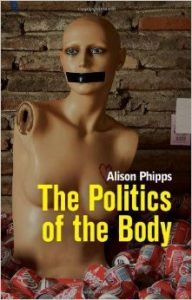 In 2008, Alison Phipps, Director of Gender Studies at the University of Sussex, set out ‘to reflect upon the difficulties of positioning for contemporary feminist theory and activism in a political context characterised by binaries and extremes and in which women’s bodies have become battlegrounds both material and symbolic’ (p. 2). Her thesis is that such debates take place in a political and intellectual context in which many of the values associated with feminism (and hence the gender and development agenda) – such as choice, empowerment, and voice – have fallen into (or been appropriated by) neo-liberal and neo-conservative discourses that stress the supremacy of the individual over the collective and the virtues of the ‘free’ market.

And that, perversely, ‘the rejection of neoconservative themes, agendas and institutions has within much feminist thought and action produced ideas and politics which can be seen as neoliberal in their emphasis on agency, “empowerment” and individual choice’ (pp. 3–4). To me, this suggests that feminism is bounded by the very ideas that it aims to critique; that its concepts and values become absorbed by the predominant ideology, which eviscerates them of critical content (1); and that we should therefore be less concerned to oppose than to propose.

Following an introductory overview, the first study examines sexual violence through the lens of the politics of victimhood, highlighting the allegations of sexual assault levelled at Julian Assange (founder of WikiLeaks), Dominique Strauss-Kahn (former International Monetary Fund director and French presidential candidate), and Roman Polanski (film director). Readers may recall that the international media reported the Assange and Strauss-Kahn allegations in salacious detail (2). What brings these allegations together, Alison Phipps argues, ‘is the suggestion from supporters that such successful and powerful men had earned the right to be treated differently from everyone else’ (p. 24) – indeed, some of Julian Assange’s most vocal supporters were women broadly associated with left-leaning feminism, such as Naomi Klein, Deborah Orr, Laurie Penny, and Naomi Wolf. While the right describes women who challenge sexual violence as ‘anti-men’ or ‘prudish’ feminists who are obsessed with ‘political correctness’, the left’s ‘discomfort with feminist “victimology”’ (p. 46) makes it harder to balance the reality of male sexual violence with the need to treat alleged perpetrators as innocent until proven guilty (3). In the UK, these issues are very much in the public eye in the wake of revelations of persistent cover-ups to protect television ‘celebrity’ sexual abusers rather than their powerless victims/survivors.

The chapter on gender and Islam explores issues such as attitudes to Muslim women living in Western Europe who adopt the niqab or burqa, which have become ‘a totem of essential difference … invested with almost animate powers and seen as essentially oppressive – or essentially empowering – outside the structural conditions under which they are either adopted or imposed (Ayotte and Husain 2005, 119)’ (p. 68). France’s much-publicised ban on wearing the full veil in public was an extension of existing prohibitions on conspicuous religious insignia, but has drawn supporters and detractors from all religious and political quarters. Debates focus on the extent to which maintaining a distinctive religious or cultural identity is compatible with integration into a secular republic. Double standards are rife. For instance, Alison Phipps points out that a Western man who kills his wife in a fit of jealousy is described as having committed a ‘crime of passion’ (in other words exceptional or out of character), while when the same act takes place in certain immigrant communities it is described as an ‘honour killing’, or a ‘culture-based crime’ (p. 69) that typifies Otherness and not so extraordinary. While this readily translates into ‘Islamophobia’ (or indeed any ‘phobia’ based on attributing essential and unchanging qualities to a stigmatised social group), a fear of falling into the trap of cultural imperialism can leave the left acting as ‘apologists for Muslim fundamentalism’ (p. 71). The post-modern emphasis on identity politics – which strikes me as the extreme expression of individualism – makes it harder still to develop ‘a truly transnational and effective feminist movement (Davis 2004; Mohanty 2002)’ (pp. 70–1).

The chapter on commercial sex work covers some ground that has, albeit in quite different ways, been recently addressed by Julia Long (2012) and by Meena Seshu (2013). Alison Phipps adds to this an exploration of representation or ‘voice’ and agency in a market for sexual services that is characterised by multiple inequalities (of gender, class, ethnicity, age, organisational capacity, education, and status – whether home-based and own-account or walking the streets and under the control of a pimp or trafficker, whether an occasional sex worker or whose livelihood depends on working the sex industry). There is a long-standing radical feminist argument that posits a causal link between the sex industry and male violence against women, which – paradoxically – also resonates with neo-conservative agendas on (female) sexuality. (Radical feminism has not traditionally been concerned with men and transsexuals who work in the sex industry.) A contrasting feminist strand regards women’s engagement in the sex industry, including pornography, as potentially liberating. While leaving questions of morals and motivations out of the equation makes it easier to look at the material conditions in which sex is traded, the corollary is that ‘if sex work has no intrinsic meaning, selling it, like selling any commodity, will inevitably reflect existing structures of inequality’ (p. 95). Alison Phipps highlights the neo-liberal ‘shift from concerns about sexual freedom and freedom of expression towards ideas about commodity choice, identity and rational decision making, all positioned within a largely individualistic frame’ (p. 99). Her concluding sentence merits a loud cheer: ‘sex workers should not need to be happy, empowered or to have chosen their profession in order to be able to demand rights and respect’ (p. 101).

The final case study examines contemporary childbirth and breastfeeding in the UK. It appears that attitudes and practices have become hardened since the early 1990s, when my children were born in an all-female midwife unit in a public hospital. The principal axis around which the chapter revolves is ‘the convergence between feminist critiques of medicalisation and conservative and religious discourses on childbirth and child rearing’, which gave rise to the ‘“natural birth” and breastfeeding movements in many western countries and which … resonate with the neoliberal frameworks around health care and neoconservative gender traditionalism’ (p. 105). And yet, for all the hype, a ‘normal’ or ‘natural’ birth is no guarantee that the mother will not be physically or emotionally traumatised by the event or struggle with the self-erasure that being a ‘good mother’ seems to demand. Similarly, even if one sincerely believes (disclosure: as I do) that ‘breast is best’ – free, sterile, on tap, always the right temperature and consistency, improves the baby’s immune system, and is natural contraceptive – it does not mean that breastfeeding will be painless, let alone pleasurable. What giving birth to and breastfeeding my own children brought home to me is that each experience is unique, that each is equally valid and that it is therefore misguided and even cruel to bully women into believing that there is ‘one right way’ to deliver and feed a baby – implying that other choices or outcomes signal moral failure and may even compromise the new-born’s welfare. Maybe some women do experience childbirth as ‘an attainment of physical and emotional ecstasy’ (p. 115), although I am hardly unique in having found ‘natural’ labour excruciatingly painful. So it beggars belief that a male midwife who asserts, never having felt them himself, that ‘women should experience painful contractions since they were a “rite of passage” which facilitated bonding with the infant’ (p. 115) should be allowed anywhere near a delivery suite!

Childbirth has attracted more than its fair share of cranks on the Earth Mother end of the spectrum – for instance, Primitive Mommy describes herself as: ‘a devoted peaceful attachment mother of three, alternative medicine advocate, raw food loving, juicing enthusiast, Intactivist, babywearing, Earth loving hippy, Lacitivist, altruistically trying to save the world from itself’ (cited on p. 126). But while many will find this beyond parody, the current mantra appears to be that pain relief interferes with the authenticity of labour and birth. I happen to be writing this review in hospital, having just undergone major (sadly, age-related) surgery. In every ward and waiting room there is a notice: ‘Pain is useless. As soon as you feel it, call for medical assistance immediately’ (translated from French). So why should it be shameful for women to opt for pain-free labour, provided that they are making an informed choice? The problem is that, as Alison Phipps comments, ‘“informed choice” is only as good as those doing the informing’ (p. 127) and, in a consumer-driven society, the line between information and advertising becomes blurred. Do nursing mothers need special bras or sterile swabs for their nipples? Do babies appreciate expensive clothes, luxury car seats, and four-wheel-drive pushchairs? In Western countries, the way to display parental love is to spare no expense from a child’s conception to the time she becomes financially independent. In the two-thirds world, however, childbirth and breastfeeding tend to be less enclosed – and lonely – and far less dominated by the clutter of consumer items. Not to invoke the naïve primitivism that Alison Phipps rightly criticises, I recall attending a meeting of Honduran women farmers when as one woman began to speak, her baby son piped up. Another woman simply picked him up and put him to her breast. Problem solved.

The Politics of the Body offers valuable insights into the insidious ways in which neo-conservative and neo-liberal agendas shape even our most intimate thinking and behaviour. While it does not pretend to look much beyond debates as defined in the UK, nor to set out a programme of action, readers of this journal will benefit from a rich and provocative set of arguments that could inform efforts ‘to revitalise the feminist politics of the body, reconnecting the personal with the political, instead of positioning it as an end in itself’ (p. 138).

1 This is the position taken by most of the contributors to Cornwall and Eade (2010).

2 Although the author makes ‘no attempt to decide on the relative guilt or innocence of the three men’, she claims that ‘Assange has tried to circumvent
due process’ (p. 27) by not returning to Sweden to be interrogated for a second time. Julian Assange has always said he would do so on condition that the Swedish government undertake not to extradite him to the USA, something it has refused to do. It is in this context that he offered to be interrogated by video link or for a Swedish official to travel to the UK to question him in person. A useful summary can be found at: http://www.theguardian.com/media/2010/dec/17/julian-assange-sweden/ (last checked by the author August 2014).

3 The author uses terms right and left in the political context of the UK.

Seshu, Meena (2013) ‘Sex, work and citizenship: the VAMP sex workers’ collective in Maharashtra’, in Naila Kabeer, Ratna Sudarshan, and Kirsty Milward, Organizing Women Workers in the Informal Economy: Beyond the Weapons of the Weak, London and New York:Zed Books

The Politics of the Body: Gender in a Neoliberal and Neoconservative Age is published by Polity
Review originally published in Gender & Development 22.3 (2014)