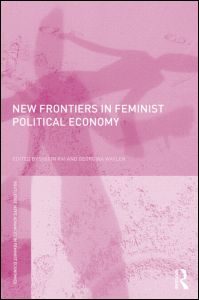 This outstanding volume summarises the gains and setbacks in progressing from the early stages of getting women into development thinking and practice, to the current state of a global feminist political economy that challenges dominant orthodoxies in economic thinking. It celebrates the lives and work of Professors Diane Elson and Ruth Pearson. As scholars, public intellectuals, and activists, the pair have shaped the field of feminist economics/political economy, and inspired a generation of scholars. This Festschrift volume provides both a fitting tribute to their scholarship and activism, and a significant addition to the literature on contemporary feminist political economy (FPE).

The collection maps important shifts from a gendered analysis of development to a global political economy focused not ‘simply on the market economy with growth and accumulation as its primary goals’ but on the ‘provisioning of human needs and human well-being’ (p. 7). An excellent introduction by Shirin Rai and Georgina Waylen summarises key contributions of Diane Elson and Ruth Pearson, from the work on ‘nimble fingers’ to an elaboration of the links between production and reproduction – including its extension to global supply chains – and Diane Elson’s work on male bias in macro-economics. The volume focuses on four central themes of FPE emanating from their work: understanding economies as gendered structures and economic crises as crises also of social reproduction; assessing economic policies through the lens of women’s rights; analysing global transformations in women’s work; and making visible the unpaid or care economy (p. 6). It locates the analyses within the context of a global crisis that ‘exposes yet again the inadequacies of the dominant models’ (p. 1), a theme elaborated by Diane Elson in her concluding chapter.

A valuable contribution of the chapter lies in its tracing of major developments in debates from Women in Development (WID) through Gender and Development (GAD) to a global FPE. Early observations of Diane Elson, Ruth Pearson and others in the Subordination of Women (SOW) collective, that the issue was not ‘that women missed out on “development”’ but that they ‘were incorporated into the spread of global capitalism in gender specific and often exploitative ways’ (p. 3) and that women remain the most flexible supply of global labour (p. 11), serve as a starting point for many of the subsequent chapters. These offer a robust critique of the view (now strongly back on the development policy agenda) that women’s labour force participation is the best route to overcome their subordination – an argument that ignores women’s role in the domestic sphere where work is unregulated and unrewarded (p. 31) and their overwhelming responsibility for the reproduction of labour on a daily and generational basis. The contemporary return to a more instrumental approach to women’s empowerment, along with a retreat from commitments to human rights made at the global summits of the 1990s, noted by several authors, shows the need to be reminded of past struggles, the fragility of gains, and the possibility of reversals.

In her chapter on ‘Gender, Globalisation and the Reproduction of Labour’, Ruth Pearson takes the entry point of women as workers in global production – a major theme of her work – to deepen the analysis of intersections between productive and reproductive work, and to argue for ‘foregrounding the role of the state’ in mediating and facilitating the ways in which relations of production and reproduction are interlinked (p. 19). Drawing on examples that illustrate shifts in women’s integration into global production – from export industrialisation to call centres, non-traditional agriculture, and global care chains – and the accompanying informalisation of their employment, she argues that the state largely determines the conditions under which women’s labour power is employed and reproduced (p. 20). Without neglecting the importance of women’s agency, or the role of voluntary codes of conduct, standards and rights at work, and civil society activism (discussed in more detail in the chapter by Stephanie Barrientos and Barbara Evers), she makes a plea for the rehabilitation of the structuralist context of a gender analysis of work and employment (p. 20).

Stephanie Barrientos and Barbara Evers elaborate on the potential of voluntary corporate and civil society initiatives, for influencing corporate behaviour with respect to women’s work and rights, and for improving the terms of women’s integration into global production networks. The bargaining and struggles they describe in a context of huge power imbalances, however, suggest the limits of such approaches and, as noted by Ruth Pearson, the importance of the state. Such approaches also fail to address the relationship between incorporation of labour into production processes and the gendered (re)production of labour itself (p. 26), as global capital is not required to pay generational reproductive costs of labour in its supply chains (p. 36).

Also starting from the intensification of women’s work in the global economy, Naila Kabeer turns our attention to the implications of such changes for men, exploring issues of ‘marriage, motherhood and masculinity’, and asks whether we are seeing a ‘crisis in social reproduction’ or a transition to new forms of organising it (p. 78). She explores how the boundaries between family and markets are being reconfigured by the spread of market relations, even as far as the commodification of care, sex, and marriage – global markets for which are ‘often characterised by extreme forms of exploitation’ (p. 78). Current social protection measures offer little more than piecemeal remedies to such conditions: instead (as other authors also note) there will need to be a fairer distribution of the costs of social reproduction, or in Ruth Pearson’s words – a ‘reproductive bargain’ that ensures ‘the full basket of entitlements for women to secure the reproduction of their own and their families labour power’ (p. 35).

Sylvia Chant and Katherine Brickell revisit a long-standing theme in the WID/GAD literature on the household or family in development theory and practice. They highlight the persistent gap between research and development policy, with the norms of marriage, motherhood, and heteronormative households still shaping policies in ways which often serve to undervalue women’s time, reinforce their domestic burden, or instrumentalise women’s empowerment in the service of poverty reduction (p. 105). As elsewhere in the volume, the gender arguments cut clearly across class lines, with Kate Bedford’s (2007) discussion of the World Bank’s idea that women should work more, men should care better (cited by Shahra Razavi, p. 129) being principally a prescription for the poor.

Shahra Razavi deepens the analysis of women’s care role and changing forms of social protection through a discussion of the ‘social investment state’ – in both its European and developing country manifestations (notably conditional cash transfers).

She asks how far social investment policies and welfare programmes reflect genderegalitarian goals, and concludes that while they may bring many benefits, the ‘futuristic instrumental rationality’ (p. 128) holds major pitfalls from a feminist and rights perspective. Echoing other authors, she notes that men are either neglected in the debates or called on to care more – again pointing to the limits of an agenda focused on the private sphere of caregiving without accompanying macro policies of job creation and public provision (p. 129). Similar arguments for the need to link a human rights approach to social protection, on the one hand, with more expansive macro-economic policies, on the other, are further elaborated by Radhika Balakrishnan and Sonja Thomas.

The papers by Irene Van Staveren and Marzia Fontana turn to some methods and models that could make gender more visible at the macro level of research and policy advice (p. 135). Irene Van Staveren’s examination of widely used gender indices, and their relationship with indicators of economic performance, suggests that for tracking and monitoring the gender effects of trends in trade, credit, and tax revenues, the indices are meaningful, although this is not true in the case of growth. In terms of economy-wide models, improvements in data availability and new generations of CGE (Computable General Equilibrium) models – reviewed in detail by Marzia Fontana – create the possibilities for more detailed representation of the non-market sphere, unpaid work, household structure, gender biases in markets, and gender-differentiated impacts. However, these issues are often incorporated in very partial ways or not at all. Marzia Fontana concludes that since the reason for such neglect ‘is unlikely to be a lack of information, it must be to do with the worldview of the modellers who have taken up the lead in this field. These are mostly fairly mainstream economists, who it seems, continue to treat gender as an ‘add-on’ category rather than an integral part of their analysis’ (p. 171).

A concluding chapter by Diane Elson brings up to date her work on economic crises with a gendered analysis of the 2008 financial crisis and the on-going ‘crisis’ of austerity and social reproduction. It illuminates why the issues elaborated in previous chapters need to be brought centrally into policy- and decision-making at national and global levels, showing the damage caused by the continued biases against women in macroeconomic policies and the impacts of financial and macro-economic policies that fail to consider the role of social reproduction and the need for social provisioning. Diane Elson’s major contribution to the most recent crisis literature is a conceptual framework focusing on the gendered global interaction of the spheres of finance, production, and reproduction (p. 197), linked through global institutions of finance, trade, investment, development assistance, and so on. She reveals an economic system in which ‘finance had come to dominate over production and reproduction, and in which the safety nets of last resort are provided by unpaid work in the sphere of reproduction’ (p. 198).

While examining the impacts of the financial crisis in the sphere of reproduction remains hampered by limited time-use surveys, evidence does exist from developing countries of increasing unpaid home-based production, distress sales of labour, and increasing poverty. For the USA, Diane Elson shows how gendered financial markets, particularly for housing, meant that women disproportionately held sub-prime mortgages, making them vulnerable to homelessness (p. 200). Of longer lasting concern may be the impacts of austerity and huge public expenditure cuts, often disproportionately hitting women’s jobs as well as key social and care services.

To move towards crisis-free gender-equitable economies, Diane Elson argues, ‘feminists must engage with financial governance, monetary and fiscal policies, and policies for structural change in production and consumption’ (p. 207). This comes together with the other recommendations of the volume, that progressive economists must integrate gender, social reproduction, and the household sector/unpaid work into their models and analyses; social reproduction and investment must become an integral part of economic policymaking; a human rights approach must underpin policies; and the state must be brought back in. On-going crises, as well as cautious language on women’s rights and gender equality in some key documents shaping the post-2015 process, underscore the fragilility of gains. Given the huge strides in theory, evidence, and analysis within the field of feminist economics and political economy documented in this volume, the question remains why the challenge to mainstream but largely gender-blind economics, institutions, and worldviews has not been more successful.

This book provides essential reading for everyone concerned with understanding the sources and persistence of inequality, and not only along gender lines. It shows that a gendered analysis of policies, from care and social protection to finance and investment, are essential – not just for women but for the functioning of the economy. It is an accessible and highly informative source for students and established scholars, activists, and national and global policymakers, providing evidence of what works and what needs to be done, as well as why we have failed to make more progress. One hopes above all that it will come to the attention of the ‘mainstream’ disciplines and agencies with power and resources both to shape economic and social policies at national and global levels and to support research, modelling, and policy analysis that can contribute towards an equitable and crisis-free future.