Love. A Question for Feminism in the Twenty-first Century 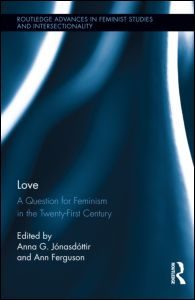 Love. A Question for Feminism in the Twenty-first Century is a collection of feminist essays which aims to contribute to the development of a new interdisciplinary academic field of ‘Love Studies’. The motivation for the book lies in the important insight that love, sex, and personal relationships remain significant areas for the exercise of gendered power, even if gender divisions in the market and public sphere come to be less pronounced. This is an issue of considerable relevance to Gender and Development (GAD) as both an area of practice and a field of scholarship, since GAD has put significant faith in the liberating power of women’s market engagement.

Unfortunately, however, the style in which the book is written is more appropriate for a specialist than a general readership, and the focus is more on theory and philosophy than the engagement with daily lives, especially in the global South, that readers of this journal would perhaps tend to expect.

The book contains 18 chapters which are organised into three sections, focusing in turn on sexual love, care work, and politics. While the chapters differ in style and topic, overall the orientation is towards literature and social theory. I found it quite hardgoing. On the one hand, I am very sympathetic to the general argument that the gendered dynamics within sexual and emotional relationships need more critical attention. On the other hand, the book did not convince me that a new field of ‘love studies’ is the way to advance this. To my mind, love is much broader than the quite restricted focus on sexual relationships that the book tends to take. In this way it reproduces the early bias within GAD, to emphasise gender dynamics within conjugal relationships (e.g. the household bargaining literature) at the cost of analysing gender in a broader range of relationships between men and women, adults and children, and indeed between women and women and men and men.

I also found myself questioning whether it is appropriate to focus on love rather than, for example, emotion or relatedness. Does concentrating on love leave scope for ambivalence, for the complexity of feeling that many of us experience in relation to those close to us? Is all of this a part of love, or is love only a part of what we feel?

The book makes only limited attempts to engage with other bodies of scholarship that are seeking to explore similar fields. There is already a field of ‘relationship research’, for example, which tends to be dominated by psychology and without doubt would be improved by more engagement with feminism. This is only mentioned in passing in the book. Psychology in general is surprisingly absent, given that ‘love studies’ is aimed to be an interdisciplinary field. There is also no discussion of anthropological work on relatedness which has grown out of the earlier concern with kinship, or indeed of recent work on sexuality in the context of international development.

When I was studying sociology, I remember one of my lecturers saying that there are some subjects, like love, that sociology should keep away from because it does not have the tools to discuss it in its own terms, it will kill it. I am not sure I agree, but I did struggle to find the energy and excitement of love in this book or – despite the claim that it is rooted in materialist feminism – the sense of embodied experience that I associate with it. Despite my scepticism about ‘love studies’, however, I agree with the basic insight that runs through the different chapters, that ‘affect’ or emotion plays a much greater part in personal and political struggles than either feminist scholarship or GAD practice has recognised. R.W. Connell suggested this back in 1987, when she theorised cathexis (desire, attraction) along with labour and power as the main structures of gender in society (Connell 1987). Despite being an unfamiliar word, I suspect cathexis might be a more manageable focus for analysis than love. Whatever term we use, it is clear that we need to get better at recognising and finding ways to talk about and act in relation to this part of our lives and experience that remains stubbornly personal, and yet is clearly also highly political.

Love. A Question for Feminism in the Twenty-First Century is published by Routledge
Review originally published in Gender & Development 22.3 (2014)