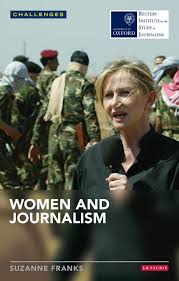 Suzanne Frank’s Women and Journalism is an insightful book which is in line with the current paradigm shift in women and media studies that is focused,   according to Louise North, on ‘examining the gendered nature of production processes’ and finding out ‘how journalists have experienced industry change’ (North 2009, 1). It forms part  of a literature that is not only concerned with the number of women in journalism, but the significant absence of women in top managerial positions and the considerable difference in their salaries (low when compared to their  male colleagues), and, more importantly, the diverse ways in which women experience the practice of journalism.

Suzanne Franks, demonstrating a great deal of empirical research, discusses the major issues affecting women in journalism: the high enrolment and graduation of female students on journalism courses but their low levels of employment in the media industry; the clustering of women in soft news areas (such as lifestyle, arts, and human-interest stories) referred to as ‘pink-ghettoes’ (p. 23); their inability to break the glass ceiling to reach top editorial and/or management positions; the exclusion of  older women journalists from visible journalistic roles; the pulling out of women journalists from traditional media after marriage or from the onset of childbirth (due to the hectic nature of the job); and the innovative and increasing opportunities that the new media, freelancing, and rise in lifestyle journalism hold for women.

In the first chapter, Suzanne Franks discusses the progression of women in journalism, showing the lack of steady growth towards the full equality of women in the profession. This is tied to something that  comes  up  in subsequent chapters – the assumption that  the problem of lack of access for women has been solved because a few  women have been able to break ‘into spheres of influence’ (p. 35). This is an important point, as it is crucial to see beyond the few success stories in order to sustain advocacy for equal opportunities for women in journalism.

Women and Journalism shows that media employers and entrepreneurs have a lot to gain from employing women in the media. Apart  from ensuring a ‘multiplicity of voices’ (p. viii), the author argues that  women journalists can bring a creativity and warmth into reporting that can generate  innovative content and reporting styles (pp. 31, 48).

In clear and uncomplicated language, Suzanne Franks presents a comprehensive account of what is a complex issue in an accessible style, making the book both an interesting read and a resource for academics, students, activists, journalists, policy- makers and civil society. It is particularly valuable for students studying journalism and gender studies. However, as comprehensive as Suzanne Frank’s work is, I see a concentration on the status of women journalists in the North, with little reference  to those in the South. This may be due  to  inadequate literature on  the experiences of women journalists in the South, or a lack of engagement with  what is available. There is an opportunity here  to analyse the status of women journalists in the South and how their forms of government and culture affect  their status. This is important because, as Suzanne Franks herself argues, ‘some of  the hurdles faced by women working in journalism are difficult to disentangle from the wider context’ (p. 53). Also, there is a general assumption in Women and Journalism that globally, the salaries of women journalists are lower (or different)  from  those received by men (at the same professional level). This is not the case in sub-Saharan Africa. Men at top management levels may enjoy some privileges of office, but salaries are basically  the same  for men and  women (Byerly 2011, 79).

Although Suzanne Franks refers very briefly to the fact that female faculty in journalism training are in the minority (p. 7), she did not elaborate further on the implications of this for the status of women journalists. However, other, researchers have come to associate the number and status of women in journalism education with the inadequate preparedness of female journalism students for the challenges awaiting them in the (news) media industry (see Beasley 2007).

What I appreciate most about Suzanne Frank’s Women  and  Journalism is the concluding chapter, which highlights familiar but essential steps that can be taken to make ‘realising the full potential of women journalists a reality’ (p. 53). This is indeed at the heart of  transformative  feminist  research, which is not  just  concerned with critiquing reality,  but taking steps to effect change, in this case, the situation of women journalists. This places the book in the tradition of the work of numerous feminist media scholars (see, e.g., Byerly 2005; Carter et al. 1998; de Bruin and Ross 2004; North 2009), who have all looked at gendered production practices and newsroom culture with the aim of furthering the cause of women journalists. Suzanne Franks’  Women and Journalism is a valuable addition to this body of scholarship.

Women and Journalism is published by I. B. Tauris
Review originally published in Gender & Development 22.2 (2014)