Organizing Women Workers in the Informal Economy:
Beyond the Weapons of the Weak 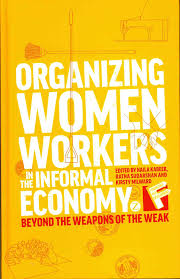 This Feminisms and Development title draws on the Pathways of Women’s Empowerment Research Partners’ Consortium. Andrea Cornwall is the Pathways director and also the overall editor of this promising new series from Zed. The set of detailed case studies – five from India, two from Brazil, and one each from South Africa and Thailand – is flanked by an extensive editorial introduction and a brief final reflection by Ela Bhatt, who pioneered India’s Self-Employed Women’s Association (SEWA), a trade union with over 1.3 million members. Although women’s empowerment takes myriad forms and directions, development projects that seek to achieve it almost invariably address some aspect of women’s inferior economic status relative to men’s, which is often compounded by lack of control over their conditions of work and the fruits of their labour.

Just think of all those cooking stoves and standpipes intended to slash the time women spend on domestic drudgery, releasing them to focus on ‘income-generating projects’ involving sewing machines, kitchen gardens, animal-husbandry initiatives, or community-based organisations. Around the world, microfinance organisations set up women’s groups on the pragmatic grounds that they are less likely than men to default on loans, while Conditional Cash Transfer (CTT) programmes portray getting their children vaccinated and educated as helping to empower women by bringing them into contact with government services. When it comes to women, the development industry apparently believes that the devil finds work for idle hands!

The underlying assumption is that the more cash women contribute to the household pot, or the less they need to dip into it, the more ‘empowered’ they will be. This edited volume shows that when women gain strength in one aspect of their lives there may well be a range of positive spin-offs – but it also makes very clear that this cannot be taken for granted. Achieving it is ‘a longer-term process that may take unpredictable turns’ (p. xi), and is ‘prone to wrong turns and false starts, with few ways to predict long-term outcomes’ (p. 44).

Globally, women are concentrated in the informal economy, either in self-employment or in insecure or precarious work that offers little or none of the social protection generally afforded to those who are in (full-time) formal employment – such as a guaranteed minimum wage, paid sick leave, maternity leave, and annual leave, as well as unemployment benefit and an old-age pension. Without being organised in some way (such as joining or forming a union, a co-operative, or a social movement), workers in the informal economy have little or no means to challenge unreasonable working conditions or outright mistreatment and denial of their basic rights. In many respects, women’s participation in the informal economy replicates their role in the household – their conditions of work are ‘geographically dispersed, socially isolated and frequently casual’ (p. 13), which impedes the development of a common identity around which to define and pursue collective interests. In addition, women often see their informal labour not as ‘real work’, but rather ‘as part of a looser notion of survival and livelihood activities’ (p. 14). These activities tend to be an extension of women’s conventional roles as carers, cleaners, cooks, and providers of sexual pleasure, ‘an elision of paid work with carrying out what would otherwise be unpaid care work’ (p. 11). For women whose work is rendered invisible (female fish workers in Tamil Nadu, domestic workers in Bangalore and Brazil, and Burmese migrants in Thailand) or is stigmatised (sex workers in Maharashtra and waste pickers in Pune), the recognition of their human rights understandably tends to take priority over fighting for their labour rights in a narrower sense: ‘for the most marginalized workers … the concern is as much about dignity as it is about income’ (p. 41).

The editors draw out some valuable lessons arising both from the case studies and from the wider literature on women’s organisational strategies in the informal economy. These are largely ‘concerned with the injustices of redistribution, recognition and representation’, in a context in which the trade unions have, by and large, had very little to offer to such workers. Women (and, for that matter, men) in the informal economy tend to define their issues in their local context, only later possibly linking up with wider structures and agendas. The pace at which they organise tends to be slow and meandering rather than making steady progress towards a clear direction. In addition, women may prefer ‘to bring about change on the basis of continuity rather than disruption’ (p. 43), securing small but tangible improvements in their actual conditions rather than defining their agenda as ‘the struggle against capital’ (p. 45). For outsiders working with such women, this means accepting and accompanying emergence rather than pushing for a predetermined set of positive ‘outcomes’.

Two other issues struck me as being of particular relevance to aid agencies. The first comes from the painfully honest chapter by Colette Solomon, describing the evolution, rupture, and potential recalibration of the relationship between a South African nongovernment organisation (NGO) and an organisation of women farm workers it had helped to bring into being. Over three decades ago, when I first began working in development, Northern NGOs were rather fond of proclaiming that their goal was to work themselves out of a job – although in practice they seem to regard themselves as indispensable. Here, too, the NGO was slow to realise that its protégé had come of age and needed to assert its independence. Tensions arose, for instance, about the fact that in public campaigns and advocacy, the NGO received the media attention although its sole legitimacy depended on its relationship with the membership-based organisation (MBO). This dynamic has been criticised in other contexts, whereby Southern organisations feel that Northern NGOs monopolise relationships with global institutions, effectively using their Southern ‘partners’ as theatrical props (Nyamugasira 2002) (1). Among the lessons Solomon draws is that there are ‘practical limits of cooperation between NGOs and MBOs given their respective origins, evolution and raison d’être’ (p. 97). This calls both for making explicit their ‘specific synergies and comparative advantages’, and for sufficient flexibility to ‘consciously and consistently [allow] the partnership to respond to changing realities’ (p. 97). Two insights that aid agencies should heed are that good intentions are not enough in view of ‘class differences and (shifting) power inequalities’ (p. 98); and that, as in any partnership, it is better to separate on good terms before it becomes mutually and irrevocably destructive.

The second issue concerns the waste pickers in Pune (Lakshimi Narayan and Poomima Chikarmane) and the sex workers in Maharashtra (Meenu Seshu). Outsiders often regard these occupations as inherently undesirable, and assume that the women are performing such distasteful work for lack of other options. Once women are regarded as victims, outside agencies define their mission as being to ‘rescue’ them. The case studies show, however, that while they are keen to claim their rights and reduce the vulnerability associated with their livelihoods, they do not want to be saved or redeemed, let alone to lose their source of income. ‘Most sex workers say they do not do sex work by choice or by force. The key issue is not whether choice is involved or not, but that they consent to what they are doing’ (p. 246). Similarly, a study found that ‘waste pickers were less engaged by the prospect of transferring occupations through “rehabilitation” than by the possibility of regulating and upgrading the conditions and livelihoods potential of the occupation they were in. Organizing as a union placed the waste picker as a “worker” and the issue of working conditions at the top of the agenda’ (p. 208). In India, handling garbage is associated with ‘caste ideologies that pair “unclean” tasks with (ritually) “unclean” people’ (p. 219), so a first step was to stress that ‘waste pickers do not make the mess, but rather clean up and organize other people’s dirt’ (p. 209).

The edited volume reflects the geographical bias of the event on which it is based, missing an opportunity to have commissioned contributions from a broader range of regions. More significantly, the issues this series addresses are by no means exclusive to ‘developing’ countries, and it would therefore be interesting for future titles to draw on the experiences of the swelling ranks of poor and marginalised women living in ‘developed’ countries (2). These comments aside, the book’s value lies in the rich analytical accounts of women’s efforts to get ‘beyond the weapons of the weak’ in order, in the words of Ela Bhatt, ‘to change their lives and their environment for the better and for the long term’ (p. 282).

1  Warren Nyamugasira (2002, 15) argues that rather than the current division of labour, the ‘free unhindered flow of, interaction with, and access to authentic opinions and experience in the South and to policy institutions in the North and the South is what one could call genuine partnership’.

2 Naila Kabeer (2000) has indeed written about the different ways in which women with similar cultural and educational backgrounds join the labour market, with social and economic outcomes that are significantly determined by where they are located.

Organizing Women Workers in the Informal Economy: Beyond the Weapons of the Weak is published by Zed Books
Review originally published in Gender & Development 22.2 (2014)