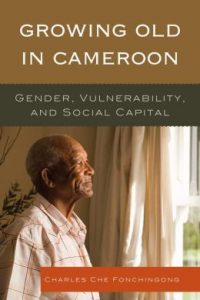 The near absence of essential services and basic infrastructure presents a daunting challenge for Africa’s rapidly ageing population, and it is against this background that Charles Fonchingong maps the adjustment patterns and coping strategies that retired people and those over 60 employ in Cameroon. Examining the emerging trends of social support networks (mutual societies and development associations) and tradi- tional mechanisms (savings and rotating credit schemes) in filling the gaps that exist in formal social security, Charles Fonchingong advocates a multi-faceted approach to supporting later life, based on a collaboration between the state, non-government organisations, support networks, and solidarity ‘fashioning a new social security policy for Cameroon’ (p. 214).

He evaluates the gender implications of population ageing for livelihoods in later life by unravelling the roles, opportunities, and constraints affecting older women and men, arguing that gender discrimination in earlier life stages, for example in relation to education and to land rights, results in significant differentials in later life. The author finds that coping mechanisms, adjustment patterns, and inequalities in levels of care and support vary both by gender and by rural or urban location. For example, those with pensions (40 per cent of men) are relatively better off than those without pensions (60 per cent of women), and rural dwellers with investments in land cope better than their urban counterparts without pensions.

Charles Fonchingong draws on social capital theory (which posits that benefits, economic or otherwise, can be derived from co-operation between individuals and groups) to conceptualise alternative forms of social security provisioning for rural and urban older populations from different religious backgrounds – Christian, Muslim, traditionalist, and non- believing. Exploring the experience of the ‘young old’ and the very old, he uses a gender analytical framework to extend the concept of social security to include participation in support networks, which he calls ‘semi-formal’, to reflect the overlap between formal and informal forms of social security coverage (p. 12). Such support networks include njangis (savings and rotating credit associations and schemes), mutual societies, religious/faith-based organisations, and village development associations. These support networks are, however, struggling to fill the gaps due to financial, organisational, and management challenges (p. 148).

Drawing on interviews, participant observation, and focus group discussions undertaken in urban and rural North-West and South-West regions of Cameroon in 2008, Charles Fonchingong challenges development assumptions that older people are ‘a burden and drain on the state, household and community’ (p. vii). He finds that a vast majority of older people do not constitute a burden but rather are assets to their households, communities and, therefore, society as a whole. For example, older people are not only involved in income-generating activities to secure livelihoods for themselves and their households – they play a key role in caring for their children and grandchildren.

As do most authors writing on global ageing, Charles Fonchingong has invested his text with nuanced and compelling arguments on older people’s welfare and well-being, global trends in population ageing and social security, forms of formal and informal social protection, and the impact of these on the welfare of older people in sub-Saharan Africa (SSA). He highlights both the benefits and limitations of a variety of theoretical frameworks such as Marxist, dependency, neoliberal, welfare, and modernisation approaches, as well as feminist critiques of welfare states and women’s subordination. He focuses on social capital theory as an approach to understanding the welfare and adjustment strategies that older people employ in urban and rural areas; and highlights the importance of attention to individual and collective agency in addressing older people’s well-being in the context of chronic poverty (p. 204).

Growing Old in Cameroon has a relevance that extends beyond Cameroon. The commonalities with wider SSA are highlighted, including the difficulties citizens encounter as a result of the near absence of state social service delivery (such as health care) and essential infrastructure, particularly water and electricity. This is alongside endemic corruption, institutionalised disorder, and patronage politics. All of these exacerbate the vulnerability of older people, particularly that of older women. The book, therefore, provides a useful introduction to the topic of ageing for students of gender, social policy and development, for policymakers – especially in SSA, and for development scholars and practitioners who focus on Africa. The author’s straightforward writing style makes it an easy and simple text with which to engage, in spite of the slight mix-up between American- and British-English spelling. While undergraduate and postgraduate students will benefit from the references to relevant literature, it is unfortunate that the book, which was drawn from the author’s 2008 PhD research, did not benefit from the latest data on Cameroon and on global ageing; nor was reference made to literature published after 2006 – perhaps a reflection of a long period in press.

It is reassuring to see the issues of social security provisioning for the older population in SSA addressed from a qualitative perspective in which older people are not treated as a homogenous and dependent entity. Instead, Charles Fonchingong considers older women and men from both rural and urban backgrounds, from the informal and formal sectors, and from various religions/faiths. The book’s policy proposals for social security development in Cameroon (e.g. a multi-faceted approach, and a research agenda on ageing that generates vital statistics and influences policy formulation) are applicable to the whole of SSA. Hopefully, this will encourage policymakers in the region to act to improve income security provision for older women  and  men; not taking their courage, resilience, and coping and survival strategies for granted, but instead designing more robust socio-economic policies. A starting point for most SSA countries will be assessing the needs of older people in order to inform the formulation of policies on ageing that take on board the Madrid International Plan of Action on Ageing and the African Union’s social policy framework action plans and recommendations to improve later life.